We are back with our English Premier League Fantasy recap, where we look over at what has happened in the previous round of EPL and unveil how our fantasy team performed. This recap will also include the results of Liverpool’s clash with West Ham, which was a rematch from round 18 and was played earlier this Wednesday. So without further ado, let’s take a look at the dream team of GW 24. 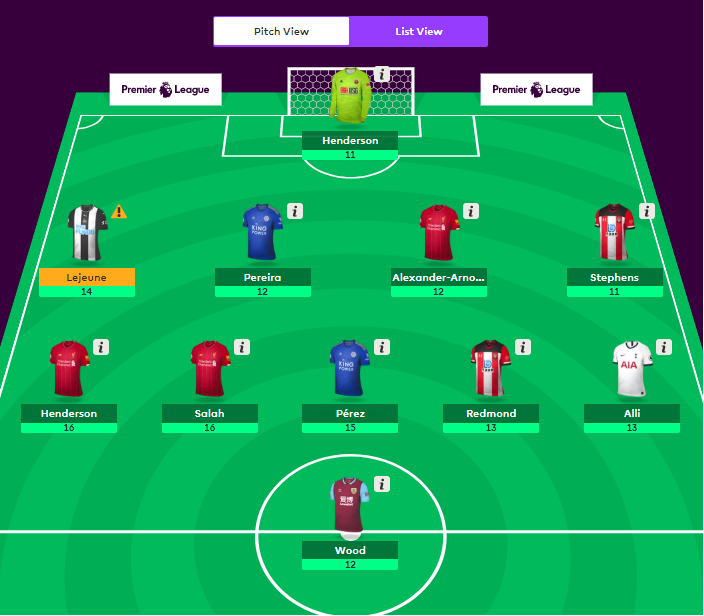 Dean Henderson (11) had yet another successful round of EPL, as he managed to put up an impressive display for Sheffield United who clashed with Manchester City. The match ended with Guardiola’s men winning (1:0), however, it was Henderson who shone bright with his contribution to the team. He ended the round with 11 points, which he earned with four saves and three bonus points, making GW24 his second-best round of this season.

In the defence, we have Lejeune (14), Periera (12), Alexander–Arnold (12) and Stephens (11).  Lejeune ended the round with 14 points, which he earned by scoring two goals against Everton, which is remarkable on its own, however, if we mention that he played for only 20 minutes, it makes his contribution to his team that more praiseworthy. With 14 points, GW24 was by far his best round so far this season, having played only six games so far this season. Periera, who finished the game week with 12 points scored a goal and added an assist in Leicester’s win over West Ham United, which was his second-best result of the season. Joining him in the back we have Alexander-Arnold who ended the week with 12 points, having earned five points against Wolverhampton and seven points in Liverpool’s win over West Ham. Stephens as the last defender of the GW earned 11 points, with an assist against Crystal Palace, which Southampton won 2:0.

Henderson (16), Salah (16), Perez (15), Redmond (13) and Alli (13) are the five midfielders who earned their spot in the dreamteam with incredible performances, which earned them all double-digit scores. Henderson scored a goal and added an assist against Wolves which earned him 13 points, but saw less success against West Ham, where he failed to reach more than three points. Salah on the other side earned only two points against Wolves, but shone brightly against West Ham where he scored a goal and added an assist, earning 14 points.

In the attack, the GW24 dream team had only one striker – Wood (12), who scored his 10th goal and booked his first assist of the season in Burnley’s win over Manchester United.

The dreamteam of GW24 scored 145 points, which was 22 points more compared to GW23 and the highest combined tally since GW10 (156 points).

Now for our fantasy team. 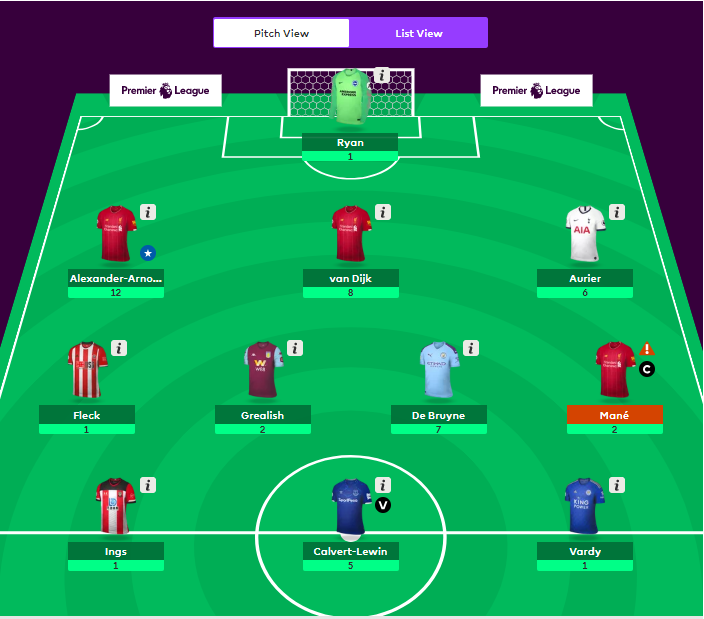 Ryan (1) ended GW24 with only one point, having conceded three goals against Bournemouth, which was a disappointing result, especially considering our substitute goalkeeper Pope ended the week with 10 points. But it is what it is, as we had no way of knowing Burnley will manage to upset the Red Devils.

Out trio of Alexander–Arnold (12), van Dijk (8) and Aurier (6) had a fairly successful week, as they combined 26 points, which is a solid result in our books.

Alexander-Arnold ended the week with 12 points with an assist against Wolves and solid defensive work against West Ham United, while his teammate van Dijk saw less success in the offensive end of the pitch, yet still put up a solid performance in the defence, which helped him earn eight points in total. Aurier on the other side contributed an assist to Tottenham’s win over Norwich and while the Spurs failed to keep a clean sheet, Aurier still managed to score a decent amount of points for our team.

Our for midfielders Fleck (1), Grealish (2), De Bruyne (7) and Mane (2) combined 12 points, which is disappointing, to say the least. Fleck and Grealish failed to produce anything noteworthy in GW24, while Mane, unfortunately, suffered an injury in the match against Wolves where he played for only 32 minutes. Due to the injury, he was also unable to play in Liverpool’s match against West Ham United, which meant he contributed only one point to our team this week, but because he was our captain, his final tally went up to two points. De Bruyne was the only midfielder who managed to produce solid points by contributing an assist for Man City against Sheffield Utd.

Ings (1), Calvert–Lewin (5) and Vardy (1) were our three strikers and considering they combined only seven points, it’s safe to say we were not too satisfied with their performances.

Ings played for only 20 minutes against Crystal Palace, which was obviously not enough time for him to do any damage in the offensive end. Calvert-Lewin on the other side managed to score a goal against Newcastle, however, even that was not enough for Chelsea to win, as the had to settle with a 2:2 stalemate. Vardy, as our third and last attacker, played for 42 minutes and failed to produce anything, meaning he has earned only one point this game week.

In total, our team earned 46 points, which was far from what we hoped to earn. While our defensive line performed well, we can’t be too satisfied with midfielders and strikers. All in all, it was an off week, where we saw some shocking results, which did not help our cause. That said, we will enter next week with a new plan and new goals, however, first we need to figure out what to do with the injured Mane. 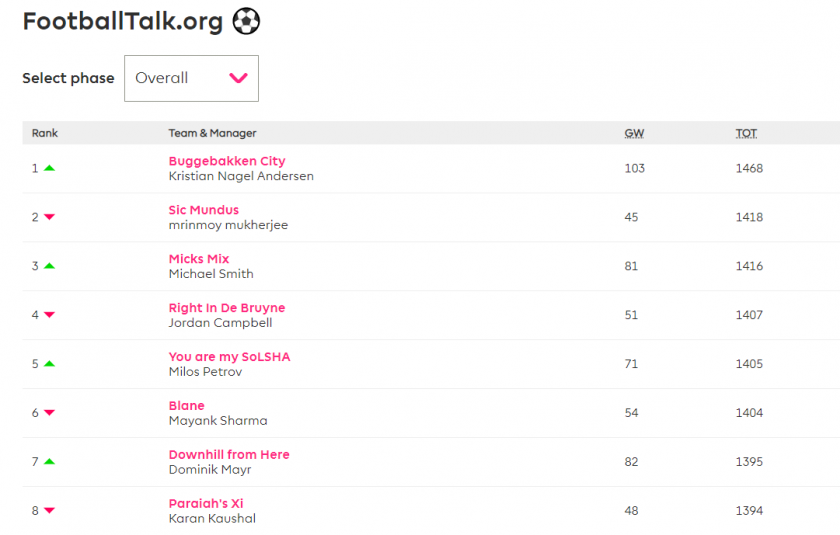 Kristian Nagel Andersen and his team Buggebakken City moved to the top of our Fantasy league and he had 50 points more than the second Sic Mundus. Kristian used the chip triple captain on Mohamed Salah which brought him 48 points from only one player. Many players failed with triple captain this round when they pick Mane, who picked up an injury in the first match. The difference is not huge, so we will see an interesting battle until the end of the season.