Round 23 of English Premier League has come to a close, yet only two days are separating us from round 24, so let’s not waste any time and jump into our GW23 recap, where we look at how our decision making paid off and how many points our fantasy team produced over the course of the weekend. 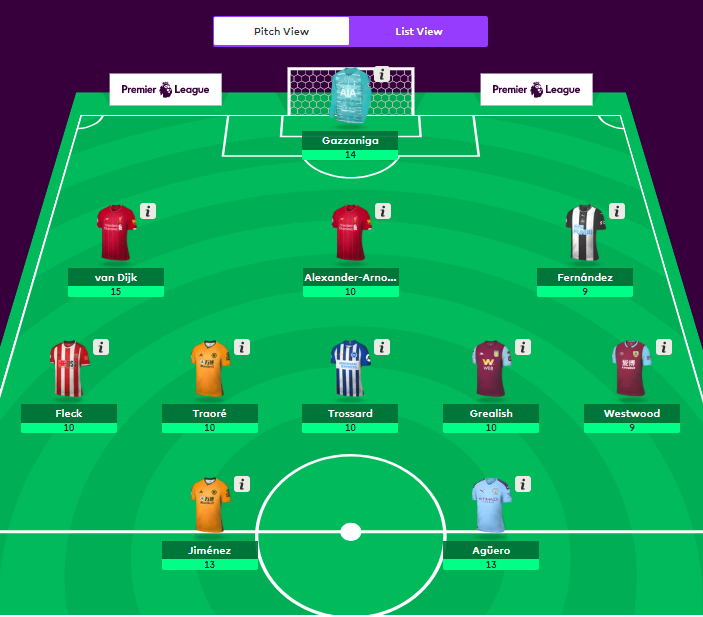 Earning his spot in the dream team for the first time this season is Tottenham’s goalkeeper Paulo Gazzaniga (14), who played a crucial role in Spurs’ draw against Watford earlier this weekend. While the end result was underwhelming, to say the least, Gazzaniga managed to prevent a disaster by saving a penalty, and with that saved Tottenham from suffering yet another disappointing defeat. Gazzaniga finished the week with 14 points, which is his best result of the season.

Fernandez (9), van Dijk (15) and Alexander–Arnold (10) are the three defenders who earned their spot in the dream team. The two Liverpool defenders played a crucial role in Reds’ win against Manchester United, with van Dijk scoring a goal and Alexander-Arnold putting up his 11th assist of the season. The duo combined 25 points, with van Dijk producing his second-best performance of the season, having previously earned 17 points in GW14. Fernandez, who was the third-best defender of the week ended GW23 with nine points, which he earned by keeping his goal untouched and added three bonus points in Newcastle’s upset win against Chelsea.

GW23 dream team featured five midfielders in Fleck (10), Traore (10), Trossard (10), Grealish (10) and Westwood (9). The quintet accumulated 49 points. Fleck, Trossard and Grealish and Westwood all scored once in GW23, while Traore contributed two assists in Wolves spectacle against Southampton and played a pivotal role in his team narrow 3-2 win.

The dream team featured only two strikers this game week – Jimenez (13) and Aguero (13). Both scored twice for their teams and earned 13 points apiece. Game week 23 marked Jimenez’s best performance of the season, while Aguero managed to continue his impressive streak, having scored five goals in his last two matches.

The dream team of GW23 combined 123 points, which was 15 points less compared to last week and the lowest combined tally since GW20 (114 points). 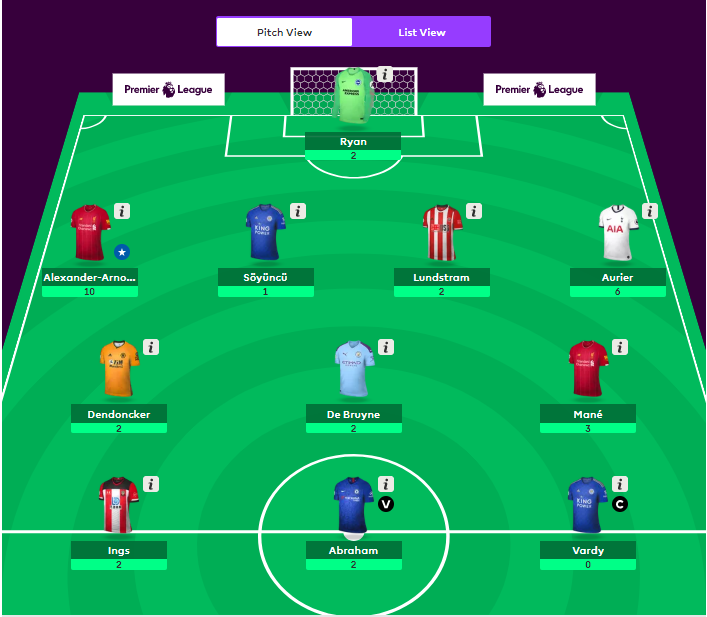 Now let’s check how our team performed, starting with our goalkeeper.

Ryan (2) ended this round with barely two points, after suffering a crushing draw against Aston Villa (1-1), which was far from what we expected to see. What makes his contribution to the team even more painful is the fact that our substitute goalkeeper Pope ended the week with 12 points. Pope was simply phenomenal in his meeting with Leicester, where he saved a penalty and produced seven saves. It was a shocking result, to say the least, but we have to make because of two points from Ryan for this week.

Alexander-Arnold earned 10 points with his impressive performance against Manchester United, where he contributed an assist and helped Reds keep a clean sheet. For his performance, he also earned a spot in the dream team of the 23rd round of EPL. While he impressed, we can’t say the same for the remaining players. Aurier ended the week with six points, which was a solid outcome in our books, yet we were not too impressed with what Lundstram and Söyüncü showed. Söyüncü ended the week with only one point, as he failed to deliver in Leicester’s defeat against Burnley, where he conceded two goals. Lundstram on the other side saw Sheffield Utd draw with Arsenal (1-1). With no bonus points, he ended the week with the base amount of two points, as he played for 66 minutes.

Dendoncker (2), De Bruyne (2) and Mane (3) were our three midfielders for game week 23 and combined a grand total of only seven points. Dendoncker failed to reproduce what he has shown in the previous week when he earned 10 points, which was not too shocking, yet we were taken aback with De Bruyne and Mane’s performances. We had high expectations for De Bruyne after his nine-point week in GW22, yet he underperformed in Man City’s meeting with Crystal Palace. Despite the fact the Sky Blues scored twice, De Bruyne was not involved in either of the goals and finished the week with two points. Mane on the other side suffered the same fate, as he was not involved in either of the two goals of Liverpool against Man Utd, which earned him barely three points for the second week in a row.

Much like our midfield, our attacking trio Ings (2), Abraham (2) and Vardy (0) had a very underwhelming week. Despite having very favourable fixtures ahead of them neither managed to score a goal nor did they manage to produce an assist, leaving us with a total of four points across all three.

Ings and Southampton clashed with Wolverhampton, where we saw a total of five goals scored. Unfortunately, Ings was not involved in either of the two scored by his team despite playing for full 90 minutes. Abraham, on the other side, suffered a crushing defeat against Newcastle (0-1) where Chelsea looked completely lost. Suffice to say, he did not score a goal, nor did he contribute an assist in 79 minutes he stood on the pitch. Last, but not least, we have Vardy, who fell flat and had one of the worst performance of the season. He earned no points, which was a hard pill to swallow, seeing how he was also our captain.

Our team combined 32 points, which was our worst score since GW9 when we earned 29 points. Our team lost the most points due to our mistake of not fielding Pope and Grealish who scored 12 and 10 points respectively. Other than that, this game week was a complete mess, with favourites underperforming and underdogs overachieving. Nonetheless, we will look forward and forge a plan on how to improve upon this result comes GW24. 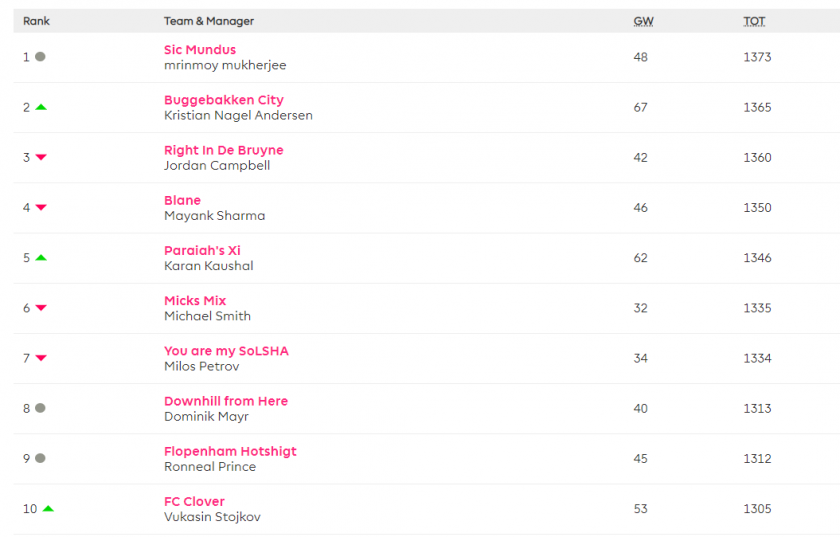 There are no big changes at the top of the table. All top 10 fantasy teams have more than 1300 points and the difference is not high. All can be changed in the GW 24 when Liverpool will have a double game week, but both matches will play away (Wolves and West Ham), so try to have three players from the leader of EPL.