Fantasy Tips for Gameweek 23 of English Premier League are ready, meaning it’s once again time for us to provide our EPL GW 23 preview, where we look over our team from last week and unveil the changes we have made heading into the next weekend. So without further ado, let’s jump right into our EPL GW23 preview. 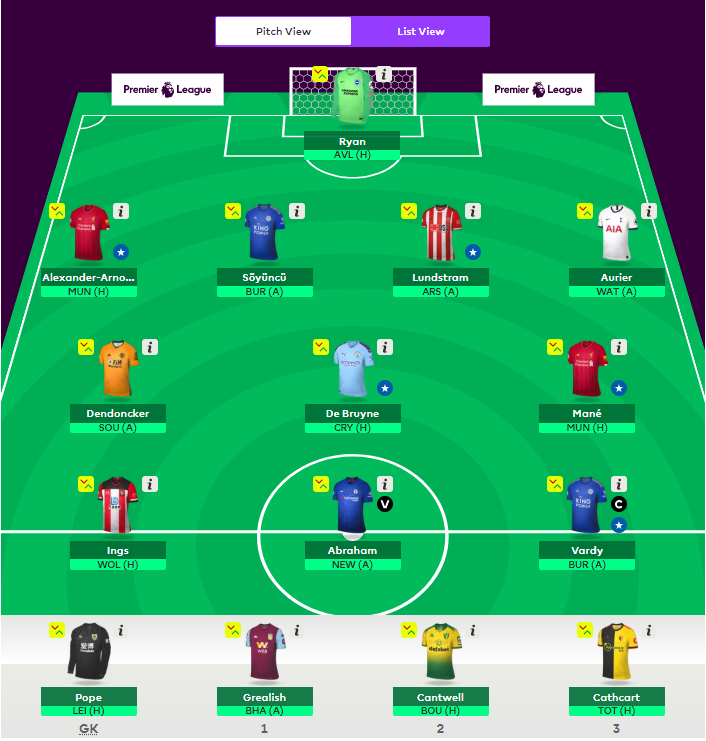 For GW23, we have decided to field Ryan, who will meet with Aston Villa, instead of Pope, who is set to clash with Leicester. While neither fixture will be easy on our goalkeepers, it’s obvious that Ryan should have a fairly easier time keeping his goal untouched compared to Pope. Ryan has earned three points last week against Everton and three in GW 21 when he met with Chelsea. While keeping a clean sheet here might be tough, we would not be surprised if Brighton’s defence manages to keep Aston Villa from scoring. Ryan has accumulated five clean sheets so far this season and we will hope he can add his sixth this weekend.

For next game week, we will field four defenders in Alexander-Arnold, Söyüncü, Lundstram and Aurier.

Alexander-Arnold is set to host Manchester United which will be a thrilling bout, for many reasons, yet we believe Liverpool should be more than capable of winning here. Furthermore, Alexander-Arnold has been just phenomenal recently, earning 6+ points for five consecutive rounds and there is no reason not to include him in our team or even transfer him out for another player.

Söyüncü has had a shaky performance last round when Leicester lost to Southampton, but we don’t feel like there is any reason to swap him out for another player just yet. Next game week Leicester will clash with Burnley, where they should see more success and while Söyüncü has only one goal to his name this season, we will hope he can cause some problems to Burnley’s poor defence. Lundstram and Sheffield Utd will clash with Arsenal in an away game, while Aurier is set to meet with Watford.

In our midfield, we have Dendoncker, De Buryne and Mane. Dendoncker has had a very solid GW22 when he scored a goal against Newcastle and while that was only his second goal of the season, he has shown immense improvement which is why we decided to give him a chance to prove his worth once more.

De Bruyne and Mane are two players who we have high expectations for. Mane is coming off a slightly underwhelming performance against Tottenham, where he earned only three points, yet there is a reason to believe he will see more success against Man United. The said match will be played at Anfield where Mane has scored a goal in his last two and we will count on him to continue his streak. De Bruyne has been solid throughout the season and has earned 25 points in his last three fixtures combined, and has an impressive average of 8.8 points in his last six. Man City’s next match will be against Crystal Palace who have failed to keep a clean sheet since GW16, meaning we can expect Guardiola’s men causing some serious damage in Palace’s goal. We have been contemplating whether to give De Bruyne the captain armband but instead decided for Vardy, which leads us to our final trio.

No changes in our attacking line, meaning we will once again field Ings, Abraham and Vardy. Last GW, the trio combined 21 points and we will hope that number to increase, which considering the opponents they will face is a realistic expectation.

Ings scored once against Leicester last round but ended the match with only five points. Nonetheless, we can expect him to see more success next GW, when Southampton lock horns with Wolves who failed to keep a clean sheet in their last seven fixtures. Furthermore, Ings scored at least once in nine out of his last 11 fixtures so there is no reason to believe he will walk away from GW23 empty-handed.

Abraham is coming off a six-point game against Burnley last week where he scored once to push his total goal tally to 13. The Chelsea’s striker has been averaging six points in his last three and while he has failed to reach double digits since GW15 when he scored a goal and added an assist against Aston Villa, we still believe it’s only a matter of time before he finds his stride and starts putting up better numbers. This weekend, Chelsea will meet with Newcastle who conceded 10 goals in the last four fixtures, meaning we can expect at least a goal from him.

Last but not least, we have Vardy, who will keep ahold of his captain armband. Last GW, Vardy failed to register a shot against Southampton’s revitalized defence, however, he has much more appeal for the next fixture, considering Leicester are set to lock horns with Burnley, who have conceded eight goals in their last four fixtures. If there is one match Vardy will shine it’s this one which is why we are putting all of our hopes in him to impress.

In our substitutions, we have got Pope, Grealish, Cantwell and Cathcart.

With that, we come to the end of our GW23 preview. We did not make any major changes to our team ahead of the next game week as we felt like no changes are needed. We have put a lot of hope in our strikers, who were slightly underwhelming last GW, but there is a reason to believe that will change here. Furthermore, both Mane and De Bruyne have solid fixtures ahead of them which we hope will result in some nice points. All in all, we will aim for 60 points, which we believe is a realistic expectation.