Round 21 of the English Premier League is behind us, meaning it’s time to look at how our fantasy team performed, how many points we earned, as well as at what went wrong and what went right. But, as always we will start the recap with the dream team i.e. the 11 players who earned the most points last gameweek. 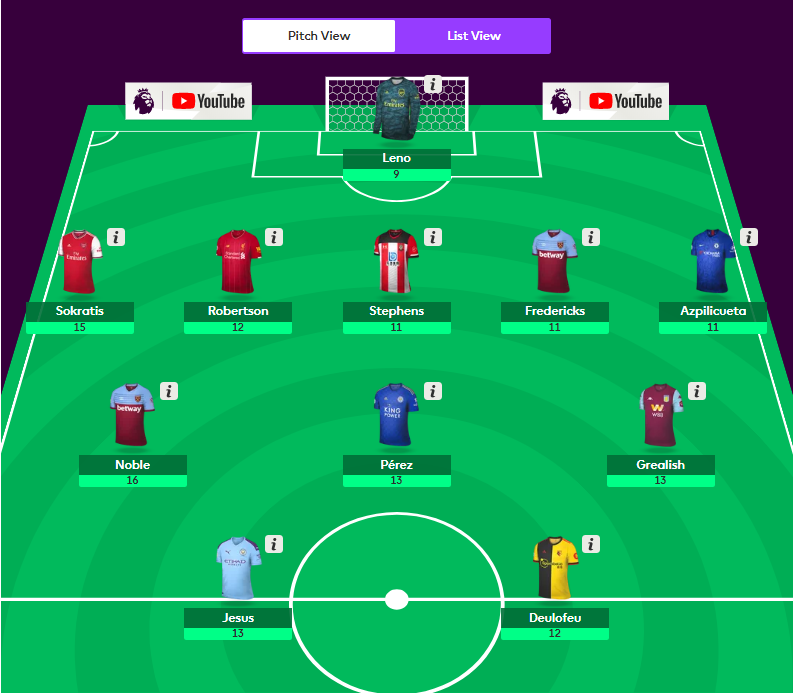 Bernd Leno (9) played extremely well for Arsenal last round where he helped the Gunners defeat Manchester United by keeping his goal untouched with four saves while adding two bonus points, earning him a grand total of nine points, which is his tied-best result of this season.

Sokratis ended the week with 15 points to his name with his phenomenal display against the Red Devils where he scored his second goal of the season and played a pivotal role in keeping his goal untouched. It marked his best performance of the season by a significant margin, as his previous best week came in round one where he earned eight points. Robertson helped Liverpool defeat Sheffield United with an assist and solid work in the back, which earned him an additional three points. He ended the week with 12 points, which was also his best performance of the season.

Stephens, Fredericks and Azpillcueta all ended this week with 11 points to their name. Stephens and Fredericks both helped their teams by keeping a clean sheet, and contributing an assist, while Azpillcueta scored his first goal of the season for Chelsea in their stalemate against Brighton. For all three mentioned defenders, GW21 was their best competitive week of the season, as they set their new season-high in points.

In the midfield, we have Noble (16), Perez (13) and Grealish (13). Noble helped West Ham earn a much-needed win against Bournemouth with two goals, which earned him 16 points – by far his best performance so far this season. Perez as well played a pivotal role in Leicester’s win over Newcastle with a goal, assist and solid display in the defence, which earned him 13 points. Grealish continued with his solid performances as he scored a goal and added an assist in Aston Villa’s win over Burnley. He also scored 13 points, which is his tied-best result of the week, having previously scored 13 points in GW8.

In the attack, we have Deulofeu (12) and Jesus (13), who both impressed with what they showed in the attack. Jesus scored twice in Man City’s win over Everton, while Deulofeu scored a goal and added an assist in Watford’s shock win over Wolverhampton.

In total the dream team of GW21 earned 136 points, which is 21 more compared to last week.

Now let’s take a look at how our team performed and how they compare to the dream team. 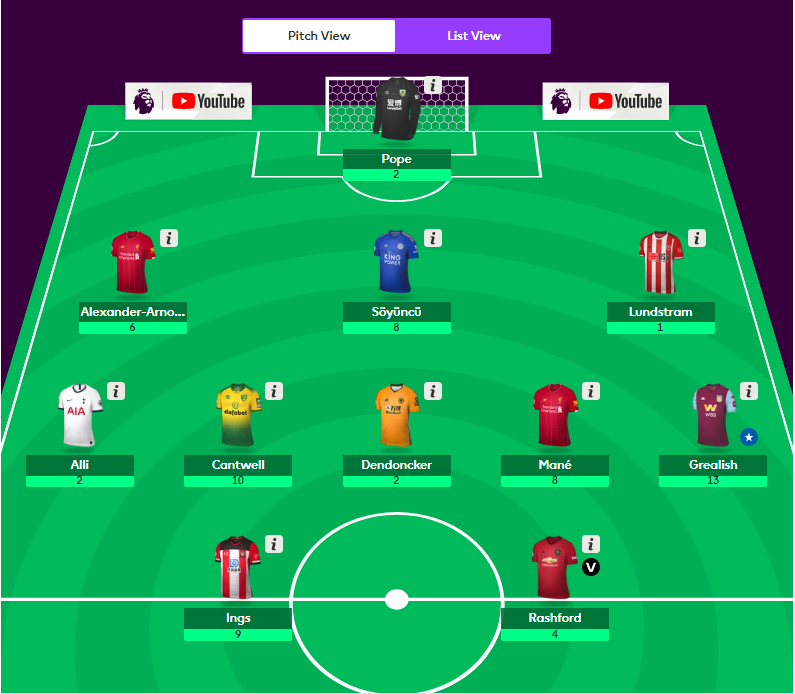 Pope (2) ended GW21 with only two points, having suffered a painful defeat against Aston Villa, where he conceded twice and made four saves. While not the result we were looking for, his replacement, Ryan ended the week with three points, meaning that either way we would not see any significant points from our goalkeepers. It was his third week in a row, where Pope failed to score more than three points.

Alexander-Arnold (6), Söyüncü (8) and Lundstram (1) combined 15 points, which is an ok result in our book. Alexander-Arnold was involved in Liverpool’s win over Sheffield United, where he did not contribute a goal nor an assist, yet still finished the week with solid points. Söyüncü on the other side failed to do any damage in the attack, but impressed with his performance in the defence, earning two bonus points which brought his total tally to eight, which was his best result since GW12. Last but not least, Lundstram lost to Liverpool and earned only one point. While nothing to be proud of, we did not expect too much from him either way as he faced a tough opponent. All in all, solid performance from our three defenders.

Alli (2), Cantwell (10), Denconcker (2), Mane (8) and Grealish (13) combined 35 points, which is an impressive result in our books. Alli and Denconcker failed to make much noise and earned only two points apiece, while the remaining midfielders put up solid displays.

All in all, our midfielders went above and beyond all expectations and we are overall satisfied with what they contributed to our team this week.

Vardy did not play last week, meaning we were left with only ings (9) and Rashford (4), who combined 13 points. Ings scored the only goal in Southampton’s clash with Tottenham, bringing his total goal tally to 13 points. He also earned three bonus points to end the week with nine points.

Rashford on the other side disappointed with his performance as he failed to find his way to the net against Arsenal. He finished the week with only two points, but because he was our captain he contributed four points to our team. Suffice to say, Rashford did not live up to our expectations this week and while he has a very favourable schedule ahead, we have serious reservations about whether to keep him in the team.

Our team combined 65 points in GW21, which is one point more compared to GW20 and fourth consecutive week when we managed to earn more than 60 points, which is a very solid result. While we had individual players who severely underperformed this week, their lack of contribution was more than compensated by the performance of other players, namely Grealish, Cantwell and Söyüncü. All in all, solid performance from our team and we will surely be looking to keep the streak going into GW22. 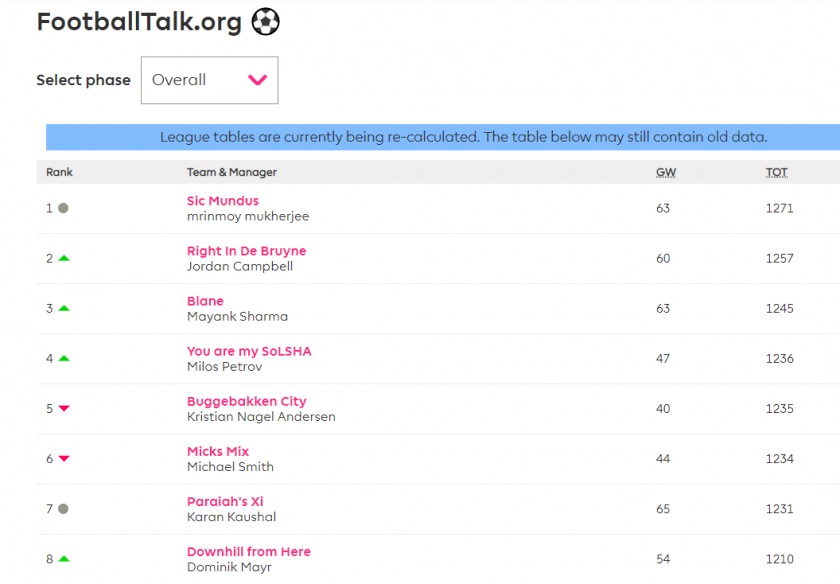 Sic Mundus stands at the top of our FPL with impressive 1271 points and his current overall rank is 11,246. Well done. We just started the second part of the season and there will be changes at the top for sure. Don’t forget that Liverpool will have a double 24 gameweek when they will play against Wolves and West Ham (both games away), so you should have three players from Liverpool for that round.

This weekend is reserved for FA Cup, so you will have enough time to prepare for the gameweek 22 next weekend.