EPL Fantasy Tips are ready for the Gameweek 24 of Premier League. Just as quickly as round 23 came to a close, we are already just a day away from round 24 of English Premier League, were we will see 10 exciting fixtures, between top English football clubs. Liverpool are set to play two games, after they missed out on GW18. Their match against West Ham is set to be played on January 29, three days before GW25, meaning the Reds will play two fixtures as a part of Fantasy GW24. Suffice to say, fielding Liverpool players can pay off big time, but what about other positions? Let’s take a look at how our fantasy team will look like heading into GW24. 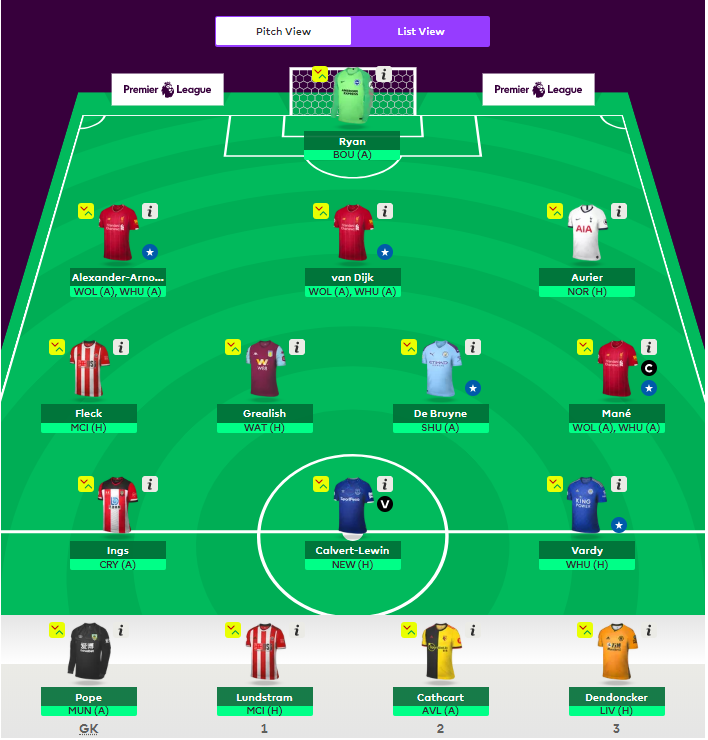 We had a tough task picking between Pope and Ryan for this game week. While Ryan is set to clash with Bournemouth in an away game, Pope will visit Man Utd. That said, Pope had an excellent game last round, while we can’t say the same for Ryan. That said, Man Utd are a deadly team while playing at Old Trafford, having scored eight goals in their last two home fixtures, and for that reason, we opted to not pick Pope and instead give Ryan another chance to prove himself.

We will field three defenders for this game week in Alexander-Arnold, van Dijk and Aurier. The Liverpool defenders had an impressive night last round when the duo contributed an assist and a goal for their team win which earned them 10 and 15 points respectively. Their next two fixtures will be against Wolverhampton and West Ham, which should be fairly easy games to win for Klopp’s men and there is no reason not to include them in our squad. Joining them will be Aurier, who is coming off a six-point week, which was his best score since GW16. Next round, Tottenham are set to meet with Norwich, who we don’t believe will cause them any major issues. Tottenham are a solid home team and we expect to see at least a clean sheet in the next round and another six points from Aurier.

For GW24, we will field four midfielders in Grealish, De Bruyne, Mane and our newest addition Fleck.

Grealish is set to lock horns with Watford next game week, which will be a very good match for Aston Villa to bounce back following their less-than-impressive results in the last two rounds. Grealish has scored a goal last round against Brighton, which was his seventh goal of the season and second in the last three EPL fixtures. We have high hopes for him to continue his solid form and there is no reason to believe he won’t be able to produce some nice points this game week.

De Bruyne and Mane have had a very iffy performance in the last round, where they failed to produce any notable points. That said, there is no reason to replace either of them. Man City will meet with Sheffield Utd next round which should be a fairly easy game to win. While they might concede a goal due to their shaky form, we are confident saying the Sky Blues will net a few themselves as well. We expect at least a goal or an assist from De Bruyne and nothing less. Mane on the other side is a no-brainer pick for GW24. While he has had an iffy performance in the last two weeks, he is still a threat to any team Liverpool face. The fact that the Reds will play two very favourable games next week against Wolves and West Ham, makes picking Mane an obvious decision. He will also be our captain for this week.

We have made one change in our attacking line-up, by selling Abragam and bringing in Calvert-Lewin. The Everton striker is coming off an eight-point game against West Ham where he scored his ninth goal of the season. His next fixture will be against Newcastle who have not been too solid in recent weeks. It’s also worth noting that Everton already bested Newcastle in GW20 when Calvert-Lewin scored twice and we will hope he can repeat his success and score a couple here as well.

Joining Calvert-Lewin we have Ings and Vardy. Neither managed to impress last round, however, we have decided to keep them in the team as they are facing some favourable opponents next game week. Leicester are set to clash with West Ham, while Southampton will meet with Crystal Palace. Whether the duo will manage to impress is anyone’s guess, but we will take our chances with them.

In our substitutions, we have got Pope, Lundstram, Dendoncker and Cathcart.

With that, we have come to the end of our GW24 preview. We took the loss of four points in order to sign van Dijk and Fleck to our team, however, seeing how Liverpool are set to play two fixtures, we are more than confident we will get those four points back with relative ease. Suffice to say we have high expectations for our Liverpool trio, who will play a crucial role in our team’s success this GW. Other than that, we hope Vardy and Ings can find their form and contribute some points, unlike last week when they combined two points.