Another weekend is closing in, meaning it’s time for EPL Fantasy Tips and the 26th installment of our English Premier League Fantasy game week preview, where we look over our team, what have we changed and what are our plans for the upcoming round of EPL. 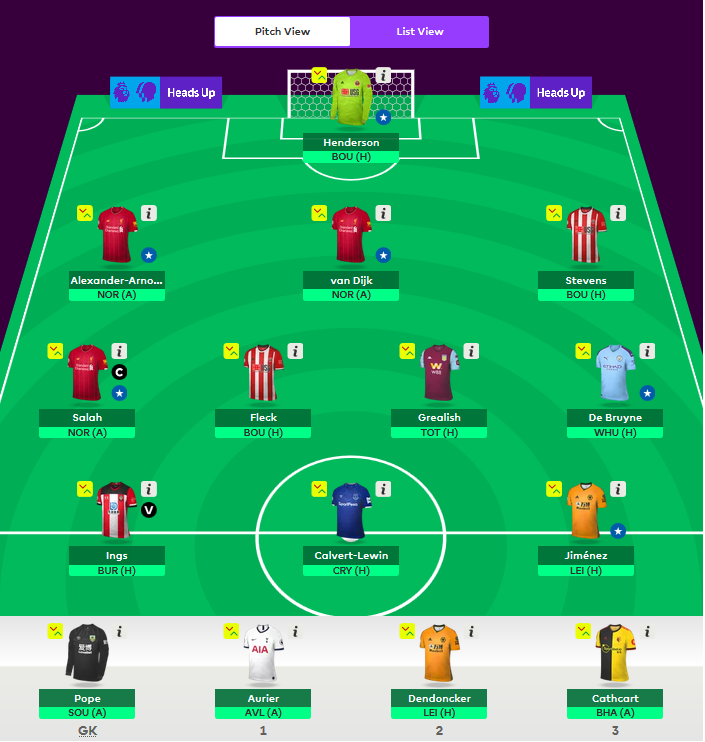 Representing our team in GW26 will be the newest arrival Dean Henderson, who will replace Ryan for fairly obvious reasons. Henderson has been performing exceptionally well for Sheffield Utd so far, pocketing nine clean sheets and 111 points this season and we will hope he can continue putting up double-digit points for weeks to come. Sheffield Utd’s next fixture will be against Bournemouth, followed by a clash with Brighton, Norwich and Newcastle, meaning Henderson also has a very favourable schedule ahead.

We have decided to field the same three defenders as last round in – Alexander-Arnold, van Dijk and Stevens. The trio put up a solid performance in GW25 and we are confident they can repeat their success in GW26. Van Dijk and Alexander-Arnold are set to clash with Norwich, while Stevens will lock horns with Bournemouth. All three players have very favourable fixtures ahead, especially considering that the Cherries scored only one goal in their last five away games, while five out of Blade’s nine clean sheets this season came at Bramall Lane.

Norwich on the other side, are suffering from some defensive issues, and tend to concede more at Carrow Road, which makes picking van Dijk and Alexander-Arnold a no-brainer.

Four midfielders in our team for GW26 in Salah, Fleck, Grealish and De Bruyne.

Salah has been just phenomenal last week and with Mane still injured, he will play a pivotal role in Liverpool’s success. Picking him, is just like it was the case with van Dijk and Alexander-Arnold a no-brainer, as he should cause some serious damage to Norwich. Salah will also be our captain for this week.

Joining him we have Fleck, who will meet with Bournemouth next week. In his last two fixtures, Fleck earned only three points combined, yet there is a reason to believe he will be able to put up a better show this week. Grealish has a tough match ahead of him, as Aston Villa faces off with Tottenham. Nonetheless, Tottenham have not been too solid lately and with their inconsistencies, we would not be shocked if Aston Villa can make some noise. Grealish has scored seven goals so far this season and added six assists. Although he is without a goal or assists in his last two, we have a reason to believe he will earn us some nice points this week.

Last but not least, we have De Bruyne, who had an underwhelming GW25 against Tottenham, however, with West Ham United as Man City’s next opponents, we simply have to pick him. We expect him to cause some serious damage to West Ham on the Ethiad Stadium or at least book an assist or two.

Three strikers in our team for this week in Ings, Calvert–Lewin and Jimenez.

Ings is set to meet with Burnley where he will hope for better results compared to those he was putting up in recent weeks. He is, however, still inside the division’s top-six for shots inside the box over the last four matches, which alone makes him a very solid pick for this week. Joining him, we have Calvert-Lewin, who will fancy his chances against the Eagles, who are without a clean sheet in nine gameweeks. While the Everton’s striker failed to score in GW25 against Watford, he is still holding onto 10 goals this season and has five goals in his last seven fixtures

Jimenez will round up our team as our third striker. Playing against Leicester, Wolverhampton and Jimenez might not have the easiest time, however, we can’t forget he has 11 goals so far this season, three of which in his last three fixtures. Furthermore, he has scored against Liverpool and Man City already this season, which makes us believe he will be able to do something against Leicester as well. What’s more is that Leicester are prone to conceding at least one goal- especially in away games, which makes Jimenez an excellent pick to contribute some points for our team this GW.

In our substitutions, we have got Pope, Aurier, Dendoncker and Cathcart.

And with that, we have come to the end of our EPL GW26 preview. Besides the change in the goalkeeper, we have kept our team intact, as we did not see any reason to change anything up. We might look into shuffling up the team later, but for now, we are happy with what he have. Most of our team’s success will rely on Liverpool’s players as well as our attacking trio who can prove to be a hit-or-miss pick. Nonetheless, we seem to be set for another 60+ point week should there be no surprises.