We are back with another English Premier League fantasy tips and preview, where we will look at the 25th round of EPL, and reveal the 11 players who will represent our team heading into this competitive week in a bid to return to our old ways and start earning 60+ points per week. Whether we will achieve our goals is yet to be seen, but we have a good feeling about what our squad can achieve. So without further ado, let’s jump into our EPL GW25 preview. 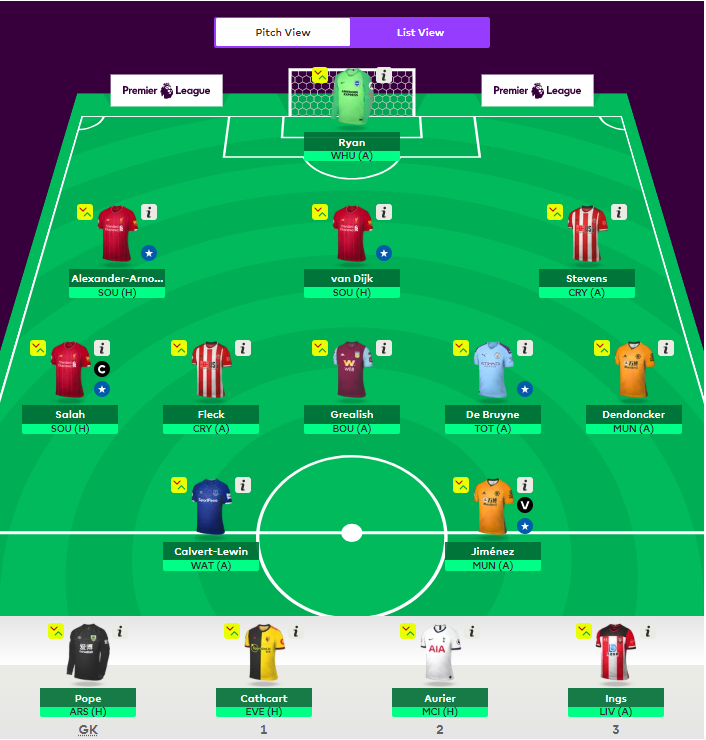 Choosing our goalkeeper was not an easy task partially because Ryan has not been too solid lately and Pope is facing the aggressive Arsenal, who have a very strong record against Burnley. Arsenal defeated Burnley in all of their last five meetings, dating back to 2017 with a 14:3 aggregate score. With that in mind, we have decided to field Ryan once more and give him one more chance to prove himself before we start looking for a transfer. Dubravka and Guiata both look like solid replacements, but we have decided to not use our transfer on goalkeeper just yet.

With Lundstram’s place in some doubt due to recent developments, we have decided to transfer him out in favour of his teammate Enda Stevens, who has been playing solid in recent weeks and should earn us some nice points, namely because the fixtures at Selhurst Park has seen fewer goals than any other ground this season meaning we can expect a clean sheet for Sheffield Utd this round.

Joining him, we will have Alexander-Arnold and van Dijk. Both have been playing great football recently and we expect some great things next week as Liverpool clashes with Southampton.

We have decided to field five midfielders for this gameweek. Due to Mane’s injury, we have replaced him with Salah, who will also be our captain for this week, as he has a very favourable fixture against Southampton, making him a particularly strong captaincy pick, especially with Mane likely out of the game.

Next to Salah, we have Fleck, Grealish, De Bruyne and Denconcker. Fleck will play against Crystal Palace in what we expect to be a low scoring match, yet with defensive holes in Palace’s defence, we can hope for Sheffield Utd to do some damage. Grealish has been playing great in recent weeks and we expect him to do some damage this week as Aston Villa meets with Bournemouth. If he can continue his form, we would not be surprised if he brings some points to our team, seeing how he registered three attacking returns in the last two away matches. De Bruyne needs no special introduction, while we will count on Dendoncker to deliver against Manchester United, who have not been too solid lately and are bound to struggle against Wolverhampton, despite the fact Red Devils bested them in FA Cup earlier this month.

We have decided to sell Vardy for this week, which did cost us eight points, yet it was a solid investment to bring in Jimenez as his replacement. Making three changes is rarely a good choice, but in this case, we have secured Salah, Jimenez and Stevens, who all have favourable matches this week and in later game weeks, which is why we took a chance with this transfer.

Jimenez has scored three goals in his last two fixtures and is currently on 11 goals on the year. He will play a pivotal role in Wolves’ match against United and while Wolves already lost to the Red Devils a couple of weeks ago, Jimenez seems set to score at least a goal, considering he managed to do so against Liverpool last week. Standing next to him, we have Calvert-Lewin who has scored in the last two weeks against West Ham United and Newcastle. This week he will play against Watford. While he is the biggest question of our team, we have decided to field DCL over Ings, solely because Ings is playing against Liverpool, where he will surely have a hard time scoring a goal – something he failed to do in the last two weeks.

In our substitutions, we have got Pope, Cathcart, Aurier and Ings.

And we have come to the end of our EPL GW25 preview. Our team failed to deliver last week, yet we have confidence this week will be different. We are putting a lot of hope into Salah to deliver and justify his captaincy, while Wolves have to step up and defeat Man United for us to earn some nice points. We will mostly look at the performance of Jimenez and hope for Dendoncker to make some noise as well. As for our defence, we would be disappointed if we see anything less than double digits from our trio, who all have very favourable fixtures ahead. All in all, a very promising week and one which should earn us some great points.