Everything is set for round 22 of English Premier League to kick off this Friday, January 10, with a clash between Sheffield Utd and West Ham, followed by nine more bouts, where we will see some of the best English teams compete in the second fixture of 2020. There are plenty of existing fixtures on the schedule for GW22, some of which provide us with a great opportunity to earn a nice sum of points. Now let’s take a look at which players we will field for the next round. 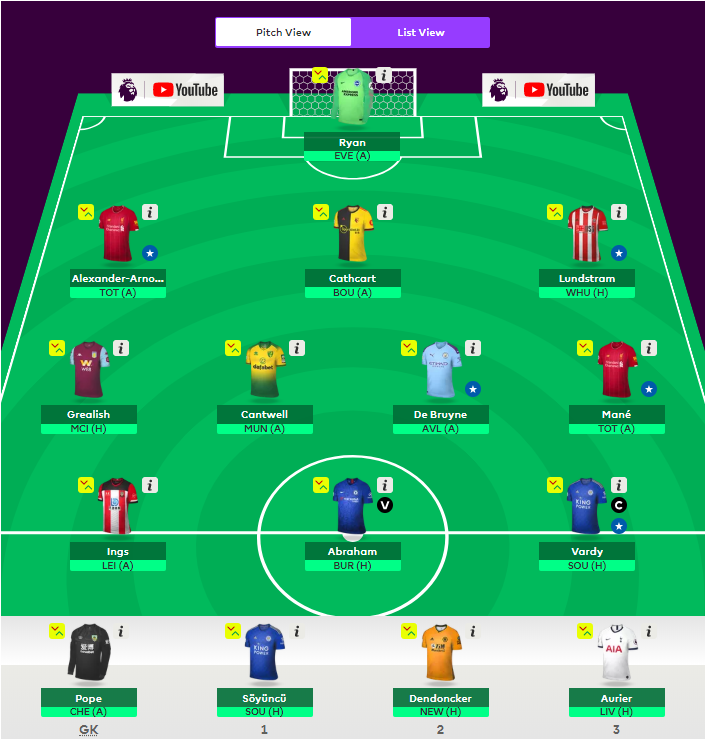 For the next EPL round, we will field Ryan as our goalkeeper instead of Pope. The decision behind that is quite simple, considering Pope is facing off with Chelsea, while Ryan has a meeting with Everton on the schedule. Furthermore, Ryan has been playing well in recent weeks, and while he has conceded a goal last GW against Chelsea, he has five clean sheets to his name this season and we are confident he can make it six this round. Pope and Burnley on the other side conceded five goals in their last five, which fails to inspire much hope they can deliver here and defeat Chelsea.

For GW22, we will field Alexander-Arnold, Cathcart and Lundstram as our three defenders.

Liverpool have a very important match ahead of them, as they face off against Tottenham, which should bring out the best of their players. While it will be by no means an easy match, Tottenham have been visibly struggling in recent weeks, especially in the defence, which leaves us with a great opportunity to see Alexander-Arnold contribute something on the other side of the field as well.

Cathcart has had great returns in recent weeks, with eight points against Aston Villa in GW20, while he only saw two points last GW against Wolverhampton. Next week, Watford will meet with Bournemouth, which should give them a great opportunity to make something happen and we can trust Cathcart to deliver once more. Last but not least, we have Lundstram, who has earned only one point last week against Liverpool and no points against Manchester City a week prior. That being said, Sheffield Utd are set to meet with Newcastle next week, which is a significantly easier match for them. Newcastle have been struggling with their offence as of late and for that reason, we are counting on Lundstram to deliver and prove once more why he is in the dream team of 2019/20.

Grealish, Cantwell, De Bruyne and Mane are our four midfielders for GW22. Grealish has been playing very well in recent weeks and is coming into GW22 after an impressive 13 points game against Burnley. While Aston Villa are set to face a tough opponent in Manchester City, we were very reluctant to bench Grealish, due to his impressive contribution to the team. Cantwell is another player who can deliver if given a chance, and while we were close to letting him go, our decision to keep him in the team for a little longer paid off. Last week he earned 10 points against Crystal Palace with a goal, suggesting he is in great shape and will be looking to do some damage against Man Utd this weekend. Expecting Norwich to win here might be a bit far-fetched, but considering how poorly the Red Devils player recently, we would not exclude seeing Norwich cause some damage.

De Bruyne is our third midfielder and our new arrival, who will serve as a replacement for Alli. There is not a lot to be said about De Bruyne which has not already been said. He is performing well and has been very consistently among the best players in the league. Furthermore, Man City have some very favourable matches ahead, so singing him instead of Alli was a no-brainer for us.

Mane is our fourth midfielder, how just like De Buryne needs no special introduction. He has been consistently delivering solid numbers and it’s rather obvious he will stay in our team.

Ings, Vardy and our new arrival Abraham will represent our team this GW. Ings, much like Mane and De Bruyne has been a very solid player throughout the season and should be more than capable of causing some damage in the remaining rounds. He has scored four goals in his last four, including one against Tottenham last round. His next match will be against Leicester, who can be quite deadly in the attack, yet it’s their defence, which has not been to solid. We expect at least a goal from Ings, and that is in our eyes a fair expectation.

Vardy has not played in the last two weeks, yet he is expected to return to the pitch for GW22, where we can assume he will do some damage as well. He has scored 17 goals this season already and there is no reason to believe he won’t be able to continue scoring more goals. He will also wear the captain armband for this week.

Last but not least, we have re-added Abraham to our team. He has previously put up solid results for us, yet suffered an injury, which forced us to swap him out. Last week, he failed to score a goal against Brighton, which was slightly underwhelming, however, with a fixture with Burnley on the schedule for the Blues, it’s easy to expect some nice points from him.

In our substitutions, we have got Pope, Söyüncü, Dendoncker and Aurier.

With that, we come to the end of our Fantasy GW22 preview. All in all, we like the look of our team throughout, with very favourable fixtures for our strikers and a very deadly midfield, which we expect will earn us some great points. There is a slight concern whether Grealish and Cantwell will be able to deliver, but if their previous performances are to go by, we might be impressed and see some double-digit points from either of them. As we see it, another 60+ point week is entirely possible, which is exactly what we will be aiming to achieve.