We are back again with our English Premier League Fantasy recap, where we look over our team, how it performed, as well as where did we go right and were did we make mistakes. But as always, we will start our EPL Fantasy recap with the dream team of the week. 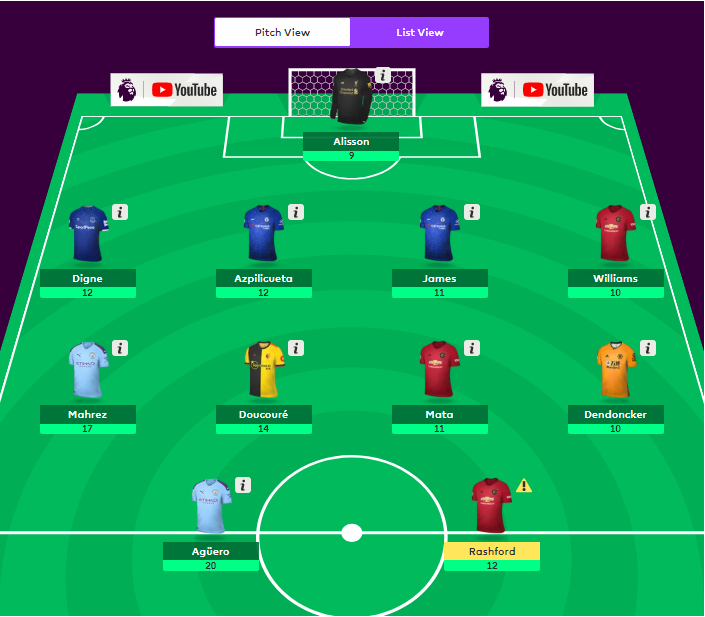 Alisson Ramses Becker (9) ended the game week with nine points, making him the most efficient goalkeeper of the 22nd round. It marked his season-best performance as he helped Liverpool defeat Tottenham 1:0. Alisson made four saves, earned two bonus points and finished the game with his sixth clean sheet of the season.

Despite Red’s impressive performance against the Spurs, there are no Liverpool defenders in the dream team. Instead, we welcome Digne (12), Azpilicueta (12), James (11) and Williams (10), who all put up very solid performances this round.

Digne Helped Everton defeat Brighton by keeping a clean sheet and adding an assist, which earned him season-high 12 points. Azpilicueta put up the identical performance against Burnley, where he helped Chelsea keep a clean sheet and contributed an assist. Azpilicueta also earned three bonus points, thus ended the round with double-digits for the second week in a row. His teammate James also contributed an assist but earned only two bonus points, thus ended the round with 11 points, which was by far his best performance of 2019/20 season. Last but not least, Williams earned 10 points in Man Utd’s match against Norwich, There he earned one bonus point, helped with keeping a clean sheet and contributed his first assists of the season, which was also his best performance of the season. This match was also Williams’ only fourth fixture where he started for the Red Devils, which suggests we might be seeing more of him in the future.

Mahrez was simply impressive last round, when he scored two goals and added an assist in Man City’s win over Aston Villa, which earned him 17 points, two points above his best result, which came in round 6. While his solid performance might not come off as a shock to many, the performances of Doucoure and Denconcker should. Doucoure scored a goal and added an assist in Watford’s win over Bournemouth, while Denconcker came out of the blue to score a goal for Wolves in their stalemate against Newcastle. Mata on the other side also had a very solid showing last round, where he contributed two assists in Man Utd’s win over Norwich, thus earned 11 points – which is by far his highest point tally of the season.

Dreamteam of GW22 featured two strikers – Aguero (20) and Rashford (12), who both played a major role in their team’s success. Aguero made a return to the City’s lineup after not playing for the whole 90 minutes since round 11 and scored three goals to which he added an assist, thus ended the week with 20 points. Rashford on the other side scored twice against Norwich, thus earned 12 points, which is his best performance since round 15 when he saw the same success against Tottenham.

In total the dream team of GW22 earned 138 points, which is two more compared to last week.

Now for our fantasy team. 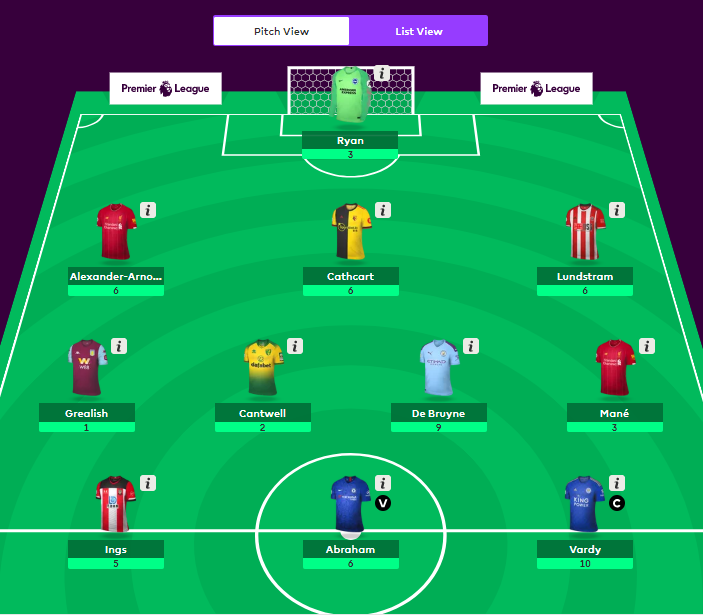 Our goalkeeper Ryan (3) ended GW22 with three points to his name, which was not too impressive, yet it was slightly better to what Pope produced (2 points), so it’s safe to say we at least picked the best option out of the two.

Our three defenders Alexander–Arnold (6), Cathcart (6) and Lundstram (6) finished the week with 18 points combined, having all earned six in last game week. Neither of them managed to score a goal not did they contribute an assist to their team, however, all three ended the week with a clean sheet. While we did hope for slightly more points from our defenders, it was still a very solid outcome in our books, considering neither of them had a very easy fixture to play.

Our quartet of midfielders – Grealish (1), Cantwell (2), De Bruyne (9) and Mane (3) combined 15 points, which was far below what we expected. Grealish had an off night against Man City, as he failed to make any notable contributions to Aston Villa and finished the night with only one point. Cantwell was in a similar position with Norwich, as he failed to relive his success from GW21 and ended the week with only two points to his name. Mane had a slightly better night, yet he still only earned three points against Tottenham, seeing how he failed to score a goal or produce an assist. That being said, at least our new addition – De Bruyne put up two assists to end GW22 with nine points.

Ings (5), Abraham (6) and Vardy (10) earned us a combined 21 points, which, all things considered, was a solid outcome, despite the fact we were hoping to see a couple more points.

Ings ended GW22 with one goal to his name, which he scored against Leicester and helped Southampton earn an important win. It marked his 14th goal of the season and the third fixture in a row where he scored a goal. Abraham saw the same success against Burnley, where he scored his 13th goal of the season, which was a solid outcome considering he scored only two goals in the last seven rounds. We were, however, expecting more from him, however, six points are still decent. Vardy, as our last striker failed to score against Southampton, however, managed to produce an assist, which earned him five points. Because he was our captain, however, he ended the week with 10 points to his name.

Our team combined 57 points in GW22, which is eight less compared to last week and it marked the first time since GW17 that we failed to pass 60 points. Nonetheless, it was still a solid outcome, as we did manage to at least reach GW22 average in points. We were slightly disappointed not to give Denconcker a chance, considering he ended GW22 with 10 points, however, as they say, there is no use crying over spilled milk. 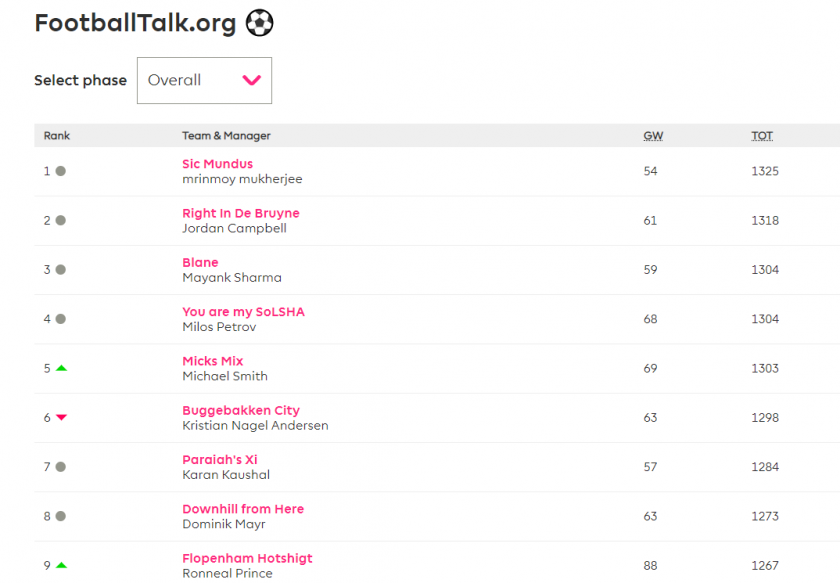 Sic Mundus is still on the top of our FPL with 1325 points, while behind him is Jordan Campbell with 7 points less. Flopenham Hotshigt has made 88 points in the GW 22 and moved into the top 10. He made WC and captained Aguero who produced hat-trick and earned 20 points.

In the GW 24, Liverpool will have double round since they missed the game against West Ham, so in that round, The Reds will have two matches, both away, against Wolves and West Ham. You should think about transfers now and try to have three of Liverpool’s players.