Julian Nagelsmann’s side get a fully deserved win as it turns out to be a historic day for the German club. 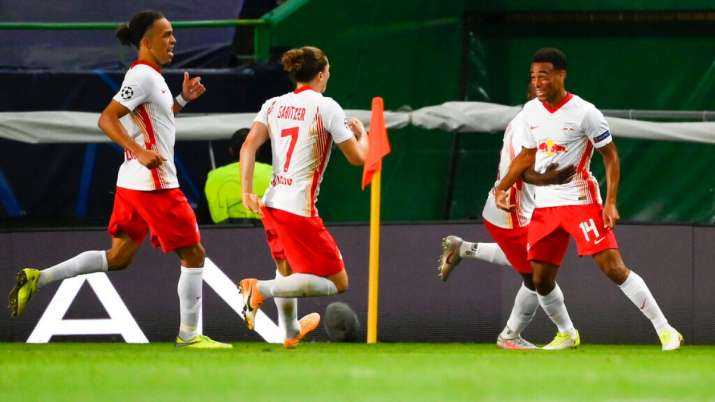 Before the game, Atletico Madrid were the favourites for the game largely based on the fact that they were more experienced and they have better quality players. In his press conference, Julain Nagelsmann said that since the tie is single leg competition Atletico’s experience won’t be of great help to them.

He also said that players who haven’t played in Werner’s absence will step and indeed they did. Though Atletico’s experience did come in handy RB Leipzig did not shy away from taking the game to the Los Colchoneros as they kept on creating chances.

Atletico were far from their best as they looked unorganised and out of energy compared to RB Leipzig. It is also the club’s first-ever victory in the quarter-final stage of the competition. Diego Simone would definitely be disappointed with his team, as it was far from a classic Atletico performance. They never really defended very tight and rigid; they also lacked the desire and hunger to win the game.

Diego Costa was largely anonymous as Dayot Upamecano completely pocketed him. Both the managers made substitutions and the substitutes for both the teams made an impact but ultimately Julian Nagelsmann had the last laugh.

RB Leipzig were very lively in the early parts of the game and they did create some chances. Though they lacked quality in the final third and Jan Oblak was hardly troubled. While Atletico Madrid relied upon set pieces to threaten Péter Gulácsi goal. They came close but they could never really manage to get the timing of the headers right.

For Atletico apart from set-piece opportunities, Yannick Carrasco had one chance after Renan Lodi squared a ball to him on the left-wing. The Belgian also managed to get his shot away but Gulácsi was alert and diverted it for a corner. Saul Nigez also had a case for a potential penalty but there was nothing cynical in that as VAR checked it for 15 minutes and no penalty was awarded to them. RB Leipzig’s best chance came to Dayot Upamecano form a corner.

The Frenchman headed the ball cleanly but it was straight to Jan Oblak who collected it calmly. Leipzig’s inexperience was a bit evident in the first half but so was their determination as Atletico struggled to dominate the Germans. Overall the first half dull and the audience was waiting for some decisive action in this knockout game as the first half finished 0-0.

The game was sparked back into life in the 50th minute. Die Roten Bullen played some smooth football around Atletico’s box on the left-hand side. This created space on the right for Marcel Sabitzer who swang in a good cross which was met by Dani Olmo’s head. The Spaniard was not marked by Atletico’s defenders and it was a brilliant pick by Sabitzer. Olmo just guided the ball in the right-hand corner by using the pace on the cross from Sabitzer against a helpless Oblak.

The Germans were now leading by a goal to nil, after that goal, they sat off as Los Colchoneros decided to take the matter into their own hands. Diego Simone introduced his record signing Joao Felix and the former Benfica forward made an instant impact.

Despite being down by one goal Atletico did not panic which was a testament to their experience. With Felix on the ball, Atletico looked more convincing and dangerous. In the 60th minute, they thought they had a penalty after Lodi fell on the ground but the referee was not tricked by the Brazilian’s attempt to get a penalty instead he was booked for diving. Felix continued to threaten Leipzig’s goal and finally, in the 69th minute, he was fouled inside the box by Klostermann. The Portuguese stepped up to take the penalty and equalised for the Spanish side.

However, in the 87th minute, Angelino found himself in space on the left-wing and his low pass found substitute Tyler Adams. The American wasted no time as Atletico were not quick to close him down, Adams shot was deflected which sent Oblak the wrong way and ball was inside the net. Los Colchoneros did try to score a late equaliser but Leipzig were having none of it to preserve their hard-earned lead. The game finished 2-1 as Leipzig reach the semi-finals of the Champions League for the first time in their history.