If day one of UEFA Champions League 1/8-finals was exciting, it’s hard to find the right words to describe day two, which presented us with one of the biggest shock results of 2019/20 football season, which saw Atletico Madrid join PSG, Atalanta and RB Leipzig as one of the four teams who earned themselves an early spot in the quarter-final stage.

PSG welcomed Borussia Dortmund at Parc des Princes in the capital of France, where the hosts were chasing a one-goal deficit they produced in the first leg in Germany. Although the French champions lost the first meeting with Borussia, they looked very strong at Signal Iduna Park, where they were a bit unlucky with their shots, namely Neymar who saw his attempts bounce off the crossbar twice.

Entering the second leg, Neymar did his best to fix the errors from the first bout and scored the game opener in the 28th minute thanks to a well-executed corner pass from Di Maria, which found the Brazilian star alone in front of helpless Burki. One goal up, PSG already secured a spot in the next stage, but they were not ready to slow down just yet.

The French juggernauts kept pushing for another goal and managed to squeeze one in right before the halftime with a well-executed counterattack and accurate shot from Bernat who got his team in a two-goal lead.

Borussia woke up in the second half and started pushing for an equalizer. With 58% ball possession and eight-goal attempts, the Germans proved to be far more dangerous, yet all their attempts fell through, as they did not produce a single shot on goal throughout the whole 45 minutes. As time passed, Borrusia became more and more anxious and the strong defence from the French outfit further frustrated Favre’s men.

The Swiss mastermind opted to swap in Brandt, Reyna and Gotze, hoping to turn the game around, but to no avail. The match ended with quite a few incidents, as Emre Can earned himself a red card in 89th minute due to unsportsmanlike conduct, while Neymar, Marquinhos and Di Maria all getting shown a yellow card.

The match ended without any surprises in the final minutes of the match, meaning PSG successfully overcame the two-goal deficit with a solid strategy of getting an early lead and defending their net for the rest of the match.

While PSG decimated their German adversaries on the home soil, Atletico Madrid showed even gods can bleed, as they eliminated the reigning UCL champions, Liverpool with an impressive performance in the overtime. And all that in front of Liverpool’s fans at Anfield stadium. 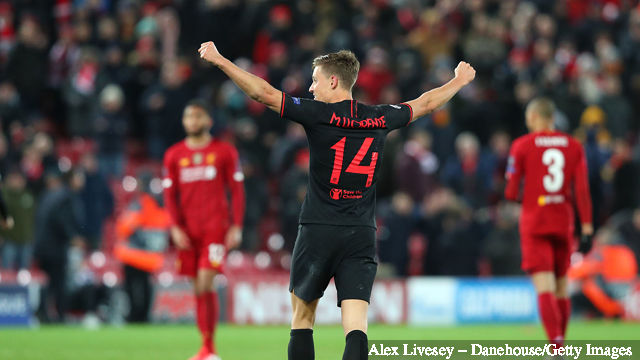 The first leg between Liverpool and Atletico Madrid was played back in mid-February in Spain, where Atletico Madrid managed to edge out a win with a 4th-minute goal, courtesy of Saul. In Spain, Liverpool failed to show the quality you would expect from a UCL champion, considering they produced an underwhelming number of goal attempts (7), while also failed to muster up a single shot on goal.

Although a worrying result, Klopp promised his fans that Liverpool will look stronger and will be better prepared for the reverse leg, and while the Red might have looked stronger as they did in Spain, they still did not produce enough to come out ahead and earn themselves a ticket for the quarter-finals.

The match between Liverpool and Atletico Madrid began with the hosts completely dominating their opponents and it all seemed like they would stomp the Spanish squad by the end of the night. In the first half, Liverpool produced 12 goal attempts and five shots on goal, with 63% ball possession, yet they only managed to score once, which allowed them to equalize the aggregate score and set themselves for success.

Unfortunately, success was nowhere to be seen. In the second half, Liverpool were once more holding the reins of the match in their hands with 65% ball possession, 15 goal attempts and six shots on goal, as opposed to Atl. Madrid who shot the ball 3/5 with 35% ball possession. Despite significantly better numbers, Liverpool simply couldn’t find a way to the opponent’s net. After countless failed attempts, the referee blew his whistle and it was time for overtime.

Determined to seal the deal and make their fans proud, Liverpool got off to a flying start in the overtime and with the help of Firmino got themselves in a 2-0 lead in 94th minute. Their enthusiasm, however, did not last for long, as Reds conceded a goal only three minutes later when the young star Joao Felix took full advantage of Adrian’s mistake and passed the ball to Llorente who took his opportunity to score a goal.

Atletico Madrid, however, were not done just yet. In 105’+1, Llorente scored another one to hand Liverpool a massive blow to their chances of advancing. Fabinho and Origi came on the pitch for Liverpool in the final 15 minutes of the overtime in a bid to help their side turn the game around, but Reds ran out of time to do so. Instead, it was Morata who hit the final nail in Liverpool’s coffin in 120’+1 which saw Atletico Madrid head to the locker room with a 2-3 win and an impressive 2-4 aggregate score.

Day two of UEFA Champions League 1/8-finals truly was an exceptional day for football and in many aspects a shocking one. While seeing PSG advance is nothing unusual, no one could have expected Atletico Madrid, who have been struggling with their results in LaLiga, would manage to defeat Liverpool, who until recently held to an unbeaten record in the English Premier League. It only goes to show anything can happen in the football world and we can only guess what awaits us in the remaining rounds of UCL.

With that, RB Leipzig, Atalanta, Paris Saint-Germain and Atletico Madrid are the first four teams to secure a spot in the quarter-finals, with four more teams set to advance into the next stage after they finish their fixtures on March 17 and 18.