Rashford and Phil Foden decided for England in another great performance by Gareth Southgate’s team. 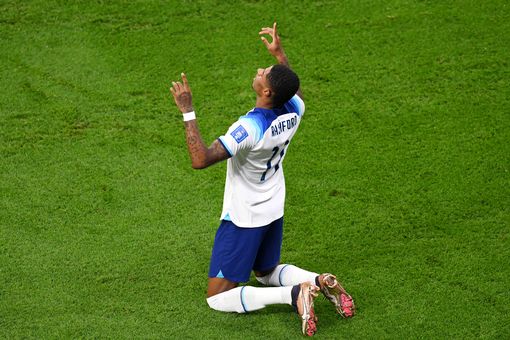 England confirmed its favouritism against Wales and won the British clash 3-0 in the closing of Group B.

Wales had Joe Allen starting for the first time in this World Cup. With that, there was a change to a four-man lineup, with Neco Williams at right-back and Davies at left-back.

A team lined up with Ramsey, Daniel James, Bale and Kieffer Moore in the starting lineup indicated an offensive Wales to seek a place in the round of 16.

On the other hand, England also saw changes with Kyle Walker debuting at the World Cup at right-back, keeping the line of four behind. In midfield, Henderson played alongside Rice and Bellingham.

In the first half, the English were responsible for the wide control of ball possession due to the defensive strategy of the Welsh. Even with several alternatives in the attack and the need for victory, Wales opted for (unsuccessful) counterattack attempts.

Meanwhile, England also did not collaborate for a good first half with misplaced passes in the final third and a lack of better offensive creation. Without the ball, marking in the middle block also prevented opposing chances.

After the break, manager Gareth Southgate stepped up the lines and imposed greater intensity against Wales, putting pressure on the opponent from the first minute. The strategy worked and resulted in a great goal by Rashford, in a perfect free kick, to open the scoring.

Phil Foden took advantage of the error on the way out in the next minute and sent the English victory through great collective construction. Finally, Rashford scored his second goal and secured first place in Group B for England.

English fans contest Southgate sometimes, but the work done by the manager qualifies the English as a possible title contender.

The main novelty in the lineup for the United States was the return of Josh Sargent in the attack. In addition, Carter-Vickers played alongside Tim Ream as halfback.

On the other hand, the selection of Iran had only one change in relation to the second round with the return of goalkeeper Beiranvand. In the rest, Carlos Queiroz repeated the lineup of the second fixture.

Iran’s selection also sought counterattacks to try to combat the technical superiority of the United States. Even with an advantage in finishing, the USA could not find good dangerous plays.

Iran failed to finish on target for the entire first half. On the other side, the United States overcame the opposing defensive system in the final third with a beautiful goal by Christian Pulisic, taking advantage of a precise cross by Sergiño Dest.

In the second half, the US team showed greater physical exhaustion and Iran tried to grow with better possession of the ball, more passes and a lot of confidence. The Iranians tried until the end, but the US managed to hold back the enemy’s offensive momentum.

Despite a squad with fewer technical resources than the favourites for the World Cup title, the young US team showed good quality in the face of enormous potential, overcoming the distrust of the matches that preceded the start of the Cup.