The 2022 World Cup is underway in Qatar. As the knockout rounds continue, we have seen mighty shocks, unexpected upsets, and some new contenders emerge out of nowhere—but there is still a long way to go in the tournament before the champions are crowned.

Along the way, the whole world has witnessed most matches impacted in at least some capacity by VAR technology. Interestingly, VAR at the World Cup has an added feature, the semi-automatic offside technology (SAOT), which has helped improve decisions and can also quickly rule out goals scored from an offside position.

Like every World Cup edition, Qatar 2022 has had its fair share of controversies, with poor refereeing decisions and vague VAR calls being the root cause for many. Ahead of the semi-final matches, we look at five controversies that unfolded because of the VAR.

Japan’s mighty 2-1 win in the group stages wasn’t devoid of controversy. Their second goal caused a storm on social media, as not only did the South Asian team pull off a massive shocking win against Spain but also, in doing so, eliminated Germany from the World Cup. 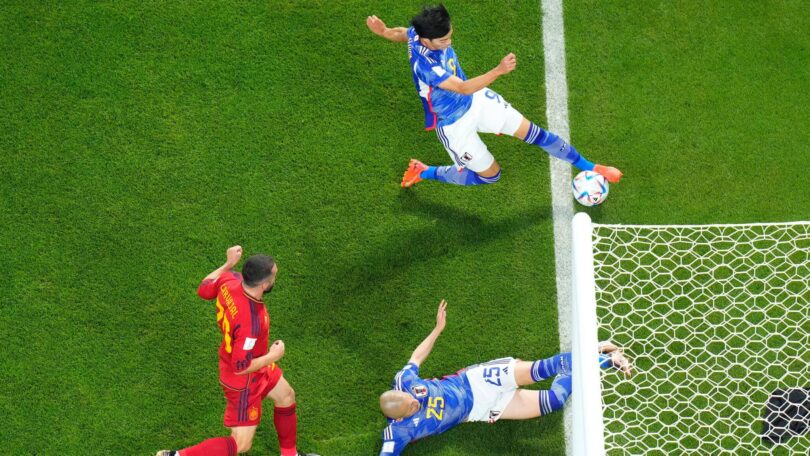 Spain’s early lead, given by Alvaro Morata, was pegged back just after the break by Japan substitute Ritsu Doan. Moments after Doan’s equalizer, Ao Tanaka bundled the ball into the net to give Japan a 2-1 lead. Still, the referee initially ruled no goal, as the ball had appeared to go out of play before Kaoru Mitoma cut the ball back to Tanaka.

After consultation with the VAR, however, the referee was told to change his decision, and the goal stood. Though from the angles provided by TV cameras, the ball looked to have gone out, the VAR, Fernando Guerrero of Mexico, concluded that the curvature of the ball was still overhanging the line, meaning, by order of the law, the ball was still in play when Mitoma crossed it.

Antoine Griezmann thought he had scored France’s equalizer in the 98th minute against Tunisia in their final group-stage game, only for the VAR to rule out for offside.

Griezmann’s goal was ruled out as the attacker stood in an offside position before the free-kick was put into the Tunisia penalty box. Even though Griezmann made no attempt to play the ball, Tunisian defender Montassar Talbi was forced to head the ball and clear the lines. But Talbi’s clearance dropped right in front of Griezmann, who scored.

While referee Matthew Conger gave the goal, he was asked to double-check the action on the VAR screen. After a review, he overturned his decision to disallow France’s equalizer.

Portugal’s captain Cristiano Ronaldo made history when he became the first player ever to score at five different editions of the World Cup in the 3-2 win against Ghana in the group stages at Stadium 974 in Doha.

However, how the Portuguese superstar achieved the feat sparked a lot of controversy among the football faithful. In the 62nd minute, Ronaldo raced into the box before seemingly getting tripped by Ghana defender Mohammed Salisu.

The referee pointed to the spot without any hesitation, and there wasn’t a subsequent VAR check. Additional replays revealed the Portugal skipper had taken a fall after the slightest of touches from Salisu. Ronaldo ended up scoring the resultant penalty to give Portugal the lead.

The group-stage game between Poland and Argentina was 0-0 when Argentina was awarded a penalty for a foul on Lionel Messi by Poland goalkeeper Wojciech Szczesny. 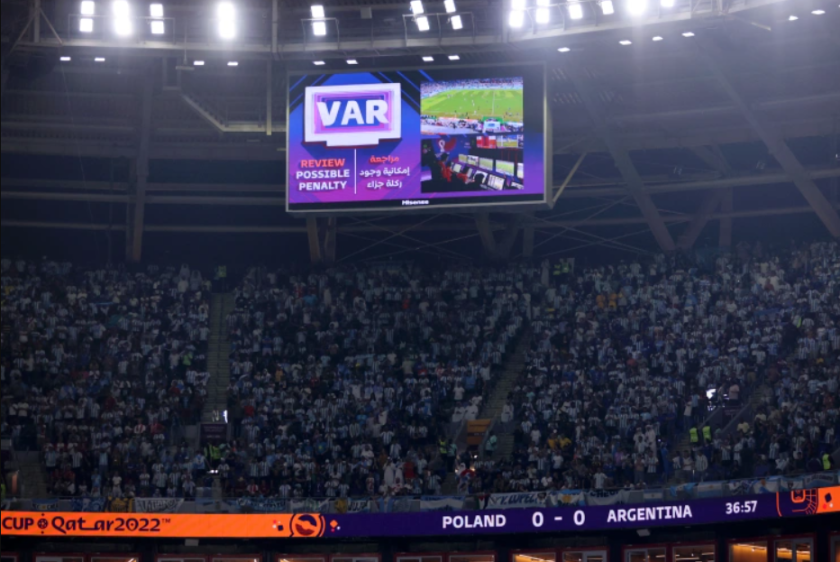 Szczesny came out to punch the ball, but Messi got his head to the ball first, with the Polish shot-stopper’s fist then colliding with the Argentina skipper. The VAR, Paulus Van Boekel, advised referee Danny Makkelie to check on the monitor, and upon a second look, he awarded the spot-kick.

While Szczesny’s hand did hit Messi’s face, the contact was minimal. It was made well after the Argentinean had headed the ball, meaning it had no interference from the goalkeeper on him potentially scoring. In the end, justice was done as Szczesny kept out Messi’s penalty.

Portugal was leading Uruguay 1-0 deep into second-half stoppage time when Jose Gimenez handled the ball in the box. Still, the referee waved away cries of penalty from the Portuguese players.

The referee was called to the monitor to have a look at the handball incident, and replays showed the ball to have struck Gimenez’s trailing arm, which he was using to balance himself from not falling on the ground, as he went to stop Bruno Fernandes.

The Laws of the Game clearly state that players should not be booked for handball, even if their arm is away from the body. Nonetheless, the referee changed his decision and awarded Portugal a spot-kick, which Bruno Fernandes coolly slotted down the left of the goal.