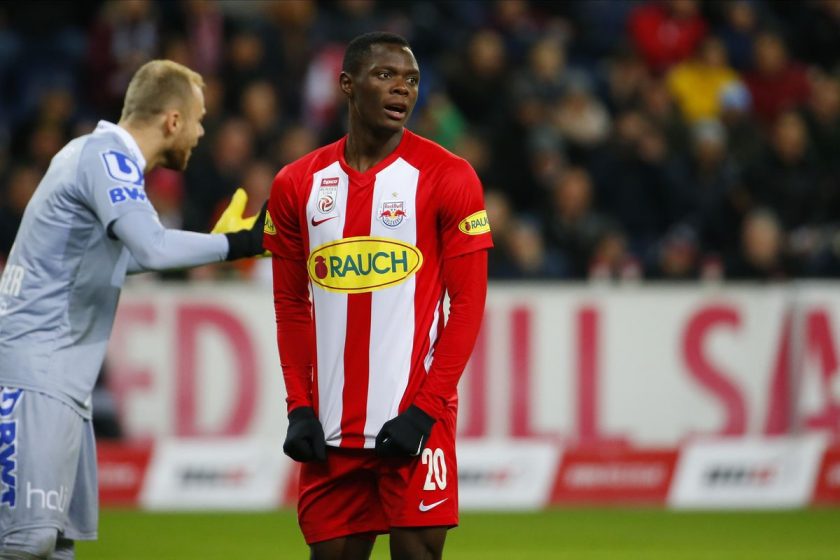 Patson Daka, 22, enjoyed a stellar campaign with Red Bull Salzburg, scoring 29 goals in 36 games. He took the mantle of prolific goalscorer at Salzburg since Erling Haaland left the club for Borussia Dortmund in January 2020.

The Zambian international’s meteoric rise in the Austrian Bundesliga has already turned plenty of heads across England and Europe. The likes of Manchester United, Chelsea, Liverpool and Tottenham Hotspur have all shown interest in the striker.

Despite an incredible season in the Austrian Bundesliga, Daka, who is believed to prefer a move to the Premier League this summer, could be available for a measly £17m.

Meanwhile, Leicester City have performed really well under Brendan Rodgers in the last two Premier League campaigns, even if they’ve narrowly missed out on the Champions League on both occasions.

The Foxes will play in the Europa League next season after finishing fifth on the table. Rodgers, who has built an exciting side mix of young talents and experienced heads, is keen to strengthen his squad during the ongoing transfer window.

The Midlands club don’t really need to make wholesale changes to a squad that is already bursting with quality but the ageing of Jamie Vardy is bound to give Rodgers some food for thought.

Jamie Vardy has established himself as one of the Premier League’s deadliest poachers in the last five-six years. He has scored 81 goals in all formats in the last four seasons combined for the Foxes, including 17 strikes in 42 games this past campaign.

However, the former England international is 34 and showing signs of slowing down, meaning it is high time for the club to look beyond Vardy. Rodgers also has Kelechi Iheanacho in his striker department, and despite the Nigerian international enjoying his best season in front of goal for Leicester last season with 19 strikes, he isn’t quite fully ready to dislodge Vardy.

Thus, signing a long-term replacement for the ageing Vardy should be a priority for the Foxes this summer.

To put things into perspective, Patson Daka has carved out a big reputation for himself as a bonafide goalscorer in Austria and his arrival at the King Power Stadium during the summer transfer window would offer Rodgers more firepower heading into 2021/22 campaign.

The 22-year-old caught the eye with his goalscoring exploits at RB Salzburg last season, attracting the attention of a host of the continent’s top teams. Blessed with pace, power and physicality, he has the required raw materials to succeed in the hustle and bustle of Premier League football.

Agreed, a proven goalscorer in the Premier League would be a much more reliable and risk-free option for Leicester City, but Daka could prove to be a shrewd acquisition if he quickly adapts to the fast-paced nature of the English game.

The Zambian international is an exciting forward who would fit the bill perfectly at the King Power Stadium. Rumoured to be available at around £17m, the Foxes must do everything to their powers and beat the stiff competition from elite clubs for Daka’s signature.