Crystal Palace are among the host of clubs to have enquired Sassuolo about the possibility of signing Jeremie Boga. 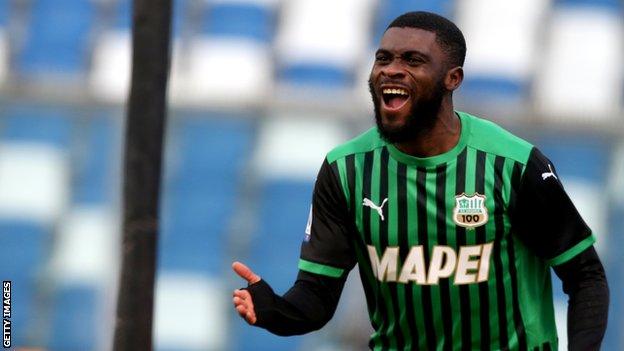 Jeremie Boga, 24, has been a real hit with Sassuolo since leaving Chelsea to join the Serie A club in the summer of 2018. The Ivory Coast international has made 87 Serie A appearances for Sassuolo to date, scoring 18 goals and registering nine assists. He managed only 27 league games last season having tested positive for Covid-19 first before suffering thigh problems.

Serie A duo Atalanta and Napoli remain interested, while Premier League’s Everton and West Ham have also asked about the 24-year-old, who has entered the final year of his contract with Sassuolo. That means Boga can agree a pre-contract deal with a foreign club in January if the Italian club do not sell him in this transfer window.

Meanwhile, Crystal Palace have been rebuilding their squad under new boss Patrick Vieira after running down contracts of a host of players, including Gary Cahill, Mamadou Sakho and Andros Townsend. On Saturday, Will Hughes arrived at Selhurst Park from Watford, becoming Vieira’s sixth summer signing.

The Eagles will head into the season’s first international without a win in three games having picked up just two points following draws with London rivals Brentford and West Ham respectively. Before Tuesday’s transfer deadline, Vieira will look to strengthen his squad further to compete for a top-half finish.

Crystal Palace lacking a cutting edge in the final third

Patrick Vieira wants his Crystal Palace side to keep more possession and attack with freedom, and while results are yet to show up, the south Londoners are certainly heading in the right direction. After the completion of three league games, it is clear to see that Palace still have some problematic areas in the squad that need addressing.

One of those is the lack of cutting edge in the final third, with Vieira’s side managing only two goals. The south London outfit currently have Christian Benteke and Jean-Philippe Mateta as specialist strikers, while Jordan Ayew and Wilfried Zaha can play anywhere across the front-line.

The injury to Eberechi Eze has denied the Eagles the creative spark and flair required to open up teams from midfield, and while loanee Conor Gallagher has shown a lot of promise, Vieira could do well by bringing in an attacking player before Tuesday’s transfer deadline.

Jeremie Boga could be an exciting addition to the Eagles squad

In that regard, Jeremie Boga would fit the bill perfectly at Selhurst Park. The lively wide-man, who can operate anywhere along the front-line as well as in midfield, has been a key player for Sassuolo over the past few years.

A tricky customer with excellent dribbling ability and ball control, the Ivorian plays with a certain kind of directness, energy and aggression. He is very difficult to contain on his day and has shown his eye for goal as well in Serie A, Boga can adapt to the demands of Premier League football without facing a lot of problems.

The Ivory Coast international is the kind of player who would relish the chance to prove his worth in England’s top-flight having let go off by Chelsea at a young age. And if Crystal Palace can beat the competition to his signature, Boga could turn out to be one of the smartest signings of the summer transfer window.