Chelsea are set to go up against Manchester United for the signing of AS Roma’s highly-rated defender Gianluca Mancini in the summer. 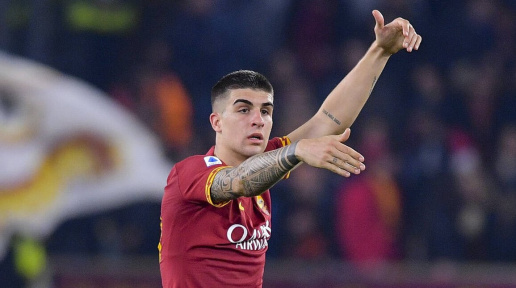 A youth product of the Fiorentina academy, Gianluca Mancini, 24, had spells at Perugia and Atalanta before signing up with AS Roma in the summer of 2019, initially on loan. Since arriving at the club, the Italian has been a regular fixture at the back for Paulo Fonseca’s side, making 68 appearances so far.

The centre-back has shone in both Serie A and the Europa League this campaign. In the league, he has registered four goals and two assists in 24 appearances, missing just three games. Mancini’s contributions at both ends of the pitch have piqued the interest of two of the Premier League’s biggest clubs.

Because of Covid-19’s impact on their finances, AS Roma could be forced into selling Mancini for just £27m in the summer.

Thomas Tuchel has steadied the Chelsea ship since replacing Frank Lampard at the club’s helm. Under Tuchel, the Blues have gone 10 Premier League games unbeaten. With four back-to-back clean sheets, the Londoners are now among the favourites to secure a Champions League spot.

However, Chelsea are struggling for goals and have netted just 13 goals in 12 games under their new manager. With the attacking riches at his disposal, it could be hoped that Tuchel quickly finds the balance upfront and gets his side firing all cylinders. What should please the German tactician since arriving at Stamford Bridge is the Blues’ improvement at the back.

Andreas Christensen and Antonio Rudiger have been excellent, establishing themselves as two of the three at the back in Tuchel’s system. Cesar Azpilicueta has also performed well but he is in his thirties. Thiago Silva is in the twilight of his career and has been on the sidelines since picking up a muscle injury against Tottenham at the start of February.

Kurt Zouma hasn’t got a lot of opportunities to play under Tuchel, while Fikayo Tomori is currently on loan at AC Milan.

The Blues must sign a centre-back in the summer

Chelsea may have tightened things at the back but without consistency, they simply cannot flourish and challenge for trophies next season. Zouma and Rudiger remain prone to errors and with Silva and Azpilicueta having entered their 30’s, Tuchel must prioritise strengthening the defence ahead of the new campaign.

Should Chelsea go for Gianluca Mancini?

Gianluca Mancini is a highly-rated defender in Serie A football, and having impressed for AS Roma over the last two seasons could be the man to strengthen Chelsea’s defence.

Standing at 6ft 4ins tall, Mancini is a strong and powerful defender who is composed on the ball and blocks the opposition with the utmost ease. A good reader of the game, the Italy international is also considered to be a threat during set-pieces and that is evident from the four goals he has scored in the league this season.

Undoubtedly, the former Atalanta man possesses all the qualities to succeed at a higher level and can become a mainstay for the best part of the next decade in Chelsea’s backline. Therefore, without hesitation, the Blues must go all out to sign Mancini in the summer.