Oh, how we’ve missed the Premier League. An explosive return to action has quickly wiped away memories of three months without football, as the nation’s beloved football machine slowly gets up and running again.

The return to action in June has already provided us with one outcome; that the title, which was effectively secured by Liverpool before Christmas had even rolled around, has now finally been mathematically confirmed.

However, the race for the top 4 and the battle to escape relegation have arguably never been more intense, and it is these parts of the table that will likely go right down to the wire, keeping us enthralled to the end. Amidst all this, whilst some players have visibly struggled to re-adapt to the pace of the league after the long break, others look like they’ve never been away. Many of the usual suspects feature in our first ever June team of the month, but of course, as always there have been some surprises in store.

Team of the month in Premier League – June 2020 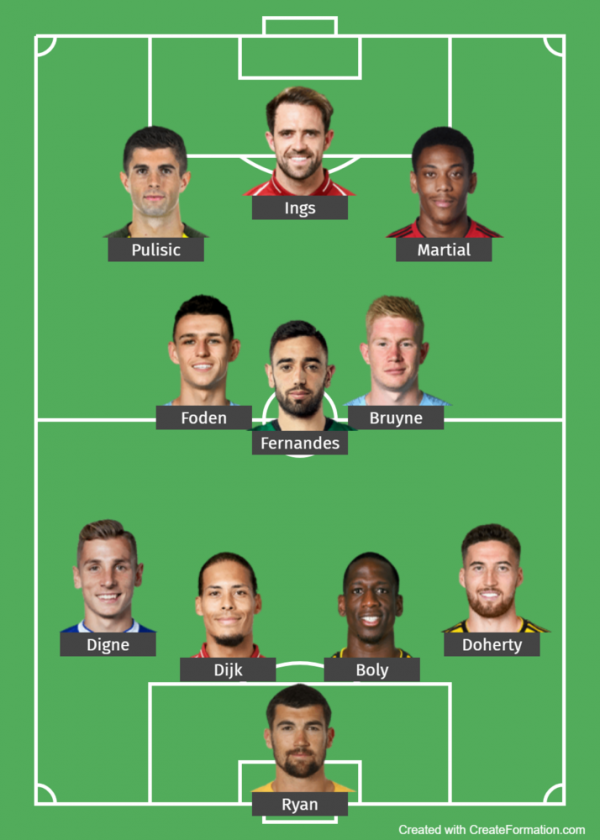 Before lockdown, Brighton were in freefall and looking over their shoulders nervously at the relegation zone. Fast forward through just a couple of June fixtures and all of a sudden their place in next season’s top flight seems all but secured. Goalkeeper Mat Ryan has more than played his part in the Seagulls’ revival, with the Australia keeper performing impressively in the victory over Arsenal and hard fought away draw against Leicester.

Being the classy side that they are these days, it was hard to envisage Wolves struggling even after three months away from the pitch. In fact, they have flourished, with right back Matt Doherty again playing a big part in Wolves’ success at both ends of the pitch. The Republic of Ireland international helped his side achieve three clean sheets in a row in June, and bagged an assist against West Ham with a typically brilliant cross.

Of course, it’s hard to mention Wolves’ defensive solidity without mentioning Willy Boly. The central defender had had his fair share of injuries and time away from the pitch this season even before the league’s suspension, but whenever he comes back it always looks like he’d never been away, and he deserves as much credit as anyone for Wolves’ back to back to back clean sheets. Surely the league’s best defender outside of the traditional ‘top 6’.

It had to be him – didn’t it? In the month that Liverpool clinched the title, it was only natural that the Reds’ finest player had to feature in our team. Strong, intelligent and commanding as ever, the Dutch captain helped Liverpool achieve a clean sheet in both of their June fixtures.

It’s been a steady and measured return to Premier League life for the other half of Merseyside, who eased themselves into a goalless draw with their red rivals and a narrow win over Norwich. Similar to Liverpool, Everton also kept two clean sheets out of two, and left back Lucas Digne was key to that. The defender is so vital to Everton at both ends of the pitch and having demonstrated his value to the team once again, it will surely be a priority for the Toffees to hold onto him over the summer.

Manchester City’s continuing inconsistency has seen them finally surrender the title, but midfield maestro Kevin De Bruyne hasn’t let his standards slip one bit. Brilliant as ever, the Belgian playmaker provided 2 goals from midfield in 3 June matches. It will be quite astonishing if he is not selected for the player of the year award.

After an explosive return to action with United, it’s fair to say that Bruno Fernandes is proving to his naysayers that his brilliant start to life in the North West won’t just be a flash in the pan. The attacking midfielder scored 3 goals in 3 June appearances, and was particularly impressive against Spurs and Brighton. It’s difficult to remember the last time a January signing made such a rapid and invaluable difference to a team.

It hasn’t all been straightforward for Phil Foden in his fledgeling career, but it seems that he is now being given a real chance to succeed after all the waiting. The young midfielder scored against Arsenal and bagged two against Burnley, and the fact that Manchester City visibly missed him in the defeat to Chelsea is a testament to his growing influence and incredible talent. Expect big things from him next season.

Much like Manchester United as a whole, Anthony Martial has improved considerably in the second half of the season, and now looks to be achieving the consistency that his career has often been lacking. The forward scored Manchester United’s first hat-trick since the Ferguson era against Sheffield United in June, and has looked similarly impressive since.

Chelsea have returned strongly from the long break, as they look to tighten their grip on the top 4 in their maiden season under Frank Lampard. Christian Pulisic has arguably been the Blues standout player in their return to action, having scored in both of Chelsea’s victories over Aston Villa and Manchester City. It’s been a decent debut season in England for the young man, who looks like he will only get better.

Like United, Southampton have also enjoyed a strong second half of the season, recovering admirably from their difficult start. Saints talisman Danny Ings has been key to that and picked up from where he left off when the season resumed, scoring 3 goals in 3 matches to help the Saints pick up two wins that propelled them into the safety of mid-table. The striker, now near the very top of the league’s goal-scoring charts, captains our side and completes the XI.

The Reds want to sign Kabak for an initial fee worth £20m from Schalke FC. Liverpool are continuing their search for a central defender in January following Virgil van Dijk’s season-ending injury. According to a report from the Daily…

Citizens are still keen on signing the wantaway Barcelona star. Manchester City are reportedly preparing a fresh bid worth £15m in January to sign Lionel Messi from Barcelona. The attempt is seen as a pre-emptive one to edge out all the…

Dybala has struggled with injuries of late.  Chelsea are reportedly considering a move for Juventus forward Paulo Dybala next summer as the Londoners want to extend their spending spree for another summer. It is also added that the Blues missed…

The duo would be the deadline day signings for Manchester United. Manchester United have reportedly reached an agreement for the signings of Edinson Cavani and Alex Telles. Cavani, who has been a free agent for a while, is said to have…

Houssem Aouar is set to remain at Lyon, confirmed by reports. Arsenal have missed out on their midfield target Houssem Aouar, who is reportedly set for Lyon stay. Earlier, Lyon President Jean-Michel Aulas had set a deadline on Friday for the…