Both the midfielders have been pivotal for their respective clubs. 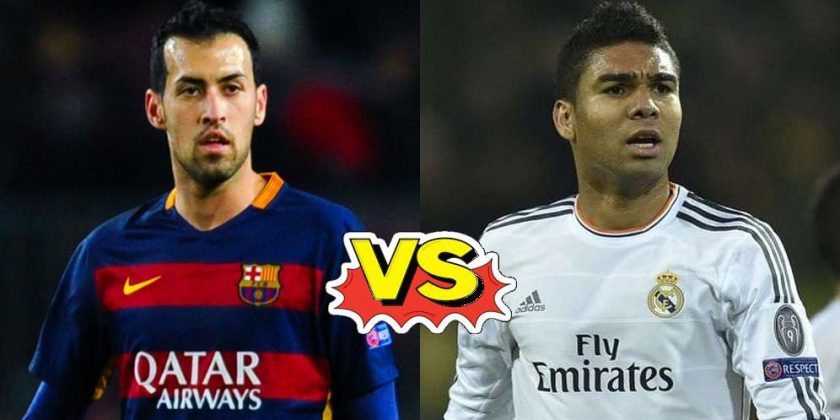 While the age-old debate of Cristiano Ronaldo vs Lionel Messi remains relevant up to now, it is easy to forget some of the other players (midfielders and defenders) and the battle between their peers. Such is the case with Real Madrid’s Casemiro and Barcelona’s Sergio Busquets, who are arguably the best and most expensive defensive midfielders in football at present.

One of the positions that always attracts less attention is the central defensive midfield position; for the real football geeks, they know how important such a position is. Casemiro and Busquets have been gracing that role for quite a long time, and they remain in the top of their game – their trophy cabinet speaks for itself. Busquets, who is senior to the Brazilian Casemiro, has been untouchable in that revered regista role since moving to the Catalans senior team in 2008. While ups and downs are part of any footballer, let alone Busquets, it is his consistency and endurance that makes him class apart.

On the other hand, Casemiro may look novice in front of Busquets in terms of the experience and age, but what the 28-year-old achieved in such short period can be only a dream for many other players. The Brazilian became an integral part of the Los Blancos in the 2015-16 season, straight after his loan spell with FC Porto, and has since helped his side become serial UCL winners. Besides, he also tasted similar success with his national team, winning the Copa America last year.

Unsurprisingly, both players have been as pivotal as they were before this season, with Barca and Real fighting tooth and nail for the La Liga supremacy. Both the midfielders are due to play a vital role for the Champions League round of 16 fixtures next month.

Who has been the best in the ongoing season?

Speaking about the traits, Casemiro and Busquets differ a lot, although they presume the same role on the field. The former one tends to be more of a destroyer-type midfielder – excels at ball-winning and breaking attacks while the latter is an all-rounded regista.

Busquets looks to have rejuvenated since the undertaking of Quique Setien whose philosophy is to build the attack from the back where the pivot of three midfielders plays a crucial role. Elsewhere, Under Zinedine Zidane, Casemiro provides more of defensive support for the marauding full-backs and the No.8s – evident with his average of 3 tackles and 2 interceptions, higher than of Busquets.

But Busquets edges Casemiro at passing, averaging 81 passes per game with an accuracy around 90%. It shows how significant he is to the Blaugrana during the build-up and orchestrating the attacks. He is also adept at breaking down the opposition’s attacks with his positional discipline and ball-winning capabilities.

Unlike Busquets, who loves to sit and hardly feature in the attacking third, Casemiro is more adventurous to participate in the final third, having attempted 1.4 shots attempted per game with a tally of 6 goals and 3 assists in all competitions.

Although it is difficult to sort out a clear winner, Casemiro turns out to be more productive given his goals in the crucial games – one of the reasons Los Blancos are leading the league table ahead of Barca. But that doesn’t play down the 31-year-old Busquets at all cost as he is one of a kind player with an archetype difficult to be replicated by any players.