The 2018/19 Premier League was extraordinary, to say the least. Recognised by some as one of the best, it surely deserves to be among the most entertaining and the most unusual we have seen in a while. From the title race between Liverpool and Manchester City to the reborn Manchester United team, the 2018/19 season was truly a pinnacle of English football. But how did it all go down, and which team performed the best? Let’s look at the key moments between that lead to one of the closest title races in history.

It all started on October 7th, when Liverpool and City met at Anfield in the 8th round of EPL, both still undefeated at that time. Liverpool came into the match with a 6-1-0 record after a draw against Chelsea, while City held the same record due to a draw against Wolves. The match ended in a 0:0, however, it was recognised by many as a match that should have ended in Manchester City’s favour. While we could argue both teams performed equally well, it was Manchester City, or more specifically, Algerian Mahrez, who missed the penalty kick in the 86th minute, and with that lost his team 2 additional points. Nonetheless, Manchester City were still sitting at the top of the league due to their strong goal difference.

Fast forward, to December 16th, when Liverpool climbed back to the top of the league, passing City by 1 point after defeating Manchester City 3:1. Much of the credit belongs to Shaqiri, who scored twice in the span of 7 minutes and earned his team a win. The lead of one point grew in the upcoming weeks and even reached 7 points by the time Boxing Day rolled around. On December 26th Manchester City lost 2:1 against Leicester only 4 days after losing 2:3 against Crystal Palace, which raised questions if Manchester City will even fight for the title. While we were asking ourselves about the quality of Manchester City, Liverpool continued to impress with a 5:1 win over Arsenal in December 29th, which catapulted them 9 points ahead of City on the leaderboard.

With a rather big margin, the teams were to meet on January 3rd, which was the key turning point of the title race. Manchester City won 2:1, which did not only turn the tides of the title race but also resulted in the first ever Liverpool defeat of the season.

The defeat started a run of mediocre performances from Liverpool, who were slowly caught up by Manchester City, who were only 1 point behind Liverpool by the 27th round. But the minimal lead of Liverpool did not last for long, as they lost it in the 29th round, when they yet again drew, this time against Everton, who held the Reds at 0:0 draw. That day also marked the day, when Liverpool fell from the throne and never managed to get back up. City, despite some close matches in the remaining rounds always seemed to be a step ahead of Liverpool, who lost a 9 point lead and had to admit defeat to City, who deservingly climbed to the top of EPL and won the title for the 2nd year in a row. 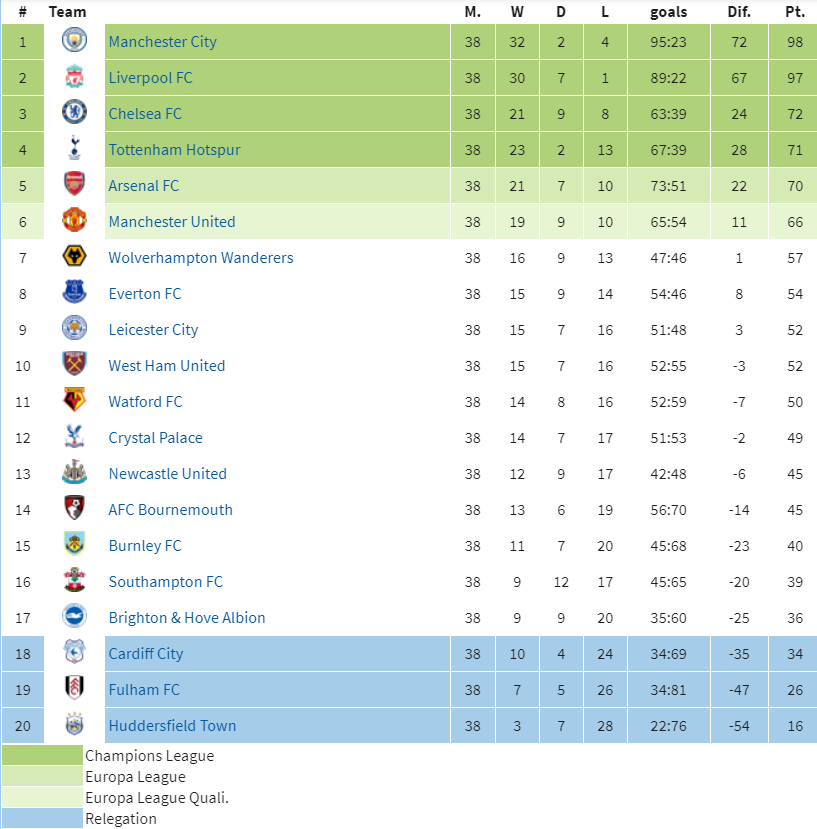 Manchester City won the league with 98 points, followed by Liverpool who ended with 97 points. Interestingly enough, Liverpool only lost once in 38 matches, however, it was the 7 draws that sunk their ship and hopes to win the title. Manchester City on the other side lost 4 matches but drew only 2.

Moving down the leaderboard, Chelsea fought their way to the 3rd spot, where they finished the season with a 21-9-8 record. A point behind finished Tottenham, who despite losing their chance to join the title race proved to be a dominant force in the Champions League. Spurs ended the EPL season with a 21-2-13 record. Only a point behind finished Arsenal, who got extremely close to finishing in the top 4, but lost their chance due to terrible performances in the last fixtures of the season, when they lost 3 in a row. Nonetheless, just like Tottenham, Arsenal enjoyed a successful Europa League campaign. At 6th place finished the new and “improved” Manchester United, who enjoyed a relatively successful run since they changed their head coach, but seemed to run out of steam towards the end of the season. United finished the season 19-9-10, whole 4 points behind Arsenal and 5 points behind the top 4 spot which would be their ticket back to UCL next season.

On the other side of the table, we have got Huddersfield, Fulham and Cardiff, who failed to perform up to par and will be replaced by Norwich City, Sheffield United and the winner of the Championship playoffs in the next season of Premier League.