The much-anticipated El Classico in the Spanish Supercup semi-finals lived up to its hype and reputation as we were greeted with 120 minutes of football with the final scoreline reading 3-2 in Real Madrid’s favour. 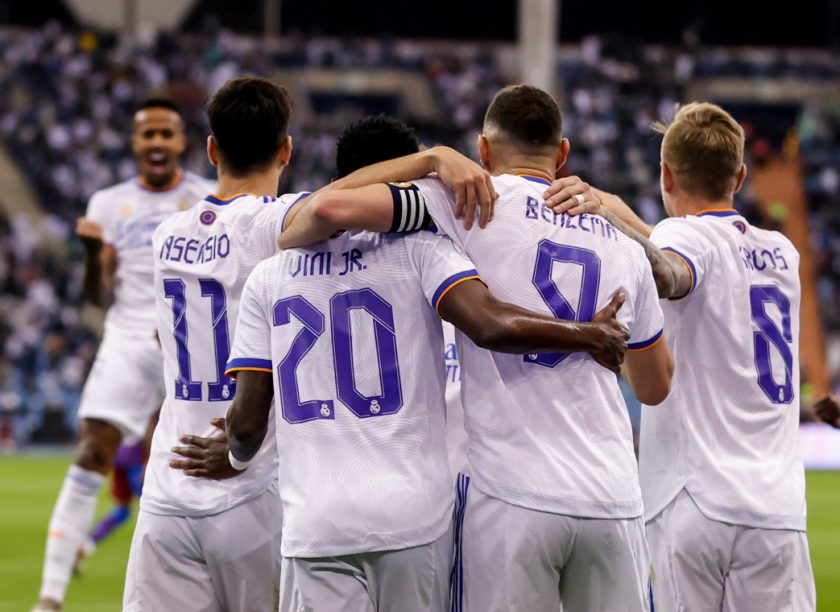 The game started with Real Madrid exploiting Barca’s Highline by launching attacking runs from behind the line. It paid rich dividends and Vinicius Jr. opened the scoring for the Los Blancos in the 25th minute. Sergio Busquets was caught unaware by Karim Benzema who managed to steal the ball off the defensive midfielder, with Vinicius waiting on the flanks and only the Highline to beat. With that said, the opener woke up the visitors and they soon started to apply pressure on the Whites. Ousmane Dembele in particular caught the eye with his chance creation and dribbling but his finishing was off the mark.

However, at the stroke of half-time, Luuk de Jong pulled level for the Blaugrana in the 41st minute, ensuring that the two teams start on equal footing in the second half.

A different Barca seemed to have taken on the field in the second half with Xavi Hernandez bringing on Pedri and Ez Abde for Frenkie De Jong and Ferran Torres as his only two half-time changes. Pedri, playing after four months started the second half well with a shot that narrowly missed the target. Abde on the other hand put his physicality to good effect but his lack of experience meant that he was spent too long on the ball to deliver the final pass.

While Real Madrid largely attacked on the break, Karim Benzema was the best player as he was the one who exploited Barca’s weak backline to the maximum extent. The French striker’s movements into spaces were impeccable and were comparable to his chance creation. Vinicius scored the opener of the game on the back of an excellent through ball by the 32-year-old. In the second half, Benzema found joy of his own as he managed to enter the scoresheet as well, something that he has managed almost every game this season.

Ansu Fati comes on in the 65th minute

Fati finally made his comeback after his hamstring injury and managed to get on the scoresheet in the dying embers of the 90, helping his side pull level once again. Jordi Alba’s cross into the box was headed sweetly past Thibaut Courtois by Barcelona’s number 10 and that ensured that the game entered into extra-time.

Barcelona conceded their third goal of the game when Fede Valverde managed to bury Rodrygo’s pass in the back of the net. It was yet another near-perfect counter by the Los Blancos as the pass to Rodrygo seemed to go a bit wide and Vini Jr. stepped over the 21-year-old’s ball, giving Valverde the chance to finish the game. After the third goal, Barcelona could not create much except in the final few minutes of the second half of extra-time when Ansu Fati’s overhead kick attempt went marginally wide.

Despite the loss, Xavi Hernandez would be pleased to know that his team showed the fighting spirit to compete and to win, only to fall marginally short against a superior Madrid side. The legendary midfielder when he took over as the coach of Barca opined that the problem at Camp Nou was more mental than technical and the former La Liga champions put up a pride-worthy performance.

Ronald Araujo, despite being operated on for his hand fracture just a few days before the game was at his absolute best as he managed to stop Vinicius Jr. to a great extent when the rest of the Barca backline was struggling against the explosive pace of the Los Blancos frontline.

Pedri’s return and Ousmane Dembele playing through the entire game is also a welcome positive for the 41-year-old, who must now ensure that his side does not slip up in the race to secure a UEFA Champions League spot.

The lethal duo of Vinicius Jr. and Karim Benzema did not let Carlo Ancelotti down as they managed to enter the scoresheet yet again. Their partnership in front of the goal has been a major reason why Madrid have been so successful this season. Apart from that, which has become a regular occurrence, Eder Militao was another standout performer for the Whites. Luka Modric and Casemiro made sure that Barca could not maintain possession for long spells.

Fede Valverde, despite not having many opportunities off-late managed to get on the scoresheet and has potentially given Carlo Ancelotti a welcome selection headache for the Supercup final.

Barcelona will return to Spain knowing that they are perfectly capable of competing and will look to employ their newfound spirit against Atheltic Bilbao in the Copa del Rey Ro16 on 19th.

Madrid now face a wait before they take on either Atleti or Athletic club in the finals of the Spanish Supercup on Sunday.