RB Leipzig forward Timo Werner has impressed many clubs this season with some magical displays. According to Sky Sports, the 24-year-old star has a tempting £52M release clause in his contract. However, this clause ends in mid-June. Liverpool are widely reported to be favourites to trigger this clause and sign the German international. The current champions of Europe look destined to win the Premier League this season; this would help entice Werner into joining The Reds. 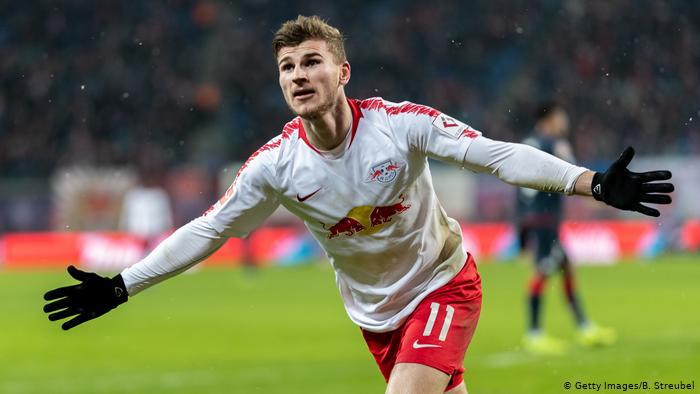 Although current centre forward Roberto Firmino is a key cog in Jurgen Klopp’s machine, he lacks a consistent ability to score goals. This is not the case for Werner – he has racked up 21 goals in 25 Bundesliga games. Describing the Leipzig man as a phenomenon would be an understatement. He would add a unique dimension to Liverpool’s attacking force – something lacking in a striker since the days of Luis Suarez.

In February, Werner heaped praise on the Liverpool manager. He told German Sky: “Last year, until I extended my contract, it was always Bayern Munich [that I was linked with]. Now Liverpool has come up through the media and through our game in England.

“You have there the best coach in the world with Jurgen Klopp.

“There are many things that would suggest that my style of play might be a good fit, but I’m not worried about it because we have so much to do with Leipzig.

“You can see we won against Tottenham, but we also have a second leg. It’s hard to think about where to play next year if you want to step on the gas here and now.”

If Werner admires Klopp, the feeling is mutual. In April, the Daily Mail reported that Werner is the gaffer’s No. 1 transfer target. This report also claims that Klopp wanted to meet the player to negotiate a deal. However, strict health guidelines enforced that they could not meet face-to-face.

Many pundits and former players have reacted to this transfer rumour. Football analyst Kevin Hatchard claims Werner “would do very well in the Premier League”.

Hatchard said on TalkSport: “They’re talking about the top end of €60million. So, for me, for a player of his quality and experience, bearing in mind this is a guy who is in his early to mid-20s and he has played over 200 games in the Bundesliga.

“So vastly experienced already, improving all the time, I think he has really benefited from playing under [RB Leipzig boss] Julien Nagelsmann because he played as an out-and-out striker for pretty much his whole career.

“Nagelsmann has said to him, ‘Look I think you can be much more dangerous playing from a deeper role’.

“So he has almost been playing as an attacking midfielder at times – kind of driving past defences with his pace.

“So he is improving and I think he would do very well in the Premier League.”

Hatchard added: “He has said on numerous occasions he thinks the Premier League is an exciting prospect and some pretty reliable German media sources are saying that Liverpool are very much one of the clubs who want to sign him and he is keen.”

If Liverpool decide to activate Werner’s release clause, they will presumably reap the rewards. However, they have two months to complete this transfer, or they would have to pay a much larger fee. They need to act quickly.