Barcelona have made Erling Haaland their number one priority for next summer. The Norweigan striker’s time at Borussia Dortmund could well see curtains as his €75 million release clause is likely to be triggered. 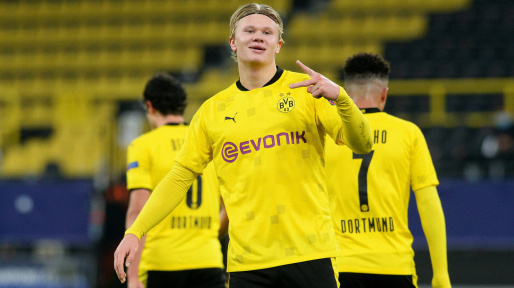 A host of elite European clubs are interested in signing the 21-year-old. Barcelona, Real Madrid, Bayern Munich, Manchester United, Manchester City, Chelsea, and Paris Saint-Germain have all been linked with the Dortmund striker.

Barca in particular, are one of the favorites apart from rivals Real Madrid and Manchester City to land the player’s prized signature. There have been rumors circulating that the player’s agent Mino Raiola has assured Los Cules president Joan Laporta that his client will join Barca, should they gather the minimum required funds for the operation. To date, the former La Liga champions have been confident about their chances of signing the talented striker, despite their recent financial woes. With that said, Real Madrid have also been linked with signing both, Kylian Mbappe and Erling Haaland but the latter wanting a sporting project where he is the protagonist, there is a very good chance that he might snub the move to Santiago Bernabeu, should an offer arise.

The Los Blancos apparently want Haaland to spend one more season at Dortmund, as Karim Benzema’s contract runs down in 2023. It is unlikely to happen and Barcelona have already launched their efforts to sign Haaland.

The source also reports that Xavi personally met with the player to explain to him the sporting project. The details of the latter remain in the clouds but it is evident that the Schwarz Gelben striker is the Los Cules’ priority. Barca believe that they are the player’s priority as well. It is all shaping up very nicely for the Blaugrana.

Barcelona start with an advantage in the negotiating room

President Joan Laporta holds a close personal relationship with the player’s agent Mino Raiola and that could play right away into the court of the former La Liga champions. However, it is the player’s father who could spoil the party for Barca. Alf-Inge Haaland, a former Manchester City player, wants his son (Haaland) to join either Manchester City or Real Madrid. This is as per various reports but if it is the case, negotiations could prove to be tricky for Joan Laporta and Mateu Alemany.

The club is currently negotiating with potential new sponsors and a CVC deal with La Liga. The money will come but the entire operation could well cost up to €300 million. With that said, the club is also planning to make quick-fire sales. The likes of Samuel Umtiti, Martin Braithwaite Clement Lenglet, Oscar Mingueza, and Memphis Depay could be offloaded next summer. This would generate some significant space in the wage bill. Thus, financially Barca can match other teams but it will all boil down to the sporting project that they have already proposed to the player.