EPL Fantasy Tips for Gameweek 9 are ready for the upcoming weekend after the international break. English Premier League is back with round nine, which promise to provide us with exciting fixtures, featuring only the best of the best England football has to offer. When we talk about the best, all the eyes will be on Liverpool and their clash with Manchester United, which in eyes of many could be the match that ends Klopp’s side perfect run. Will that be the case or not is anyone’s guess, yet we are not here to discuss that, but rather look over our fantasy team, fantasy EPL tips, the changes we made to it and our expectations for GW9. 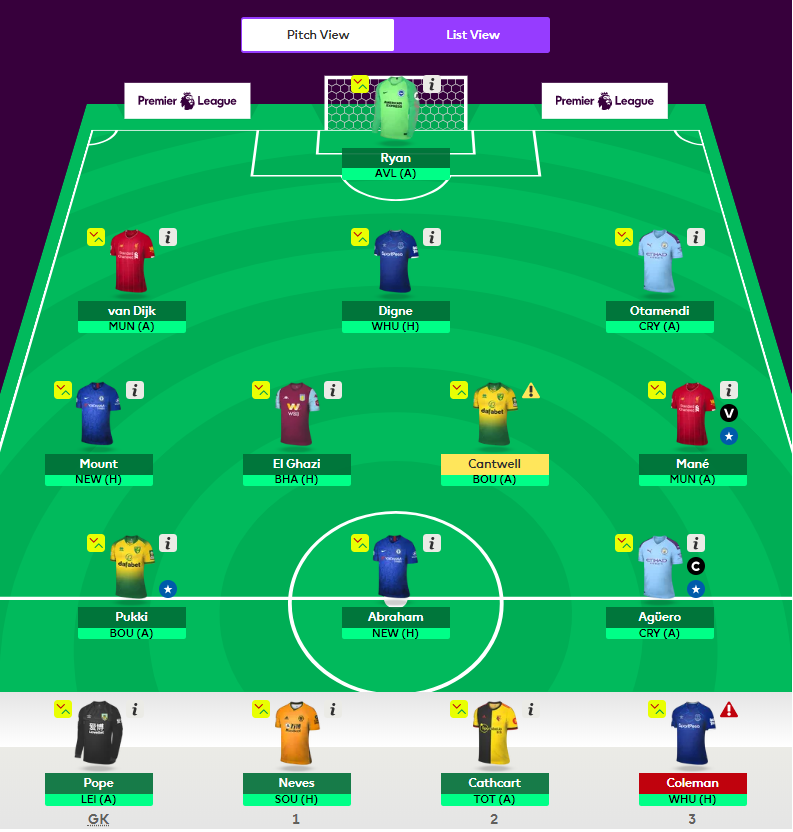 Following a terrible arm injury of Hugo Lloris, we had to replace him with another goalkeeper and after looking at the market and prices of goalkeepers, we are confident that we found the right replacement for a very reasonable price. Joining Pope in our fantasy team will be Mathew Ryan from Brighton, who cost us barely £4.6, which in our eyes is a bargain price for a keeper that produced ten, four and seven points in the last three rounds. Brighton will face off with Aston Villa next round, who have been on fire with their scoring, however, we feel like Ryan can impress here, or at least fare much better than Pope who will visit Leicester on Saturday.

We will enter gameweek nine with three defenders. Van Dijk, Otamendi and Digne. Van Dijk has a tough match ahead of him, as Liverpool take a visit to Old Trafford. Nonetheless, we can trust him to play a crucial role in Liverpool’s defence, which is why we will hope he can step up and earn us some points. Next to him, we have Digne, who is not only picked for his defensive return but his ability to get into scoring positions. Everton will clash with West Ham next week and while we can’t say he is guaranteed to earn double-digits in that fixture, the possibility is still there. Last but not least, we have Otamendi, who is picked for the same reasons as Manchester City visit Crystal Palace at Selhurst Park Stadium.

Mount, El Ghazi, Cantwell and Mane are our four midfielders heading into game week nine. Mount has impressed with his performance last week against Southampton when he scored a goal and earned us seven points. Seeing how has become a very important part of Chelsea’s midfield, we can trust him to produce something this gameweek as well. El Ghazi is in a similar position, considering he has proven his worth with five, seven and nine points in the last three rounds. Last round he accumulated nine points with two assists, and we can trust him to keep the fire going in Aston Villa’s meeting with Brighton this Saturday.

Cantwell and Norwich have been far from impressive lately, however, they are bound to bounce back sooner or later. There are of course no guarantees, however, we believe Norwich can exploit Bournemouth’s poor defence this weekend. Last on the list, we have Mane. A lot of speculations arose whether Salah is a better option compared to Mane in terms of scoring, and while there are some solid arguments to be made in favour of Salah, we will continue our trust in Mane. He has scored a goal and added an assist in Liverpool’s win over Leicester last round and we trust him he can produce something against Manchester United and their questionable defence this weekend as well.

We have got a new addition to our attacking lineup, and while it did cost us an additional four points to bring him in, we decided to replace Barnes for Tammy Abraham. While Abraham failed to score in the last two home fixtures, we believe he is a steal at £7.6, especially considering Chelsea have a very favourable schedule ahead with Newcastle, Burnley, Watford and Crystal Palace as their next four opponents. We decided to keep Pukki in the team for a bit longer. While many people lost hope in him following less-than-impressive performances in the last three fixtures, we have hope Norwich can produce something in round nine. And as always, our third striker will be Aguero, who failed to impress in round seven and eight, however, with a clash against Crystal Palace on the schedule and Man City’s desperate need of points, we expect him to shine and score at least once.

In our substitutions, we have got Ryan, Neves, Cathcart, and Coleman.

With that, we conclude our GW9 overview. We are once more venturing into the next round with a lot of question marks above some of the players, namely Cantwell and Pukki, who we did consider swapping out, however, with a very favourable match ahead, we will trust Norwich will have a chance to shine and bounce back.  Other than that, we have put a lot of hopes in our new addition in the attack, that is Abraham, who seems to be on the rise and while he did not play full 90 minutes yet, he is in our eyes a steal at the price we got him. We will stick with Aguero as captain for the GW9, as we believe he is the main man who can walk away with a nice sum of points.