The upcoming round of English Premier League will see many Fantasy Managers face a huge dilemma as they prepare for the Double Gameweek 29, which will see Arsenal and Manchester City face-off in a “bonus match”, which should have been played in GW 28 and will now take place on Wednesday. While picking as many Arsenal and Man City members as possible for this week is a reasonable decision, there are other great fantasy tips for us to consider.

So let’s take a look at how our fantasy team will look like and which players do we recommend for you to pick ahead of GW 29. 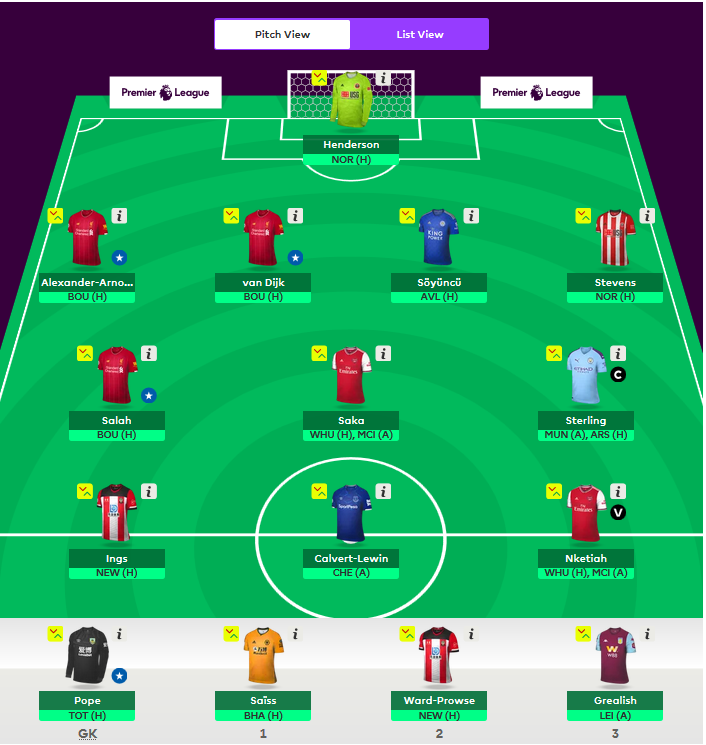 For GW29, we have decided to field Henderson instead of Pope, considering Pope is facing Tottenham, while Henderson is playing against the struggling Norwich. While Pope has been performing far better compared to Henderson in recent matches, we don’t like the idea of fielding a goalkeeper against the win-hungry and potent Tottenham.

We made no changes to our defensive lineup, where we will field Alexander-Arnold, van Dijk, Soyuncu and Stevens. Van Dijk and Alexander-Arnold have a lot to prove following a disastrous performance of Liverpool against Watford last round and we can be sure they will fancy their chances against Bournemouth this round. A clean sheet is expected while we will be hoping for some attacking returns as well.

Soyuncu and Stevens are both very solid cheap options for defensive pick, as they both have very favourable home fixtures ahead of them. Soyuncu and Leicester will face off against Aston Villa, while Stevens will help Henderson keep a clean sheet at Bramall Lane, where Sheffield Utd will host Norwich

We have made some changes to our midfield, by replacing De Bruyne with Sterling amid the injury concerns that could prevent De Bruyne from being 100% ready for the double gameweek. Joining Sterling we have Salah and Saka.

Salah will face off against Bournemouth at Anfield, where we expect the Liverpool star to shine and produce an attacking return. The Cherries lost both of their last away trips at Liverpool 0-3 and come off very vulnerable ahead of GW29. In their last four fixtures, Howe’s men have conceded more shots in the box than any other Premier League team besides West Ham. During the same period, Salah established himself as one of the top-five players in the EPL in attempts in the penalty area, which suggests he is set to cause some damage to this GW.

Sterling is a no brainer pick here, as we had to find a replacement for De Bruyne and his teammate comes off as the best pick out of all available. What’s more, he will enjoy a double week, which is why Sterling will also be the captain of our team for this week. Joining him in the midfield is Bukayo Saka, who holds immense potential to produce some nice points during GW29. Priced at only 4.6, he is one of the best budgets picks out there and seems to be set for two starts in GW29.

Ings, Calvert–Lewin and Nkeitah are our three strikers for this week. Ings has had an iffy period with no goals to his name in the last two fixtures, however, we can expect some better numbers from him as Southampton host Newcastle in GW29.

Calvert-Lewin has been in great shape recently and continues impress week after week. He scored more goals since Ancelotti took over Everton than any other player. What’s more, Everton’s next opponents – Chelsea, have been struggling defensively at home, which is why it’s easy to expect Everton’s striker to cause some damage and earn u a few points.

Last but not least, we have Nketiah, who has a double gameweek ahead of him. He has started each of Gunners’ last three domestic matches, scoring back-to-back against Everton and Portsmouth. Although he is a very cheap pickup, his low price should not deter anyone from giving him a go. His form and double gameweek are two main reasons why he should be considered by any Fantasy Manager and while our decision to replace Jimenez for him might backfire, we have decided to take the risk and bring the promising Arsenal striker to our team.

In our substitutions, we have got Pope, Saiss, Ward-Prowse, Grealish.

We have made quite a lot of changes to our team, yet the core remains the same. A lot of success of our team ion GW29 will come down to the performance of Sterling, Saka and Nkeitah, while we will be looking at our Liverpool trio to perform up to par and defeat Bournemouth in a bid to bounce back following their humiliating loss to Watford last week.