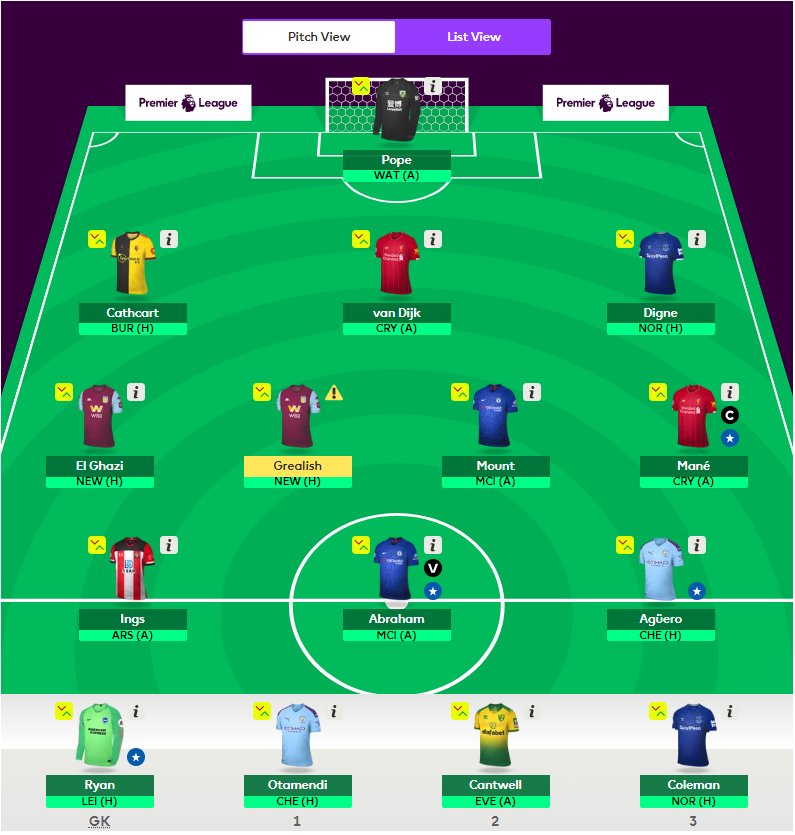 Seeing how Ryan is facing the in-form Leicester next round, we opted to keep Pope in our starting XI. He has been performing admirably well in recent weeks and seeing how he scored nine points last round, it’s easy to imagine he can put up some solid points this weekend as well. At the end of the day, we are going for a safer pick and seeing how Burnley is facing Watford, there is not a lot to discuss here.

For our defensive lineup we decided to go for van Dijk, Cathcart and Digne. Van Dijk and Liverpool will clash with Crystal Palace which should not cause too many issues for Klopp and his men. Palace have been performing poorly this season especially in defence, which does open up a window of opportunity for van Dijk to make something happen in the attack. Cathcart will help Watford in their clash with Burnley. He has been performing very well recently and if he can keep up the tempo, we can expect some points from him as well. The last defender, Digne will meet with Norwich, who have some defensive issues and seeing how Digne does not shy away from helping his team in the attack it would be safe to assume he can at least produce an assist for Everton, as he did against Tottenham.

We have got five midfielders in our lineup here. El Ghazi and Grealish will meet with Newcastle in what could be a very promising match for Aston Villa and their attack. El Ghazi failed to impress in recent rounds, but we are confident he will find his form sooner or later and start producing goals and/or assists for his team. Grealish on the other side is still questionable to appear in this round, which does cast some doubt on his performance. That said, we will keep him in the lineup as he has proven before he can do some serious damage. Mount is our third midfielder, and while Chelsea are facing Man City, it’s safe to say the Sky Blues have not been as strong as many had expected. We might see goals on both sides, and should Chelsea score, we can be sure Mount will contribute something. Mane is our fourth and last midfielder. He has been phenomenal lately and there is no reason not to include him in this GW. Due to his solid form, we have decided to give him the captain armband as we believe he can net us some nice points this weekend.

Three strikers in our lineup for this game week. Aguero, Ings and Abraham. Ings scored his sixth goal against Everton last round and will look to score some more against Arsenal, who have been struggling this season. It won’t be an easy fixture for Southampton, but seeing how Arsenal’s defence is not nearly as solid as it should be, Ings will surely have a handful of opportunities to contribute something. Abraham has a tough match against Man City ahead of him, however, as stated before, we can trust this one to be an exciting match with some goals on display. City conceded three goals last round against Liverpool and even suffered a goal against Southampton a week prior, which leads us to believe Chelsea will have a solid chance to score a goal as well. And should that happen, we can trust Abraham to be involved. Aguero is our third and final striker who has not been too deadly recently, but we have not lost hope in him. After scoring only one goal in his last six, he will surely look to redeem himself.

In our substitutions, we have got Ryan, Otamendi, Cantwell, and Coleman.

With that, we conclude our preview for GW13, where we introduced our starting XI and shared our thoughts about how do we feel like the next game week will turn out. The biggest question mark ahead of the next game week is above the Man City versus Chelsea bout, where we are continuing to see some goals. We are well aware we might be taking a huge risk here, but we also feel like that risk just might pay off. Other than that, we are confident Liverpool will deliver against Crystal Palace and that Aston Villa will do some damage against Newcastle. While we do not know for sure whether Mane, van Dijk, El Ghazi and Grealish will be involved in any goalscoring, we will hope that will be the case.