EPL Fantasy Tips for Gameweek 10 is here. They say time flies, and it surely does, seeing how we are already entering round 10 of English Premier League on Friday night, with a fixture between Southampton and Leicester, who are coming into the match from the completely opposite sides of the table. And while we can hope for an exciting weekend of football, our biggest wish is of course for our fantasy team to improve upon last round, when we earned barely 29 points. Is this the round where we set a new record for points, or will we fall deeper into the hole is anyone’s guess, so let’s not waste time on guessing what might happen and look over our Fantasy EPL team and tips which will head into GW 10. 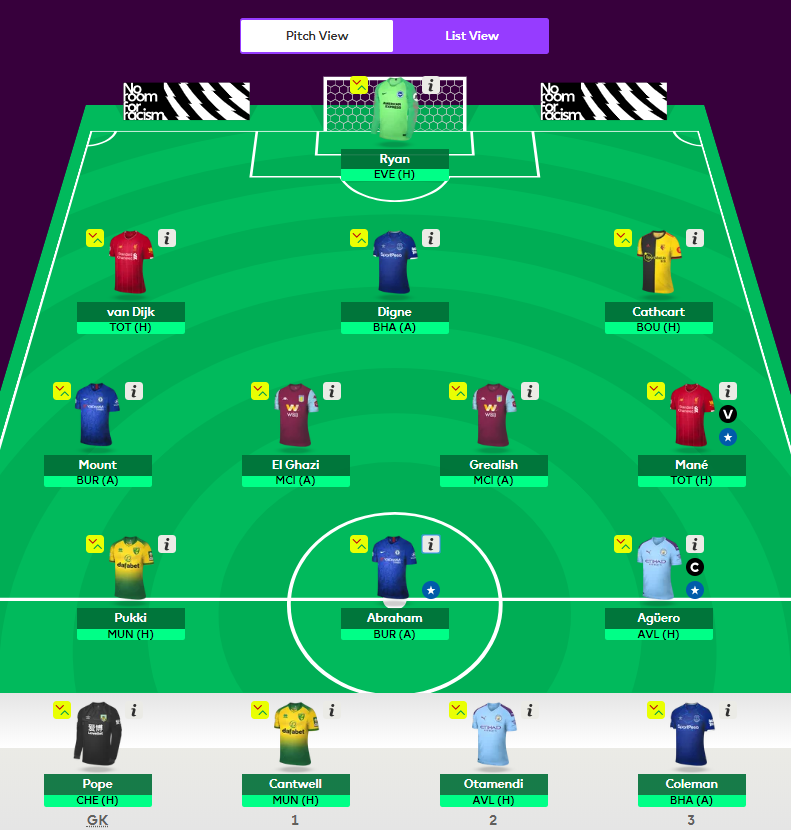 In our goalkeeper department, the choice between Ryan and Pope is quite easy, considering Brighton are facing Everton, whereas Burnley are matched with Chelsea. As you might have guessed it, we will side with Ryan here, seeing how he is facing Everton, who sometimes lack the firepower and we would not be surprised if Brighton win this one.

In the defence, we will have van Dijk, Digne and Cathcart representing our team. Van Dijk will have a tough match against Tottenham ahead of him, where Liverpool will have to be on top of their game to win. While Tottenham failed to impress so far this season, there was a clear sign that they have started to slowly improve with their dominant win in Round 3 of the UEFA Champions League. Will Spurs manage to transfer the good form into EPL is yet to be seen, nonetheless, we will once again trust van Dijk here to deliver. Next to him we have Digne, who played well last round and we expect him to produce something against Brighton as well. The match could be a close one, seeing how Everton have their moments when they fall flat. That said, we believe Everton’s defence is solid enough to keep their goal untouched. Last but not least, we have Cathcart from Watford, who will host Bournemouth.

We have replaced Neves in our midfield and brought in Grealish, who continues to improve as a very solid midfielder. In the last four gameweeks, he topped the league for the most chances created, and his set-piece responsibility does no do any harm to that. What we like about him even more ahead of gameweek 10 is that there are only two teams in the EPL who conceded more goals from a dead-ball situation that Man City, who are Aston Villa’s next opponents. Joining him in the midfield, we once again welcome El Ghazi, joined by Mount and Mane.

Mane remains our main man in the midfield, and we believe this gameweek will be the one where he will shine. The match against Tottenham will by no means be a walk in the park, however, it’s easy to see Liverpool performed much better compared to Tottenham so far, especially in the defensive end, which leads us to believe Mane will have his fair share of chances to make something happen. Mount on the other side will see the Blues travel to Burnley, which should be a fairly easy match to win for Chelsea and we will hope Mount will contribute to that.

Not many changes took place in our attacking lineup. In fact, there were no changes at all. Pukki, Abraham and Aguero will remain our three strikers for this gameweek. We have not yet lost hope in Pukki, simply because he is putting up some solid numbers, yet he, unfortunately, fails to find the net. If he can keep up the tempo it’s only a matter of time before he starts to produce goals once more and we will hope that will happen this gameweek, when Norwich get visited by Manchester United. Abraham failed to score a goal last gameweek, yet there is a strong chance that will change this round when Chelsea take a visit to Burnley. Abraham has some solid numbers and he will surely capitalize on them this round. It’s worth noting the Chelsea striker scored a goal in each of Chelsea’s last three away games, returning six goals over those matches. The last striker on our team is Aguero, who missed out on the last gameweek’s fixture, seemingly to get ready for the UCL fixture, where he scored two goals against Atalanta. If Aguero can show anything similar here, he is bound to score at least a goal against Aston Villa, which is also why he will remain our captain for this gameweek as well.

In our substitutions, we have got Pope, Cantwell, Otamendi, and Coleman.

With that, we come to the end of our EPL Fantasy preview. Looking at our team, it’s easy to see why we are full of optimism ahead of the next round, yet there are two big questions. Can Aston Villa deliver in the attacking end against Man City and will Pukki finally find his form. While we can only speculate at this point, we will hope the answer to both questions is yes, which would boost our results for gameweek 10, something we desperately need after a poor finish in the previous round.