Round 10 of LaLiga has come to a close and with it a rather shocking change in the standings, where we have a new leader. That said, the long-awaited El Classico, unfortunately, did not take place this round as it was postponed to a later date, due to fiery protests in Catalonia.

Granada FC proved to be a very welcomed surprise this season, and at the same time very shocking surprise, to say the least. The Nasrids just recently returned back to LaLiga, and have already left a mark with their incredible performances. They did the unthinkable and found their way into the top part of the league, where they managed to stay since round four. While incredible feat on its own, Granada went on to claim the first spot in LaLiga last weekend with a close win against Betis (1:0), which marked their sixth win of the season.

Looking back at the said fixture, the two teams failed to impress in the first half, as there were no goals on display. Instead, we got to see five yellow cards, only proving it was a rather psychical fixture. That said, Granada managed to find their way to Betis’ goal in 61st minute when Fernandez made a spectacular pass into the box, where he found Vadillo, who scored his second goal of the season. Betis pushed back with a couple of promising attacks, but to no avail. In fact, it was Granada, who came the closest to scoring a goal but unfortunately, they hit the post. Match ended with a minimal win for Granada, who struggled in the ball possession department (36-64) but proved to be far more dangerous in the attack (3/13 – 0/12). A deserved win for the new league leaders, who will hope they can keep the momentum going.

El Classico, the most heavily anticipated fixture of the season in LaLiga, unfortunately, did not see the light of the day this weekend, due to ongoing protests in Catalonia, which resulted in the fixture to be postponed for later. The match between Barcelona and Real Madrid was supposed to be played on October 26, 2019, was postponed due to safety fears. The Royal Spanish Football Federation (RFEF) confirmed that “El Clasico” will be played on 18th December after Barcelona refused to play that match at Madrid’s Santiago Bernabeu stadium.

With that unfortunate incident, Barcelona and Real Madrid will be the only two teams heading into round 11 with only nine matches to their name. As mentioned above, this also means Barcelona lost their number one spot in LaLiga to Granada, who sit one point above the Blaugrana and will look to keep it this way as long as possible. Real Madrid on the other side sit sixth in the league with 18 points, meaning they are one point behind Barcelona and two points behind Granada, with one match in hand.

Atl. Madrid on the rise

After failing to impress with three consecutive draws in LaLiga against Real Madrid (0:0), Valladolid (0:0) and Valencia (1:1), Atl. Madrid finally managed to break out of the shell and won their fifth LaLiga fixture of the season last weekend, when they took down Ath Bilbao.

The fixture was expected to be fairly one-sided, and it proved to be just that. Atletico Madrid scored an early goal in 28 minutes and added another in 64th to make it 2:0. While the match did end in favour of the hosts, Bilbao had their fair share of chances to take the lead. Most notable of which was an early corner kick, which almost resulted in a goal for the visitors. Unfortunately for Bilbao, it was Oblak’s night to shine. Atl Madrid’s goalkeeper was just phenomenal and kept out all shots made from the visitors, leaving them empty-handed. 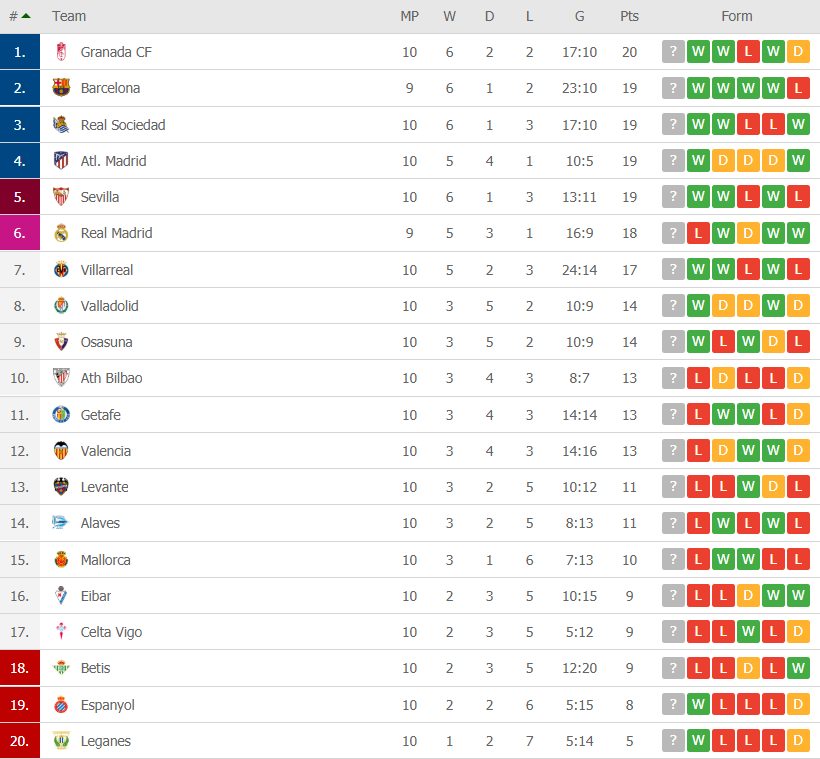 With El Classico postponed, Atletico Madrid finding their form and Granada keeping the pressure on LaLiga giants, we have got some interesting changes in the standings, which unveiled Granada FC as the new league leaders with 6-2-2 record and 20 points. Barcelona are sitting one point behind with 6-1-2 record and 19 points, meaning Blaugrana are tied with Real Sociedad, Atl. Madrid and Sevilla in second place. Real Madrid are sitting sixth with a 5-3-1 record and 18 points. Seeing how there are only two points separating the top six teams in the league, it’s safe to say 2019/20 season of LaLiga is closer than many would have expected. On top of that, there is most likely no one who would have imagined Granada on the top of the league, however, there is still one burning question that needs answering. Can Granada keep up the pace and possibly even contest the title or will they fall flat under the pressure of expectations put on them?