Another weekend has passed, meaning it’s once again time to turn our focus to our EPL fantasy team, the adventures it went through and in the end the final result our roster has produced. But, as always, the first order of business is the dream team of GW 9. If you didn’t check the Premier League recap and what we’ve seen in the GW 9, you can read it in our previous article. 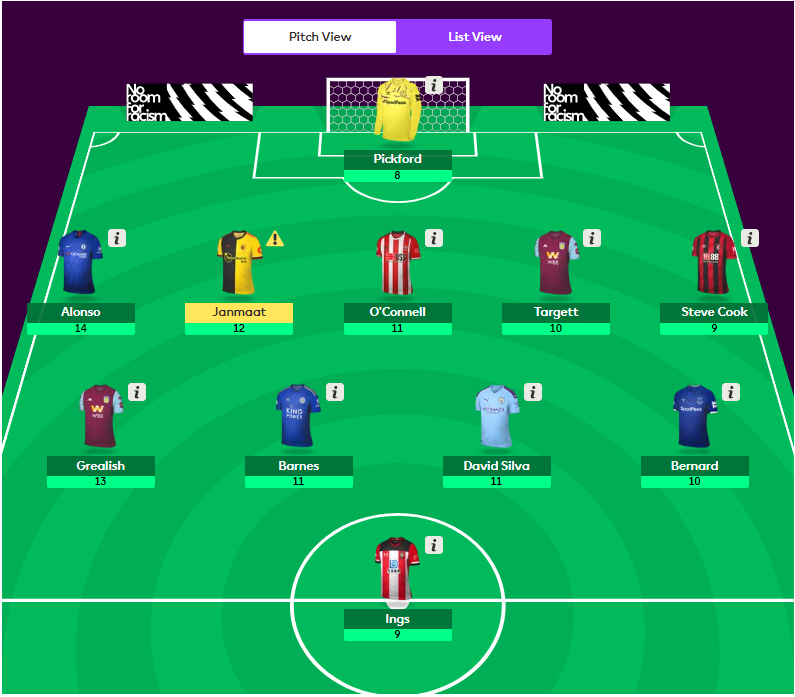 Everton’s goalkeeper Pickford (8) ended the ninth round of EPL with eight points, making him the most successful goalkeeper of the gameweek. Joining him in the back, we have Alonso (14), Janmaat (12), O’Connell (11), Targett (10) and Steve Cook (9). Alonso came out of gameweek nine with an impressive 14 points, which he earned with a superb display of skill in a fixture against Newcastle, which Chelsea won 1:0. Surprisingly enough it was Alonso who scored the first and only goal of the match for his team, and deservingly found his way into the dream team. Janmaat, while failing to score a goal in Watford’s clash with Tottenham, did contribute an assist in 70 minutes he played. Janmaat earned 12 points this gameweek, which is an upgrade from his nine points last week and is his record for this season. O’Connell was just as impressive with an assist which resulted in the only goal for Sheffield Utd in their meeting with Arsenal. Targett finished the GW9 with 10 points which he earned with a goal against Birmingham. Steve Cook earned nine points with a solid performance against Norwich, which is also his season-high in fantasy points.

Four midfielders in the dream team this week, with Grealish (13), Barnes (11), David Silva (11) and Bernard (10) all claiming double digits. Grealish earned 13 with a goal and an assist against Birmingham, Barnes earned 11 with two assists for Leicester against Burnley, David Silva scored a goal against Crystal Palace and earned 11 points, whereas Bernard earned 10 with a goal against West Ham. That leaves us with only one player in the attack, and that player is Ings (9), who scored a goal against Wolves in what was his fourth goal of the season and tied-most fantasy points (9 points).

With the dreamteam covered, let’s look at our EPL fantasy team and how it performed in GW9. 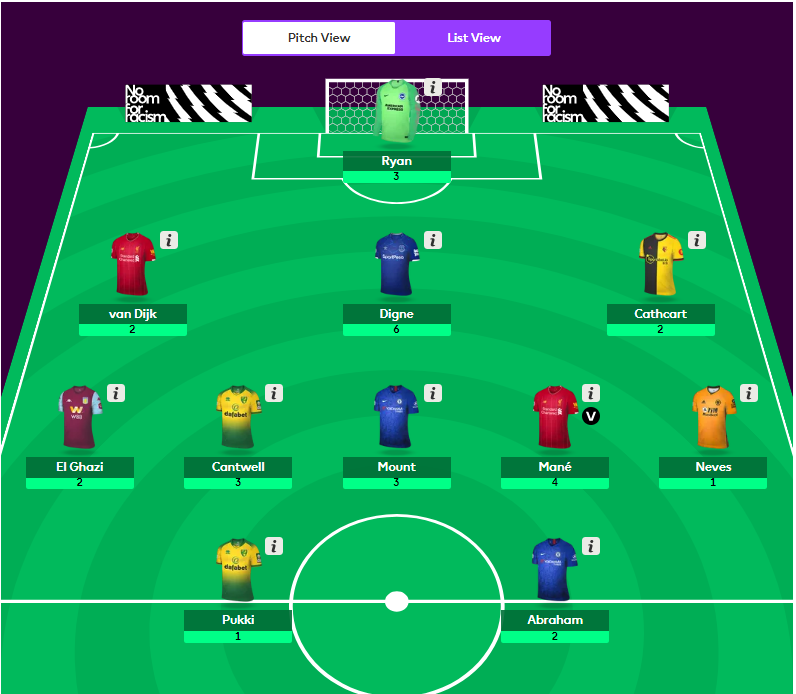 Our new addition to the team, Matthew Ryan (3) ended the gameweek nine with three points, which he earned in Brighton’s clash Aston Villa. Ryan failed to keep a clean sheet, however, we did expect that to happen. That being said, we decided to avoid picking Pope for the job and seeing how Pope earned barely one point this gameweek, we can at least be happy we picked the better goalkeeper of the two.

Van Dijk (2), Digne (6) and Cathcart (2) earned a total of 10 points this gameweek. It’s worth noting Cathcart replaced Otamendi in our team, seeing how the Man City defender did not play last match.

Van Dijk was involved in an exciting 1:1 draw with Manchester United, which marked the end of the perfect run for Klopp’s men who are now holding onto a 8-1-0 record. Van Dijk ended the gameweek with two points, which is far from perfect, however, it’s still better than nothing. Cathcart, who acted as our replacement for Otamendi, earned the exact same amount of points than van Dijk, with his performance against Tottenham. Last but not least, we have Digne, who impressed with what he has shown against West Ham this weekend, where his team came out ahead (2:0). Digne earned six points, which is a rather huge improvement compared to his last four gameweeks.

Just like in our defensive line-up, there was a replacement in the midfield as well, only here it was Neves who jumped in as a replacement for Aguero, who skipped the weekend clash with Crystal Palace.

Our top-performing midfielder was Mane (2), who came out of the gameweek nine with four (doubled) points. Mount (3) and Cantwell (3) finished with three points, El Ghazi (2) with two and Neves (1) with only one. In total, our midfield produced an underwhelming 13 points, with no player scoring a goal, nor contributing an assist. It also should not come off as a surprise this was one of the worst results from our midfield to date, especially considering, we had five players in the position.

Because Aguero was not involved in the Man City’s fixture against Crystal Palace, we were left with Pukki (1) and Abraham (2) as our two strikers, who, just like our midfield, failed to impress. Pukki ended the match against Bournemouth with one point, once again failing to score a goal for his team. This week also marked Pukki’s fourth week in a row without a single goal scored and while there is always hope he will bounce back and start scoring like at the start of the season, that hope is slowly but surely fading away. Abraham, who we have just recently added to our team also failed to score a goal, resulting in only two points to his name. Chelsea did manage to defeat Newcastle this weekend, but, as mentioned above, it was Chelsea’s defender who scored the only goal for the Blues. In total, our attack combined three points, which is just another underwhelming result.

Weeks like that will come, we knew that from the start, but once they do, it’s hard to find the right words to describe the situation. Yes, claiming only 29 points is painful, but we have come to peace, it’s impossible to perform extremely well in each game week. If we take a look at the average points of GW9 which was 39, it’s not bad. In our eyes, there was not a lot wrong with our team in terms of what we have put up to compete this gameweek. That being said, the unfortunate results played a huge part in our… less than impressive end result.

There are no big changes in the FootballTalk.org fantasy league. Buggebakken City is still at the top with 50 points more than the second Gnagy. Party Fetus produced 55 points in the GW9 and joined the Top 3 teams. 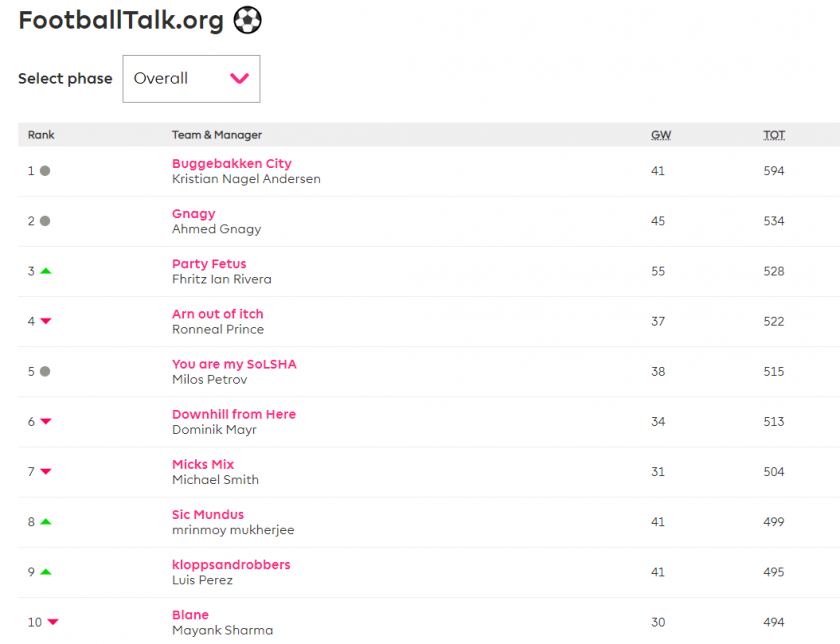 For two days we can expect gameweek 10 and a lot of interesting Premier League matches. We all believe the next round will be better than this one. You can expect EPL Fantasy Tips for GW10 tomorrow.