Going into the game Barca had high hopes given on the back of their great performance against Napoli. No one would have predicted such a scoreline as the contest was expected to a close one.

However, the Bavarians completely exposed the Catalans in all aspects. The failure of their big money signings to their ineffectiveness if Lionel Messi is not playing well. This could have been the worst possible ending to a season where they have failed to win a single trophy and arch-rivals Real Madrid managed to muscle out the La Liga title from them as well.

A defeat would still have been easy to swallow but a defeat by such a staggering margin is absolutely shocking. 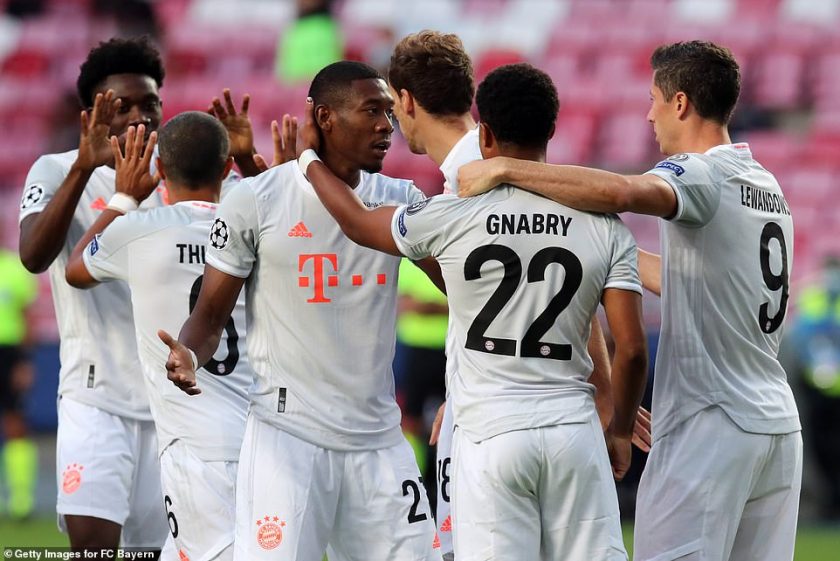 Bayern Munich were completely ruthless and now they are clearly the favourites to win the competition. Bayern had six different goal scorers while Phillie Coutinho on loan from Barca scored twice against his parent club. Many thought the Bavarians were being arrogant before the game but they backed their talk with an unforgettable humiliation of Barca in this 8-2 victory.

The game was highly anticipated one and the early minutes of the game did not disappoint. Bayern scored early through Thomas Muller after an Ivan Perisic cross found Muller and he passed it to Lewandoski who managed to set up Muller. However, Bayern’s lead only lasted three minutes after a Jordi Alba cross was turned in by David Alaba in his own net.

Barca tried to play from the back but never looked comfortable when Bayern pressed them. Despite this Barca, created better chances after that goal. Suarez failed to give Barca a lead when he was one on one with Neuer, while Messi cross was not turned in by any Barca player as it hit the post. In the 21st minute Barca gave the ball away in the midfield and Gnabry was quick to lash onto it and his pass found the overlapping run of Perisic who scored with his left foot to make it 2-1. 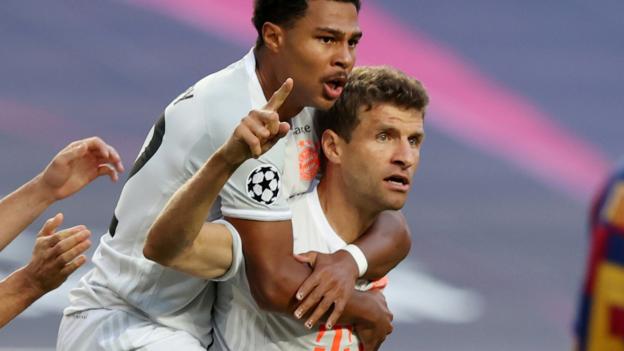 The Bavarians added another one in the 27th minute when Lewandoksi flicked a ball for Gnabry as Clément Lenglet failed to deal with the German who scored the third goal. Bayern’s top scorer Lewandoski had a great chance to make it four-one after Bayern pressed Barca and Busquests gave the ball away but surprisingly he missed as he was denied by Ter Stegen. However two minutes later his teammate Thomas Muller made up for it as he converted a low cross from Kimmich to make it 4-1. After that goal Barca looked completely hopeless, they could not deal with Bayern’s pressing and only managed to create two half-chances which were very comfortable for Neuer.

Quique Setién sends Antoine Griezmann to add more firepower in a bid to make a comeback. Things started to look good for Barca after a Jordi Alba pass found Suarez and he managed to go pass Boetang and score past Neuer to make it 4-2 on the night. However, their joy only lasted five minutes with Bayern scoring their fifth. Alphonso Davies completely bamboozled Barca’s right-back Nelson Semedo and went past him to find Joshua Kimmich to make to 5-2 on the night. Robert Lewandoski was again on the score sheet for Bayern. Philippe Coutinho who is ironically on loan from Barca managed to escape from Vidal and Semedo and found the Polish striker free, who headed the ball in for a sixth against a helpless Ter Stegen. To further add to the misery for the Catalans Phillipe Coutinho scored Bayern’s seventh goal. Thomas Muller was in again of space with Barca defence being so unorganised he passed the ball to the Brazilian who scored the seventh goal. In the 88th minute, Lucas Hernandez found space on the left-wing and his run was spotted by former Barca player Thiago, Hernandez passed the ball to Coutinho was scored a brace and Bayern’s eight on the night.

Despite this incredible win Hansi Flick urged his team to stay close to the ground and focus on the job at hand.

He said: “Of course we are delighted with the way in which we have achieved this 8:2. But we all know – and you could feel it in the cabin – that we still have a lot to do. We know how fast that can happen in football. It is important to look ahead to the next game.”

The Bavarians will now take on the winner between Manchester City and Lyon in the semi-final.

While his counterpart Quique Setien was questioned about his future as he has been under a lot of pressure despite the fact he was only appointed in January. He has refused to quit the club after this humiliating defeat and insisted that his future at the club is in the hand of the Barca board.

He said: “I think that right now it’s too soon to be talking about whether I stay at the club or not. It doesn’t depend on me. The reality is that it doesn’t depend on me. It’s worth all of us working out what’s important and considering a wide range of things which correspond to a defeat of this importance and which is so painful. There needs to be a wider reflection, taking into account the situation and the importance of this defeat which is so painful”.

The Bavarians equalled that record in just a single game. The Catalans lost by six goals for the first time in their history after 1951 when they lost to Espanyol in 1951 by 6-0 (Source: OptaJoe).