Brazilians were unforgiving of Korea’s defensive disorganisation and confirmed their overwhelming favouritism. 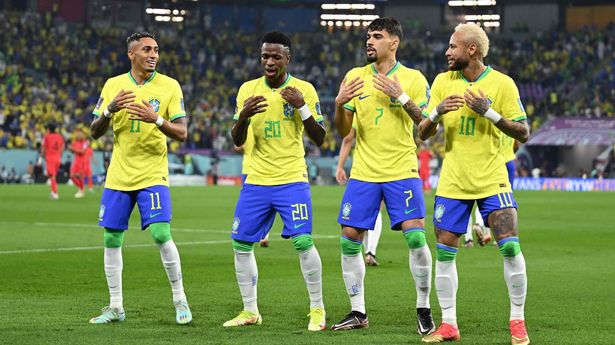 In the most technically unbalanced match of the round of 16 at the World Cup, Brazil put in a spectacular performance against South Korea to secure qualification after just 30 minutes of play.

With only 12 minutes, Raphinha won the race against the marking and crossed backwards finding Vinícius Júnior, with the freedom to open the scoring. Three minutes later, Richarlison suffered a penalty and Neymar scored the second goal.

In the third goal, Richarlison did a great move, played for Marquinhos to Thiago Silva deliver to Richarlison receive back, completing an amazing collective goal. In the end, Vinícius Júnior received from Neymar on the left and crossed for Lucas Paquetá to hit it firmly, low, with no chance of defence for the goalkeeper.

In the second half, Brazil adopted a more defensive posture to try to find more goals in the offensive transitions, keeping the same line-up of the first half. In the second half, the South Koreans came back more tactically organised and managed to take the lead through Park Seung-ho’s superb goal, giving their opponents less space and avoiding a bigger defeat.

The first half conveyed above all an extreme confidence for the continuation of manager Tite in this World Cup. The return of Neymar (on the field for 80 minutes) with great physical performance and goal, in addition to the preservation of pending players, ensures favouritism in the quarterfinals.

In addition, Brazil once again showed an impressive capacity to produce attacking moves at speed with tips, making the necessary caveats in relation to the opponent.

South Korea tried not to change their original pattern of play and went into the game looking to occupy the attacking field. However, the tactical disorganization in defensive transitions eliminated any chance of the Koreans threatening the Brazilians.

As a technically superior team, Brazil lived up to expectations by taking advantage of the spaces given up by their opponents. The same could happen to Croatia at key moments in the quarterfinals. It is up to the Brazilians to make the most of it and confirm their favouritism once again.