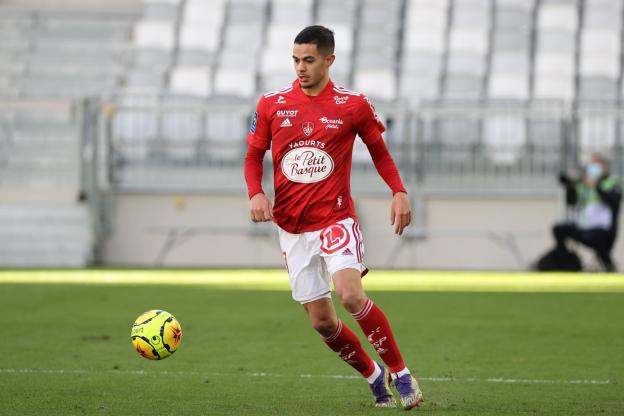 Romain Faivre, 22, has caught the attention with his performances for Stade Brestois, with Ligue 1 giants Paris Saint-Germain reportedly also interested in signing him. Newly-appointed PSG head coach Mauricio Pochettino was able to closely watch the midfielder as he played 90 minutes in Brest’s 3-0 loss at Parc des Princes at the weekend.

A youth product of French club Tours academy, Faivre joined AS Monaco in 2017. He signed his first professional contract with Monaco in 2018 after impressing with the club’s B team. However, the midfielder only managed four appearances for the Monaco first team during his three years at the club.

Due to limited opportunities, the Frenchman left Stade Louis II in the summer for Brest and has excelled since his arrival, scoring four goals and assisting a further three times in 19 Ligue 1 appearances so far this season. The midfielder’s form also saw him being called up to the France Under-21 side last year where he scored two goals in four appearances.

Faivre’s impact at his new club has been so significant that Brest rewarded him with a new contract until 2025.

Things are slowly falling in place for Manchester United after a sluggish start to their campaign. Despite suffering a disappointing exit from the group stages of the Champions League, Ole Gunnar Solskjaer has not let the team’s focus drift away. After a highly productive winter schedule, the Red Devils have established themselves as genuine title contenders.

One of the players who has been in good form of late is Paul Pogba. The Frenchman seems to have put behind his injury problems that literally ruined the majority of 2019/20 campaign. Despite United getting closer to a first league title since Sir Alex Ferguson’s retirement, he is reportedly determined to leave the club in the summer.

Solskjaer cannot risk keeping an unhappy player in his squad and must sanction Pogba’s sale at the end of the season, with European heavyweights such as Real Madrid, Juventus and PSG all reportedly interested in the coveted midfielder’s signature.

Should the France international leave, it would create a huge void in United’s midfield. While the Red Devils do have a good reserve of central midfield players, none come close to Pogba’s ability. A swoop for Faivre, to that end, would make sense, even though he will not be a like-for-like replacement for Pogba.

Faivre could be a good addition to Man United’s midfield

Faivre’s versatility should hugely appeal Solskjaer as he has been used on both flanks in midfield, as a winger, in the central midfield and even as a striker at Brest. The France Under-21 international understandably fits the bill as a good long-term signing and would add strength to United’s midfield department.

A talented player with the ability to chip in with goals and assists, Faivre could be a very exciting signing for Solskjaer’s United if they decide to pursue him.