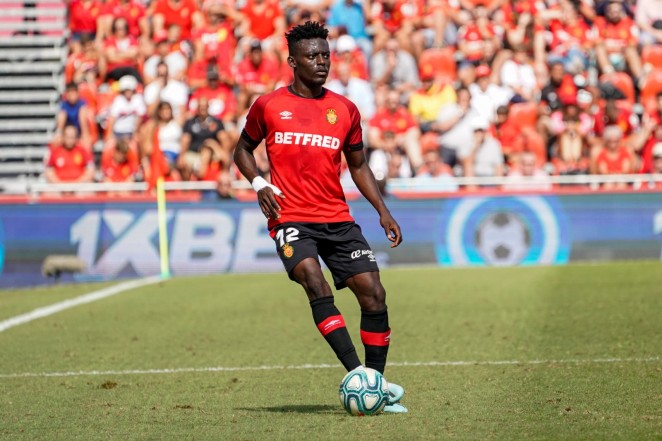 Iddrisu Baba, 25, joined Mallorca’s youth system in January 2014 from CD Leganes and has gone on to make 105 senior appearances for the club, registering a goal and an assist in the process. During his time at Son Moix, he has helped the Palma-based club gain promotion to LaLiga on two occasions.

The five-cap Ghanaian international has a contract at Mallorca until 2024 that includes a £38m release clause. However, Everton are reluctant to splash that price for him and instead, they are expected to open with a £10m offer for the midfielder in the mid-season trading period.

On Sunday, the Merseysiders sent scouts to watch Baba in action during Mallorca’s LaLiga game with Cadiz. The Ghanaian went on to score his first-ever LaLiga goal, as Mallorca drew 1-1 at Cadiz.

Rafael Benitez has come under a lot of scrutinies in recent weeks after Everton’s dismal run of form. Everton have dropped down to tenth on the Premier League table following three successive defeats—with the latest coming against Wolverhampton Wanderers at Molineux on Monday.

The Toffees have faded after a bright start to the campaign. Injuries to key players have been a major factor in the Merseyside outfit going off the boil of late.

Abdoulaye Doucoure and Allan had formed a strong partnership in the middle of the park, with the former demonstrating his attacking side of the game with two goals and four assists before suffering a stress response in his foot during the game against West Ham last month.

Doucoure’s injury absence has forced Benitez to chop and change things in order to find a suitable partner for Allan in the Everton engine room. However, neither Jean-Philippe Gbamin nor Tom Davies have proved to be that player in the last two games, where the Toffees have leaked seven goals combined.

To that end, Benitez’s interest in recruiting Mallorca midfielder Iddrisu Baba would go a long way towards sorting out a troublesome issue in a key area of the pitch for Everton.

Iddrisu Baba would be a smart addition to the Toffees squad

A central midfielder by trade, Baba seems to have the qualities in his game to adapt to the fast-paced and robust nature of Premier League football. He has already made over 100 appearances for Mallorca in Span and at 25, the midfielder still has his best years ahead of him.

The Ghanaian international’s passing skills, energy and off the ball work rate coupled with his LaLiga experience could possibly come through the door at Goodison Park as an immediate game-changer. Baba would add quality to Everton’s midfield, whilst improving the depth of the squad.

All in all, if Benitez and co. can sign Baba below his release clause in January, he could prove to be a steal in today’s age and market.