Crystal Palace have opened initial talks with Will Hughes after he turned down signing a new deal with Watford. 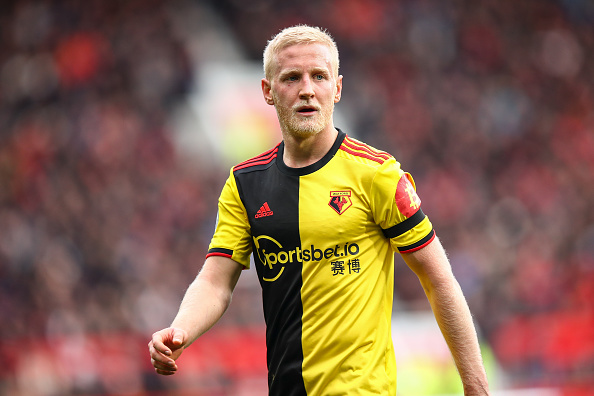 Will Hughes, 26, joined Watford from Derby County back in 2017 and has made close to 120 appearances in all competitions. The midfielder played a crucial role in the Hornets’ promotion to the Premier League under head coach Xisco Munoz, scoring two goals in 30 appearances.

However, the former England under-21 international has entered the final year of his contract at Vicarage Road and has refused to sign a new five-year deal. As a result, Hughes has been frozen out of the first-team plans and is currently training with Watford’s U23s.

Crystal Palace are aware of the 26-year-old midfielder’s situation and are planning to sign him before the transfer window slams shut at the end of the month. The Eagles endured a chastening afternoon against Chelsea at Stamford Bridge in their season opener, losing 3-0 in what was new manager Patrick Vieira’s first game in charge.

Defenders Marc Guehi and Joachim Andersen have arrived at Selhurst Park to reinforce the defensive options, with exciting talent Michael Olise joining from Reading. Conor Gallagher has joined on a season-long loan from Chelsea. Christian Benteke signed a new deal earlier this summer, committing his future at the south London club.

Yet, Patrick Vieira is keen to add to his squad, with a midfielder and two forwards prioritised by the French tactician.

Regardless of bringing in Conor Gallagher, the Eagles still lack quality and depth in the midfield department. The Achilles injury sustained to Eberechi Eze back in May, one of Palace’s best players last season, has further weakened Vieira’s options.

Luka Milivojevic had an underwhelming last campaign, failing to influence games as much as he has done in the past. James McArthur will turn 34 in October and cannot go on forever, while Cheikhou Kouyate has been transformed into a centre-back by former manager Roy Hodgson since last year.

Creativity from the middle of the park is an area of serious weakness for the Eagles and Vieira must find a solution sooner rather than later.

Is Will Hughes the right fit at Selhurst Park?

Watford’s Will Hughes has emerged as the latest addition to Crystal Palace’s shortlist of potential targets. The 26-year-old has progressed by leaps and bounds at Vicarage Road over the past few seasons and the Eagles have every reason to look at him as a player who could offer some much-needed quality and experience in midfield.

A central midfielder by trade, Hughes is more than capable of playing in various roles across the midfield, be it in a double-pivot, a three-man midfield or as a wide playmaker. In terms of his attributes, the Weybridge-born midfielder is good at threading passes in behind the opposition and combining with teammates in the final third of the pitch.

The former Derby County man’s technical abilities combined with his, stamina, drive and determination, and ability to chip in with goals would make him a perfect fit for Vieira’s system at Selhurst Park. Plus, he has good experience playing in the top-flight, having made 77 appearances, in which he has scored five goals and supplied seven assists in the process.

Hughes’ qualities and experience would potentially boost Vieira’s options in the middle of the park. At 26, he is entering his prime and Palace could enjoy his best years if they manage to get him on a cut-price deal from Watford.