Football is a wonderful game, which has found its way into all parts of the world. From the USA, to Australia, Russia and Africa, no matter where you go, you can be left assured there will be kids playing football at the local playground. With the immense popularity of the sport, it’s only reasonable to see tremendous amounts of football teams, which as of today there is no way of knowing exactly how many there are.

Seeing how there are huge amounts of football teams, it’s only normal for some of them to stand out. Some stand out due to incredible successes they had in their history, others stand out due to having some of the world’s best individuals playing in their outfit, and then there are those, who stand out simply due to unique, funny, or just outright weird name they have. In this article, we will look 10 football teams with names that stand out from the rest in one way or another. 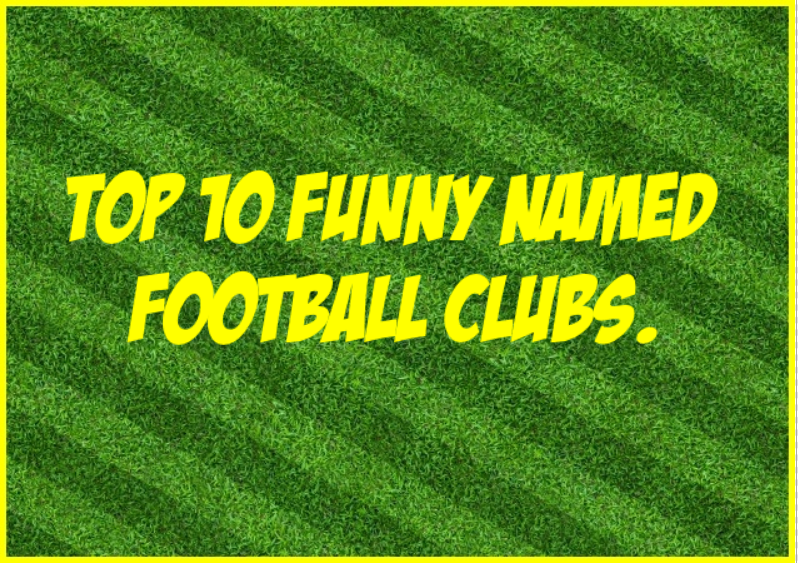 It’s still a mystery how this team decided on its name. It may be due to the fact its original founder really enjoyed his salsa, or maybe he just ran out of the ideas to how to call its club. No matter the cause, in Anguilla, you can find a name called Salsa Ballers F.C., which competes in AFA Senior League, the top tier league of Anguillan football.

This Ethiopian football club has a unique, yet very eye-catching name to say the least, but it was no always like that. Founded in 1976, the club first name was Yebuna Gebeya Sport Club, but decided to rebrand itself as Ethiopian Coffee F.C. in 1983 when it was acquired by the National Coffe Trading Corporation. The club even has a coffee pot in their crest, making it rather obvious they are proud of their name, and who wouldn’t be?

A club that most of us never heard of before, who plays in a country even less people even realised existed. That being said, S.V. Robinhood makes sure their name is easy to remember and widely recognisable. Priding itself with the name dedicated to the heroic outlaw from the English folklore, S.V. Robinhood is a club based in Paramaribo, which competes in SVB Topklasse, the top tier of football in the Republic of Suriname, a country on the north-eastern Atlantic coast of South America.

On top of priding itself with a unique name, S.V. Robinhood are also the most successful team in SVB Topklasse with 24 titles as of 2019.

Having “Invincible Eleven” as your club name is one way of letting everyone know your ambitions and this club from Liberia did just that. Officially known as Union of Invincible Eleven & Majestic Sports Association Inc., this Monrovia based club is best known for being one of the founding members of football in Liberia as well as being the club where the legendary George Weah played between 1986-1987.

Unlike the previously mentioned clubs, BSC Young Boys is one of the more well-known clubs in the football world. This Swiss club does not only pride itself with a unique name but also for being the most successful Swiss club in the international football, having reached the semi-finals of European Cup (now Champions League) in 1958/59.

Adding to our list, we have another Swiss club, which prides itself with having the name of an insect. The origins of the clubs name are shrouded in mystery, and according to FIFA will remain as such, being all the documents or information that would reveal why this Zurich based team decided to name itself as “Grasshoppers” evaporated in the mist of time. That being said, Grasshopper Club Zürich are the most successful team in the Swiss league, with 27 titles, seven more than Basel as of 2019.

This Bolivian football club chose a cocky name, to say the least, however, they more than deserve to be cocky. The Strongest are the oldest active club in Bolivia and the only team to have played in the country’s top division for over a century. That being said, they are only the second-most successful team in Bolivian Primera División, so maybe they are not exactly “the strongest” when it comes to winning the domestic title.

There are many things to love in this world, yet the founders of Løv-Ham Football club seemingly really love ham. Due to the “ø” in their name, the club’s name is basically pronounced “love ham”, and to be fair, there is nothing wrong with that. Unfortunately, the club disbanded in 2011, when they merged with Fyllingen football club to create FK Fyllingsdalen, which competes in the second division of Norwegian football.

As we get deep into our list, there was bound to be a club with an “interesting name”. Deportivo Wanka is a club based high up the Peruvian Andes, named after the local “Wankas” population. While it may be an unordinary name for most of the people, seeing how they are pronounced “vanker”, we must clarify “wanka” in the local language means warrior.

Fotballaget Fart or more commonly known simply as “Fart” is a Norwegian football club based in Vang in Norway. What is even more interesting is that their home ground is known as “Fartbana”, which again for most of the population makes for a very funny name. That being said, “fart” does mean “speed” in the Norwegian language, meaning the teams’ name basically means “the football team speed”. Nonetheless, it won’t fail to make many people grin seeing there is a football team named “fart”.