The French ace suffered a horror injury against Saint Etienne.

Doubts are looming over Kylian Mbappe’s availability for the Champions League after the PSG forward suffered what looked like a nasty injury against Saint Etienne. Les Parisiens squared off against St Etienne in the Coupe de France final, where Mbappe was forced to leave off the field midway following an ugly tackle by Loic Perrin, for which he eventually received a red card. Although PSG were able to lift the trophy, Mbappe’s injury made it less-memorable, with the Champions League quarter-finals on the horizon. The 21-year-old still managed to celebrate with his teammates aided by the crutches.

PSG have now offered an update on Mbappe’s injury, stating that the French World Cup winner has nearly avoided the ligament injury and instead suffered an ankle sprain. It is also understood that the extent of the injury would be evaluated in the coming days. It has now sparked a doubt on Mabppe’s presence for the UCL clash against Atalanta.

Mbappe’s injury comes right after he had dismissed his exit rumours, stating that he wants to succeed with the Les Parisiens. The former Monaco star, also PSG’s second most expensive signing, has been in scintillating form this season as he had bagged 18 goals in Ligue 1 this season, where PSG came out as eventual champions. 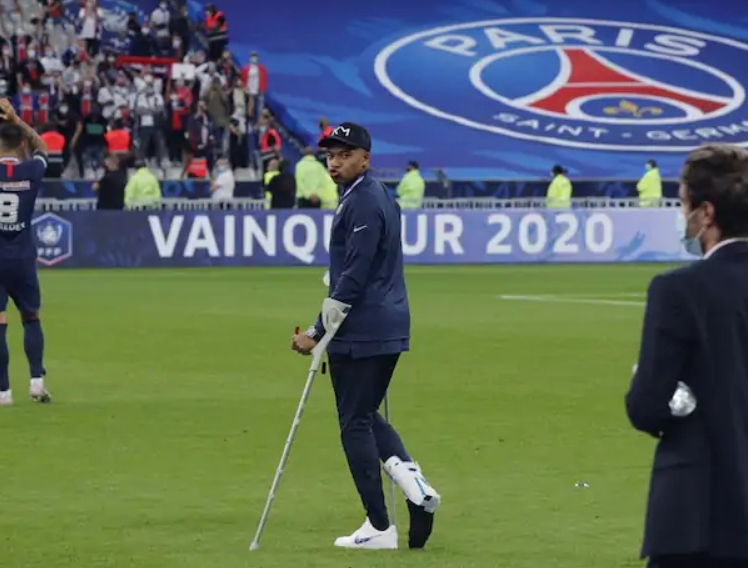 Thomas Tuchel also had his say on Mbappe’s injury post the win. (h/t The Statesman)

“Everyone is worried. Everyone who saw the foul is worried. Of course, I’m worried. We have to be patient because we don’t have any news. I think he will undergo tests tonight.”

Atalanta manager Gian Piero Gasperini, who will be facing PSG in a month, also felt sorry for Mbappe’s injury but stated that PSG would be a tough side nevertheless.

“Mbappe is a great guy, I hope it’s not serious.

“We don’t want to win due to the misfortunes of others.

“If you win against these types of players, your result means even more.”

Gasperini’s men turned out to be the dark horses this season after having impressed in Serie A and the UCL. Having already sealed their place for the next season’s UCL, they still would like to push the boundaries this term – their first-ever UCL journey.

On the other hand, Tuchel’s man will to try to end their bad streak in the continental competitions and are probably eyeing for a treble. Mbappe’s setback might have come at a difficult time, yet PSG boasts an array of top-class forwards like Neymar, Pablo Sarabia, Angel di Maria and Mauro Icardi.