On the January deadline day, Southampton agreed on a short-term loan deal with Liverpool for the transfer of winger Takumi Minamino. 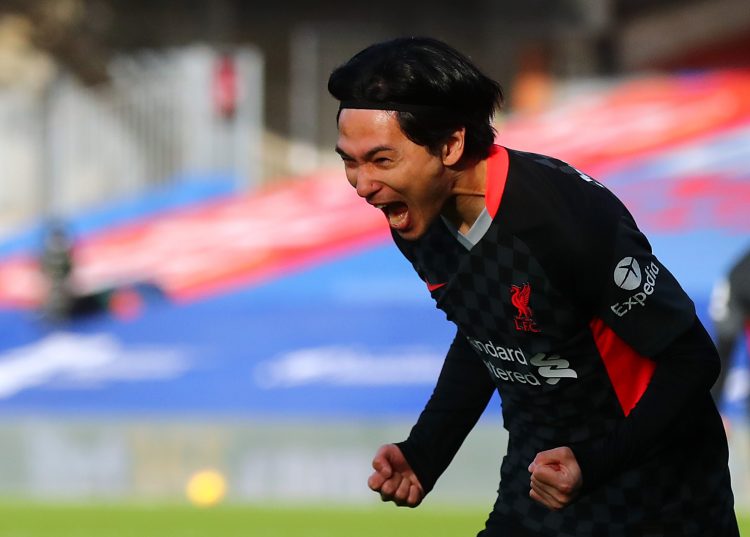 Signed from Red Bull Salzburg in January 2020, Takumi Minamino, 26, has struggled for game time at Liverpool, managing just 31 appearances across all competitions since. Only 12 of those, though, have been starts for the Japanese international, who has failed to make an impression as he would have liked to at Anfield.

The 26-year-old forward agreed to spend the remainder of the season at St. Mary’s on the deadline day in a bid for more game time, having struggled to break into Jürgen Klopp’s plans this season.

A youth product of Cerezo Osaka academy, Minamino broke into the senior team back in 2013 and made 82 appearances across all competitions in three seasons, scoring 15 goals. The Japanese’s performances for Cerezo Osaka didn’t go unnoticed as Red Bull Salzburg came calling for his services and signed him in January 2015.

Minamino won six back-to-back league titles with Red Bull Salzburg, scoring an eye-catching 64 goals in 189 appearances. His record of 11 goals in 39 European appearances for Salzburg is impressive too.

The 26-year-old’s performance in Salzburg’s 4-3 defeat to Liverpool at Anfield in the Champions League group stage in October 2019 was one of the highlights of his time with the Austrian outfit. He was among the goalscorers for Salzburg but Jurgen Klopp’s Reds snatched a victory through Mohamed Salah’s 69th-minute goal.

Southampton’s start to the 2020/21 campaign did raise a lot of eyebrows as they spent several weeks in and around the top four spots. They did lose their first two Premier League games to Crystal Palace and Tottenham respectively but won the next seven out of their 11 games.

However, the Saints have suffered a massive dip in form of late, registering just one win in their last eight league games. On Tuesday, Ralph Hasenhuttl’s nine men were brutally put to the sword by Manchester United, who won 9-0 at Old Trafford. This marked the south coast club’s worst defeat in the league’s history for the second consecutive season.

Southampton’s injury woes and fitness have been well documented this season, thanks to Hasenhuttl’s high-octane and heavy metal football. Theo Walcott, Ibrahima Diallo and Oriol Romeu sustained injuries in the 1-0 defeat to Aston Villa over the weekend, while Alexandre Jankewitz and Jan Bednarek were sent off in the 9-0 thrashing at the hands of Manchester United.

Injuries have disrupted the Saints’ season, with Hasenhuttl’s side now struggling to score goals. Failure to find the back of the net in six of the last eight league fixtures speaks volumes about Southampton’s lack of cutting edge.

Danny Ings and Che Adams have both contributed to 11 goals and seven assists this season but the Saints haven’t found a reliable source of goals apart from the duo. Theo Walcott, Moussa Djenepo and Nathan Redmond have managed just four goals amongst them in 42 appearances so far, which is a paltry return.

With youngsters Nathan Tella and Michael Obafemi both ruled out due to injuries and Shane Long farmed out on loan to Bournemouth, Minamino’s arrival on loan until the end of the season would be valuable for Southampton.

Minamino struggled for game time behind the fiery front three of Mohamed Salah, Roberto Firmino and Sadio Mane, but he can thrive in Hasenhuttl’s system at St. Mary’s. The 26-year-old’s versatility means he will give Southampton an option out wide and in attacking midfield. He will not only improve the south coast club’s attacking options but also add much-needed depth to Hasenhuttl’s side that is currently crippled with injuries.

At St. Mary’s, the Japanese international would get regular opportunities that’ll help him get back his lost mojo. Minamino has a great opportunity to prove his doubters wrong and if he can hit the ground running under Hasenhuttl, he could make a big difference in the Saints’ 2020/21 campaign.