Round 18 of English Premier League came to a close this Sunday, December 22, unveiling some intriguing results and quite a few unfortunate ones. Nonetheless, it was an exciting week of EPL fixtures, featuring some of the strongest teams in the league clashing against each other.

Unfortunately, Liverpool were not involved in this week’s action as they had to attend their FIFA Club World Cup obligations in Qatar, where the edged past Flamengo RJ to win their first FIFA Club World Cup title and become the second English team to achieve that feat after Manchester United who bested Estudiantes in 2009 in Japan. That being said, let’s look over what the remaining English teams produced last weekend.

It was one of the most heavily anticipated fixtures of the week, featuring Manchester City and Leicester, who met this Saturday at Etihad Stadium. The said fixture was one of the toughest test for Leicester and their ambition to catch up to Liverpool, who are sitting 10 points ahead of the Foxes. While many consider Liverpool as champions of 2019/20 EPL, there was still some hope for Leicester to catch up to them. Those ambitions have now taken a major hit, as Leicester dropped three crucial points in their climb to the top.

In the match between two EPL juggernauts, Leicester got off to a flying start as they scored the game opener only 22 minutes in with the help of Vardy and Barnes, who passed for the goal. Unfortunately, the Foxes suffered an equalizer only eight minutes later at the feet of Mahrez. At that point, Manchester City took over the match, held onto 63% ball possession, which they used to produce an impressive 23 goal attempts and 12 shots on goal, while Leicester managed to shoot the ball with only 2/5 with 37% ball possession. With their pressure, Man City managed to score their second in 43rd minute, when Gundogan converted a penalty and with that secured his team a 2:1 lead ahead of the second half.

The second half was not much different in terms of which side showed more. Man City ended the second half with 57% ball possession and shot the ball 5/10, while Leicester struggled to produce a single shot on goal with 43% ball possession. Man City scored their third goal of the match in 69th minute to get themselves in a two-goal lead. Leicester, despite their best efforts, failed to respond with a goal of their own as they had to admit defeat too far superior Manchester City, who delivered them with a massive blow to their EPL title ambitions.

After seemingly finding their form, Manchester United decided to put up another disappointing performance last round where they lost 0:2 against Watford, who produced one of the biggest upset wins of the season.

The match was played at Vicarage Road, which was expected to give Watford a fighting chance, yet no one expected them to deliver and defeat Manchester United. The Red Devils were unbeaten across all competitions since late November, where they lost to FC Astana in the Europa League and were holding onto a 3-2-0 record in their last five league fixtures. Suffice to say, they arrived at Vicarage Road confident they can walk away with all three points, yet they failed to deliver on their expectations.

In the first half, neither team managed to impress, seeing how there were no shots on goal from either side. Manchester United ended the first half with 57% ball possession and four-goal attempts, while Watford produced three goal attempts with 43% ball possession. At this point it seemed like Watford will be a much tougher opponent than what Man United expected and as soon as the second half took off, their fears came true. Watford scored the game opener in the 50th minute and added their second only four minutes later via a penalty kick. Manchester United tried to respond and took over the match, held the ball at their feet for 71% of the time and shot the ball 8/13. Despite their best efforts, however, United fell flat as they were unable to find a way to score.

The match ended with a shocking 2:0 win for Watford, who despite this win, remain at the bottom of the league. Manchester United proved to be the better team looking solely at the numbers, as they had 64% ball possession, 17 goal attempts and eight shots on goal. Watford on the other side shot the ball 3/11 with 36% ball possession. Unfortunately, even that was not enough to defeat the worst team in the league and seeing how United failed to win here, it does cause some serious concern about their overall quality.

Chelsea and Tottenham met on Sunday at Tottenham Hotspur Stadium in what proved to be an exciting match, where Chelsea outperformed themselves and handed Mourinho his first EPL defeat since he took over the Lillywhites. The match was fairly one-sided from the start, with Chelsea proving to be the stronger team. The Blues scored their first in 12th minute and added another in the stoppage time (45’+4) to enter the second half two goals up.

Tottenham failed to respond in the opening minutes of the second half and suffered a huge blow in 62nd minute, when Son got sent off due to unsportsmanlike conduct, leaving his team with only 10 men to finish the job. Suffice to say, Tottenham failed to come back from being two goals down and had to admit defeat to Chelsea who managed to break their two-game losing streak and have now cemented themselves as one of the top four teams in EPL. 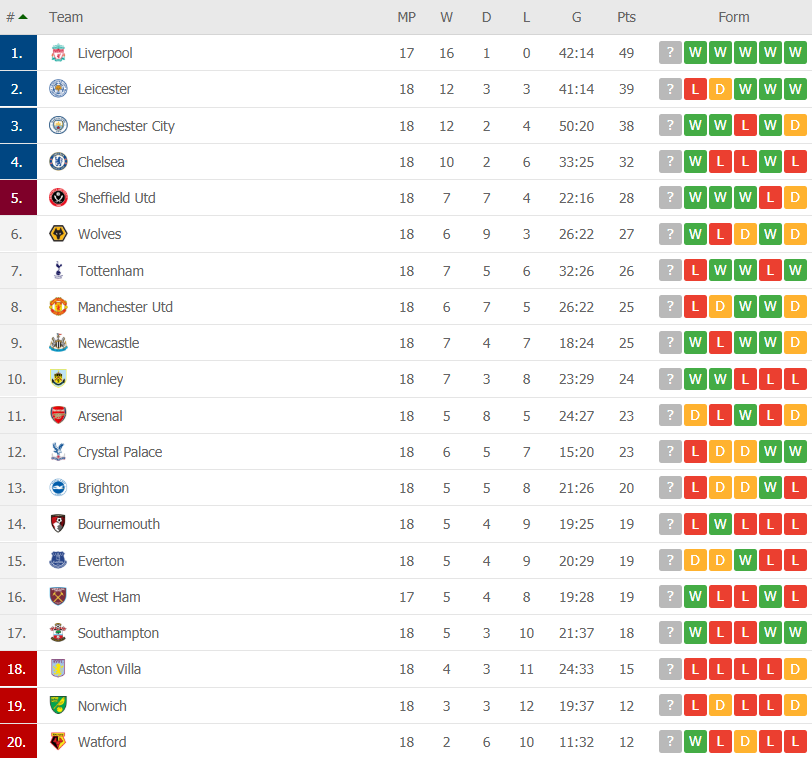