Late heroics from Eddie Nketiah handed Arsenal a thrilling comeback 3-2 win over Manchester United at the Emirates Stadium on Sunday. 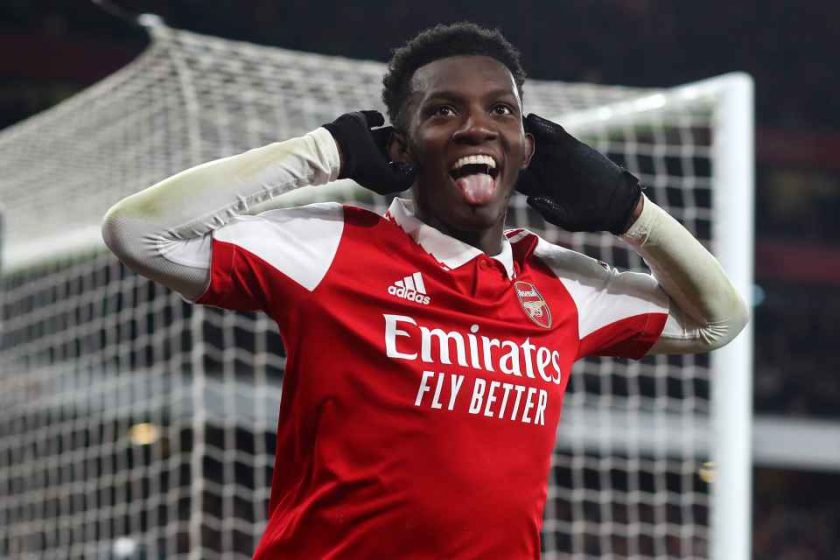 Having taken the lead through Marcus Rashford, the two teams went into the break at 1-1 thanks to Eddie Nketiah’s equaliser. An action-packed second half saw Bukayo Saka give the Gunners the lead before a flying Lisandro Martinez header levelled things up for Erik ten Hag’s side. However, it was Nketiah’s stoppage-time goal that sealed the deal for the hosts and sent the Emirates faithful into raptures.

That said, here are the four things we learned from Arsenal’s win over Manchester United in the Premier League.

Arsenal banished lingering doubts over their title pedigree with a magnificent 3-2 victory against an improving Manchester United side on Sunday. The win put them five points clear of Manchester City with a game in hand, but it was more about how Mikel Arteta’s side bagged those three crucial points at home.

Man City’s comfortable 3-0 win over Wolves earlier on the day meant that Arsenal could feel the defending champions breathing down their neck. And despite Marcus Rashford opening the scoring for the visitors with a stunning low drive, they didn’t wilt and responded emphatically.

As the game was heading to a stalemate, Nketiah’s stoppage-time winner demonstrated the Gunners’ other side to their character that answered so many questions over their title pedigree in recent weeks.

Eddie Nketiah has answered his critics in style since coming into the Arsenal side following Gabriel Jesus’ knee injury at the World Cup. Jesus was pivotal to Arsenal’s style of play in the months before the World Cup, but Nketiah has shown his qualities to deputise for him up top.

The 23-year-old has grabbed the opportunities with both hands since the resumption of the Premier League. He continued his fine form on Sunday, scoring two goals to floor Man United and help the Gunners continue their title surge.

While Mikel Arteta would want to see Jesus return swiftly after undergoing knee surgery, Nketiah has done more than enough to show he can be relied upon for goals.

Marcus Rashford put United 1-0 up with a superb low strike past Aaron Ramsdale after 17 minutes. Picking the ball up from Bruno Fernandes on the left, he darted infield, nutmegged Thomas Partey and rifled into the bottom corner, giving Ramsdale no chance to save.

England forward’s goal on Sunday took his tally for the season to 17 goals across all competitions, proving how crucial a component he has become in Ten Hag’s attacking unit. Curiously, it took Rashford eight appearances to score his first goal at the Emirates Stadium.

Coming to the Emirates Stadium to play the league leaders Arsenal without the influential Casemiro was a massive blow, and the absence of the midfield general left a gaping hole in United’s team.

Casemiro was suspended after picking up his fifth booking of the season in the 1-1 draw with Crystal Palace, and in his absence, Erik ten Hag decided to pair Scott McTominay with Christian Eriksen in the middle of the park. The McTominay-Eriksen duo lacked the bite, spatial awareness and reading of the game as Arsenal ran over Man United’s midfield for most of the game.

Casemiro has transformed the Red Devils’ midfield in a few months’ time, and the Brazil international’s composure, calmness and experience were sorely missed against the high-flying Gunners.