Barcelona had a fairly active and fruitful winter window, completing the signings of Ferran Torres, Dani Alves, Adama Traore, and Pierre-Emerick Aubameyang. The club also facilitated a few departures that were necessary to lighten their wage bill but could not find a suitor for Ousmane Dembele. 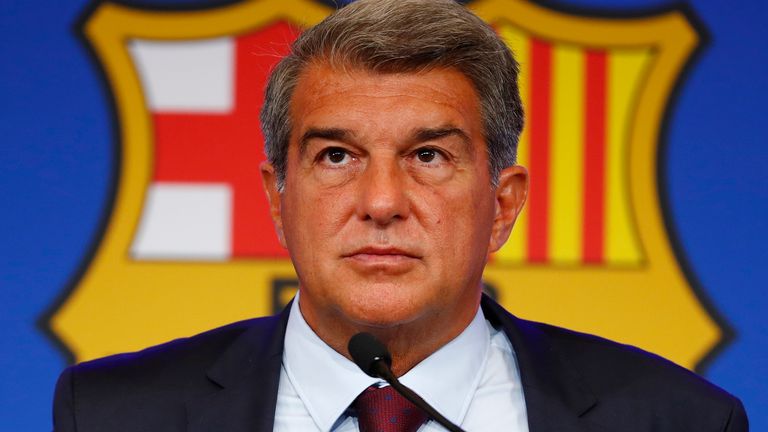 The Spanish giants endured a dramatic finish to the month of January, completing the signing of Aubameyang with only 2 minutes left on the clock. The former Arsenal striker has been successfully registered with La Liga and is believed to have taken a significant pay-cut. The Gabonese striker will sign for 18 months with an option to extend for one more year.

Dembele has failed to reach an agreement with Barcelona over a new contract and that has left the former La Liga champions unhappy. With that said, the Blaugrana have been considering sending the player to the stands for the rest of the season but it seems that the final decision could be left in Xavi’s hands.

President Joan Laporta even declared that the club had made him two attractive offers on the deadline day, and also relayed the offers made by two unnamed English teams. The player, however, shot all of them down, further complicating the situation. The club had been finding an exit for Dembele throughout the winter but with the player’s desire to continue at Camp Nou, they could not reach an agreement with any of the parties involved.

Numerous sources have revealed that Barcelona offered the Frenchman a 1-year contract offer which would see him earn approximately €14 million but the former Borussia Dortmund winger was not satisfied when it came to the financial terms.

When asked about the 24-year-old’s situation, president Laporta said, “Ousmane Dembélé won’t be here next season, I feel he has an agreement with another club – so it’s gonna be difficult to see him playing again with Barça”.

“Of course, Xavi will decide whether Dembélé will play again or not this season”.

Despite their woeful financial situation, Barcelona seem to have surprised everyone with their great financial recovery. Of course, the club has a long way to go before they get termed as a ‘financial powerhouse’ once again.

What is highly surprising is that Barcelona are bullish about their chances when it comes to signing Erling Haaland next summer. The former La Liga champions will be going against the likes of Manchester City and Real Madrid for the Norweigan striker’s signature but are convinced that they have the right ammunition to make Haaland their summer signing.

Barcelona president Joan Laporta when asked about Erling Haaland: “Haaland? Today we’re occupied and very excited with Aubameyang, who will score goals here. In June we will try to strengthen the team even more and we are on the right track”.

Ronald Araujo contract negotiations not heading in the right direction?

Ronald Araujo has turned down Barcelona’s first attempt at renewing his contract. The 22-year-old has been the shining light for Barcelona in a rather disappointing season. The Uruguayan defender’s contract with the former La Liga champions is until 2023 and Barcelona are not said to be in any mood to part ways with him.

Araujo has been the best defender for the Blaugrana this season and the player only seems to improve with each passing game. With that said, Araujo is one of the lowest earners at Camp Nou, with his current salary not even reaching €1 million.

The player is keen on continuing at Barcelona but is said to be demanding similar financial terms to those in Pedri’s and Ansu Fati’s contracts. The duo recently signed new contracts with the Los Cules until 2027. The idea at Camp Nou is to renew Araujo until 2027 as well, but for that, the club will need to find an agreement with the player on financial terms.

Liverpool and Manchester United are said to be attentive to the player’s contract situation and could look to cash in on Barca’s current financial troubles. The Kop have been linked with Araujo for a while now, with the 22-year-old being tipped as the perfect partner for Virgil van Dijk at the center of the backline. Now, as per reports, Manchester United have stepped in the race to sign Araujo and could offer Barcelona an attractive sum in the coming summer window, to sign the Urugyuan defender.

With the player said to be keen on continuing in Spain and in Barca colors, a summer departure for him looks unlikely and it is only a matter of time before he reaches an agreement with the club.