Only one day separate us from the second round of Premier League and consequently the second game week for out EPL Fantasy team. Meaning it’s time to go over our squad, switch out the roster and in our case replace the injured players. 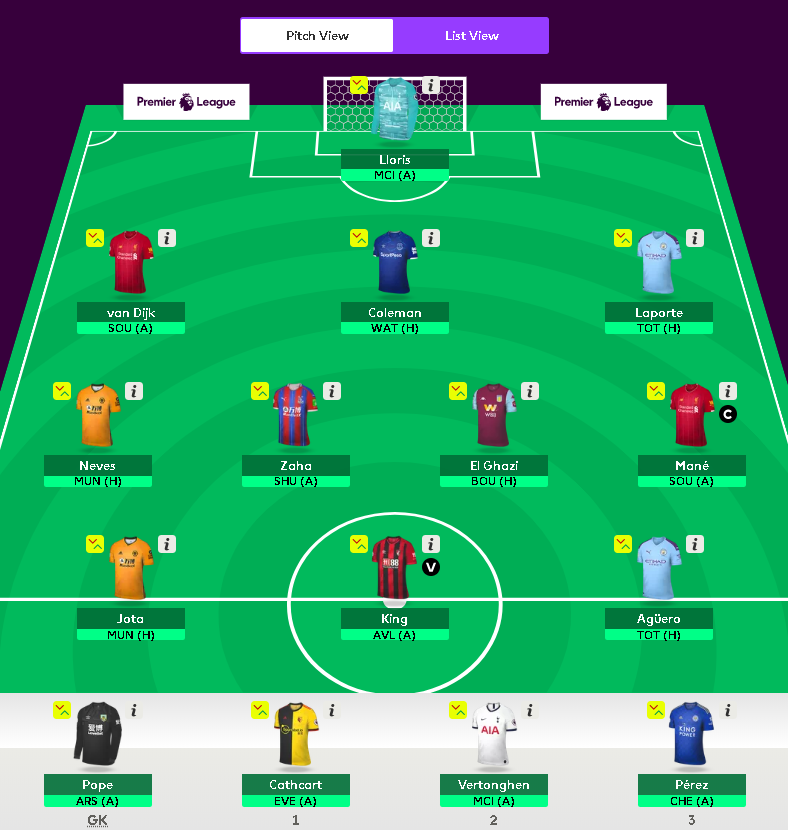 We have already talked about how previous week ended, and while we won’t go and repeat ourselves, we must start somewhere, and just like last time out, it will be with our goalkeeper, or shall we say with our new goalkeeper.

It’s not a secret Liverpool lost their goalkeeper last week due to an injury he suffered, which will leave him sidelined to an undisclosed amount of time. Alisson‘s injury while disastrous news for all Liverpool fans and football fans alike also proved to be terrible news for our Fantasy team as well, which needed to find a replacement.

After some tough, the final decision came to sign Hugo Lloris, who we have already talked about in our Fantasy Premier League tips. He has immense potential to be a solid pick for any fantasy team. For those still looking for a replacement and are not too keen on signing Lloris, both de Gea and Ederson are solid picks as Alisson replacement.

As for our defensive line-up, we will once again trust van Dijk, which will most likely be the case for all the season. It’s hard to argue the Dutch tower is anything but a phenomenal defender and a player, who will consistently earn us the much-needed points. To his left, we have Seamus Coleman, who we trust will prove his worth against Watford on Saturday. Everton proved to be a tough nut to crack against Crystal Palace and we do not expect that to be any different against Watford, who got crushed in week one against Brighton.

Last but not least, our third defender is Manchester City player Laporte, who has a tough match ahead, as the Sky Blues face off against Tottenham on Saturday. Following Man City incredible show in the first round, they are understandably the favourites, and while Tottenham and their attack are not to be underestimated, we believe Laporte will deliver.

At midfield, we have got Neves, Zaha, El Ghazi and Mane who will represent our team this weekend. Just like last week, we are once again putting our trust into Wolves to perform up to par. That might be harder as it seems, considering their next opponent is Manchester United, nonetheless, Wolves are one of the teams that can stand up even against the top six teams in the league. For that reason, Neves is our first pick.

To his right, we welcome back Zaha, who did not start last week but is expected to return this Sunday to take on Sheffield United, which could prove to be a great chance for him to showcase his skills. We might be a bit too optimistic here considering this will be an away match for Crystal Palace, nonetheless, we trust Zaha to deliver here and earn us a couple of points.

Anwar El Ghazi will join Neves and Zaha as the third midfielder, who we will hope can improve on his two-point game week one. To be fair to him and Aston Villa, they had to face off against Tottenham, which was never going to be an easy match. As for the upcoming game week, Aston Villa will get a solid chance to prove their worth, as they face off against Bournemouth. The match is expected to end in a couple of goals, and we would not be surprised if Anwar El Ghazi is involved in at least one of them.

Last, we have got Mane, who needs no special introduction. He did not start in game one, which resulted in only one point for our fantasy team, nonetheless, that will change this week. Mane scored twice on Wednesday against Chelsea in Super Cup, which clearly indicates he is in great form, meaning it would be silly to not start the Senegalese. We will trust Mane to reproduce what he showed against Chelsea, which is why he will once again earn our captain armband.

Jota, King and Aguero will be the three strikers representing our fantasy squad the upcoming game week.

Just like we have talked about above, we will hope Wolves can deliver against Manchester United on Monday, meaning Jota will have to be on top of his game to threaten de Gea. Will he be able to showcase his full talent is yet to be seen, nonetheless, we will trust him he can do just that.

Next, to Jota, we once again welcome back King, who will participate in what is expected to be a high scoring match against Aston Villa. In Bournemouth first match of the season, King played all 90 minutes but failed to get involved in the one goal his team scored. That, however, is no reason for concern as he is known to be very deadly with the ball. Should the opportunity arise for him to score his first goal of the season against Aston Villa, we believe King will use it to its full potential.

Last but not least, we have got Aguero, who did not start in Man City opening match of the season but still managed to produce a goal, meaning he earned us five points. While he got replaced by Jesus as the striker in the match against West Ham, the Argentine striker is expected to start against Tottenham on Saturday, where he will play a crucial role in what could be a very important win for Man City.

In our substitutions, we have got Pope, Cathcart, Vertonghen and Perez.

With that, we conclude our starting XI for the game week two. Last week did not end as well as we had hoped, but as said, the season is long and there is more than enough time to redeem ourselves. Will game week two be the week when that happens is anyone’s guess, so let’s sit back, relax and enjoy what Premier League has in store for us this weekend, while we cheer for our favourite team and at the same time keep an eye on how our fantasy squad performs.

In our league, nobody has more than 100 points, but it’s just a beginning and we believe it will be interesting until the end. 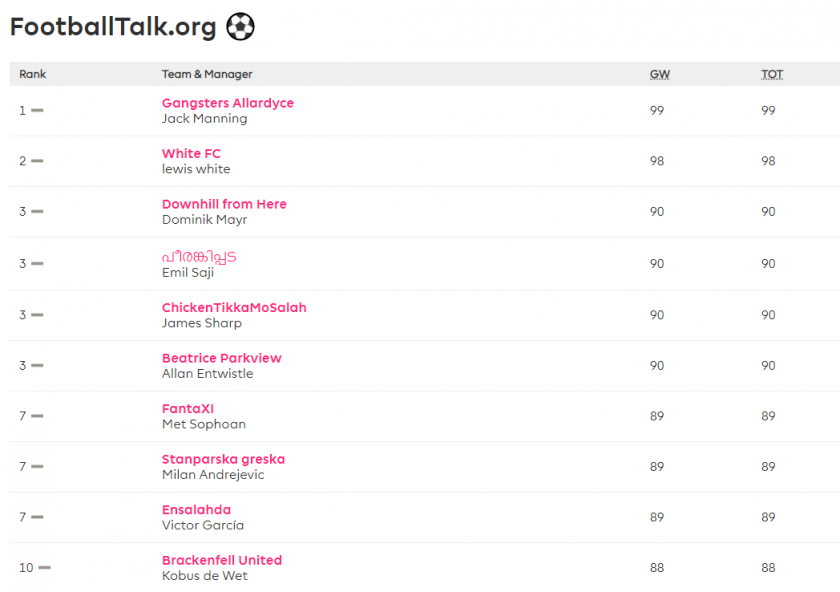 Gangsters Allardyce, the fantasy EPL team of Jack Manning, are standing at the top with 99 points. He decided to put Harry Kane at the beginning despite the fact that Spurs striker didn’t shine in the last few seasons in August.

At the second position is Lewis White and his team White FC with only one point less than Jack. The interesting fact is that Lewis made Harry Kane as captain and get 26 points, 2 more than Salah.

Good luck to everyone in the gameweek 2 and don’t forget “Fantasy EPL is a marathon, not a sprint“!