After a long wait, we finally got to witness the start of 2019/20 Premier League season last Friday. The season started with a fixture between Liverpool and Norwich and concluded on Sunday, August 11, with a match between Manchester United and Chelsea. With the first round of EPL behind us, we did not only get to see how the English teams compare against their opponents, but we also got to count our points in the EPL Fantasy, which was more forgiving to some than to others.

In our case, gameweek 1 could go much better than it did. Some surprise results on top of small mistakes played their part in it, nonetheless, the season is still long, meaning there is still more than enough time for us to come back and get in the winning rhythm. But before we check out our team, and how our players performed, let’s check out the team of the week or in other words the “dream team” of gameweek one.

De Gea and Rashford proved their worth against Chelsea, who had to kneel down to Man United in the last game of the week with a humiliating 4:0 defeat. They combined 23 points to whoever choose them for their team, which is an impressive number, but not as impressive as Burnley duo Pieters and Barnes. The Burnley defender and striker combined 27 points with a spectacular performance against Southampton, who against all odds lost 3:0.

While we talk about successful duos, Sterling and Mahrez from Manchester City combined 34 points, with Sterling emerging as the most successful player of the game week one (20 points). The reigning champions demolished West Ham in game one with a 5:0 away win to get their wheels rolling early, as they look to win yet another EPL title.

Now to our team and how did our players perform. 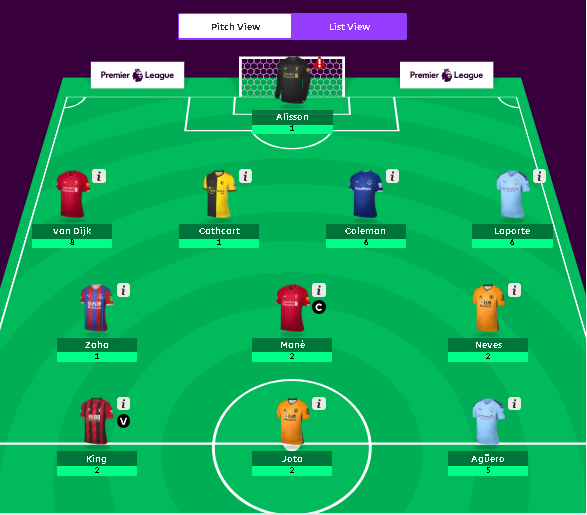 Starting off our list, we have got Allison, who ended with only one point to his name and a calf injury, which resulted in him leaving the pitch early. His injury is a huge blow to the Liverpool and for our Fantasy team, as he is not expected to return anytime soon, meaning we will need to find him a suitable replacement ahead of game week two.

Our defensive line, which consists of van Dijk, Cathcart, Coleman and Laporte combined 21 points, which was not as much as we had expected, nonetheless still a solid performance. Liverpool defender brought us a total of eight points, Laporte and Coleman followed with six each and Cathcart with only one.

Moving to the midfielders, there was a lot that could go better for us and for our three players as well. Zaha, Mane and Neves combined a total of five points, which is a very underwhelming result. Both Zaha (1) and Mane (2) did not start the match, which hurt our chances to earn a decent number of points. Neves on the other side earned us three points minus one due to a yellow card he received against Leicester. Seeing how Crystal Palace failed to utilize their chance to score a goal against Everton was rather disappointing, and the same can be said for Wolves performance against Leicester. While the match was never considered to be an easy one for Wolves, we did expect a better show from a team that has proven last year they can compete against the top dogs.

While we talk about Wolves poor show against Leicester, we can move to our attacking line which featured Jota, King and Aguero. King earned us two points with no goals to his name. His team, Bournemouth failed to defeat Sheffield United at home stadium, where they produced an underwhelming 1:1 draw. Jota and Wolves, as we have mentioned failed to perform up to par against Leicester, leaving him with only two points to his name. Last but not least we have got Aguero, who came on for his team later in the game but still managed to score a goal, which meant he was our most successful striker with five points to his name.

Overall, our team combined 36 points, which to be fair is nothing to be proud of. Some players performed up to the expectations others failed miserably. Most of all it was Wolves who we have put a lot of hopes in, which backfired badly. Despite that, we are nowhere near done with the season and our fighting spirit is still very much alive.

To round up our game week one, some mistakes have been made, but nothing that can’t be fixed. Looking at the results and performances of the players, we can assure our fantasy team will see some changes and fixes ahead of game week two, hoping for better results as the season progresses. Which changes that might be, we will reveal in the next post, so keep tuned as we dust ourselves off and get ready to fight our way through unforgiving world of EPL fantasy.