Round 18 of English Premier League is on the horizon, which means it’s time for our EPL Fantasy team GW 18 preview and FPL tips, where we unveil our roster, which will represent our team next week in hopes to break our current season record of 77 points, which we earned in week 16. SO without further ado, let’s jump right into our preview. 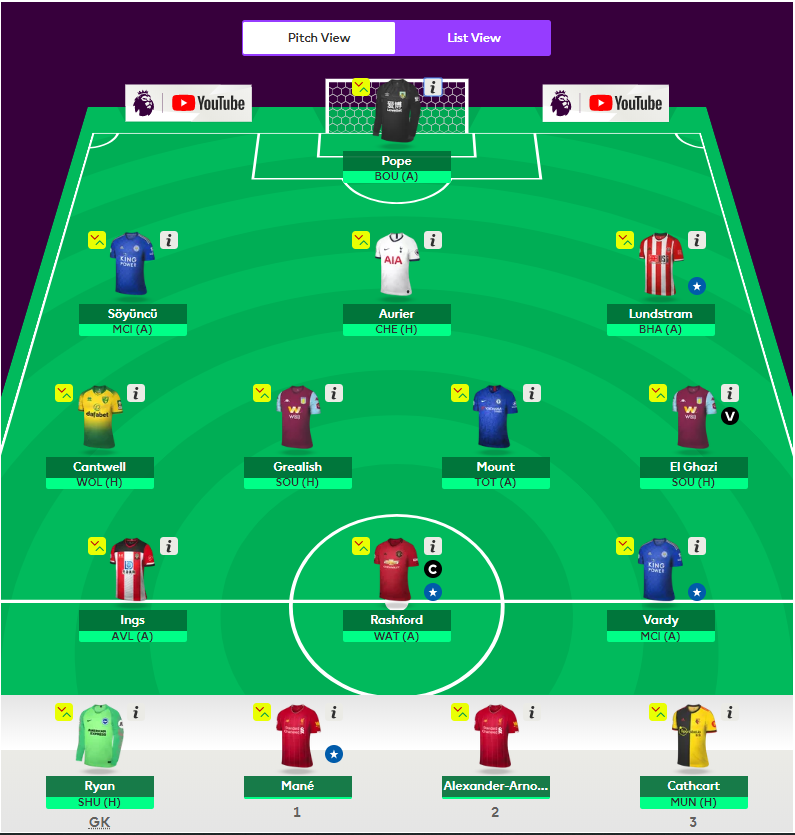 When choosing our goalkeeper, we faced a tough task picking between Pope and Ryan. Pope and Burnley will take a trip down to Bournemouth, while Ryan and Brighton will play a host to Sheffield United. After some careful consideration, however, we decided to go for Pope, who we believe has a better shot at earning some points as compared to Ryan who will clash with Sheffield Utd who are playing well as of late.

For this game week we have Söyüncü, Aurier and Lundstram as our three defenders who will represent our team. Liverpool’s match with West Ham was postponed, which forced us to sit out Trent Alexander-Arnold, which is unfortunate, yet we will keep our faith in the remaining three defenders to deliver. Söyüncü will have a tough task of defending Leicester’s goal against Manchester City, however, with the poor form of the Sky Blues, we would not exclude a possibility Leicester can deliver and upset the reigning EPL champions.

Aurier is in a similar position, seeing how Tottenham are facing Chelsea. That being said, Chelsea have not been too good lately which leads us to believe Tottenham could make waves and claim some nice points, and we will count on Aurier to deliver once more. Lundstram is our third and final defender, who will see his team Sheffield United travel to Brighton for an exciting clash. He has been just phenomenal as of late and we have no reason to believe he won’t continue his streak this week. We have Sheffield to walk away from GW18 with a clean sheet while Lundstram continues to show he can do some damage in the attack as well. Suffice to say we expect great things from one of the best defenders of the season.

Since Liverpool and Mane won’t be playing this week, we had to swap our midfield around a bit and ended up with Cantwell, Grealish, Mount and El Ghazi.

Cantwell remains in our team until further notice, and while he was not too solid recently, we have decided against spending an additional four points just to swap him out. He will face off against Wolves and while we don’t expect any surprising results from Norwich, they have significantly improved since Pukki started scoring goals, which leads us to believe there is a chance Cantwell can get involved in some points. Next to him, we have Grealish and El Ghazi, who will play a host to Southampton. As we see it, it could be a match with plenty of goals and should Aston Villa score Grealish will surely be involved. El Ghazi on the other side can have his moments, and we will hope such a moment will come this week.

Mount is our fourth and last midfielder, who did not impress in the last two rounds, where he failed to earn more than two points. Chelsea have not been too good lately and while there are surely better options than him, swapping him out would need more than just one transfer, and for that reason, we opted to keep him in here and look to possibly implement some changes down the line.

For this week we have a new addition to our team. We opted to swap out Kane for Rashford, who we believe can do some serious damage in man United’s clash with Watford. With taking Kane out, we took a major risk, yet we believe that risk can pay out big. On the other side, it can also backfire. Other than Rashford, we also have the returning Ings and Vardy. We expect great things from Ings, partially because Dean Smith’s men conceded the most shots in the box over the last four fixtures, which will help Southampton and most importantly Ings to get off some easy shots.

Vardy, who is our third and last striker needs no special introduction and while he has a very tough match ahead when Leicester plays Manchester City, we still have hope he can deliver and come out with a nice sum of points. Despite that, we have decided against making him the captain and rather go for Rashford for this week.

In our substitutions, we have got Ryan, Mane, Trent Alexander-Arnold and Cathcart

And just like that, we are at the end of our Fantasy team GW 18 preview. There are some major changes in our roster, mostly because Liverpool are skipping their match this weekend, which means we had to sit out both Mane and Trent Alexander-Arnold. While we can expect this to harm our total point tally, we are confident our team heading into GW18 is more than ready to earn some nice points. A lot will come down to the Leicester versus Man City fixture, as well as Aston Villa versus Southampton, seeing how we have five players involved in those two brawls. We might not pass 77 points this week, but we are more than ready to be surprised.