Another weekend is closing in and with it another round of EPL Fantasy league, meaning it’s again time for us to provide out EPL Fantasy tips for GW 14, where we show our team and our thinking process behind picking the team as well as additional suggestions on which players we believe will perform well next round. So without further ado, let’s jump right into our EPL Fantasy gameweek 14 preview. 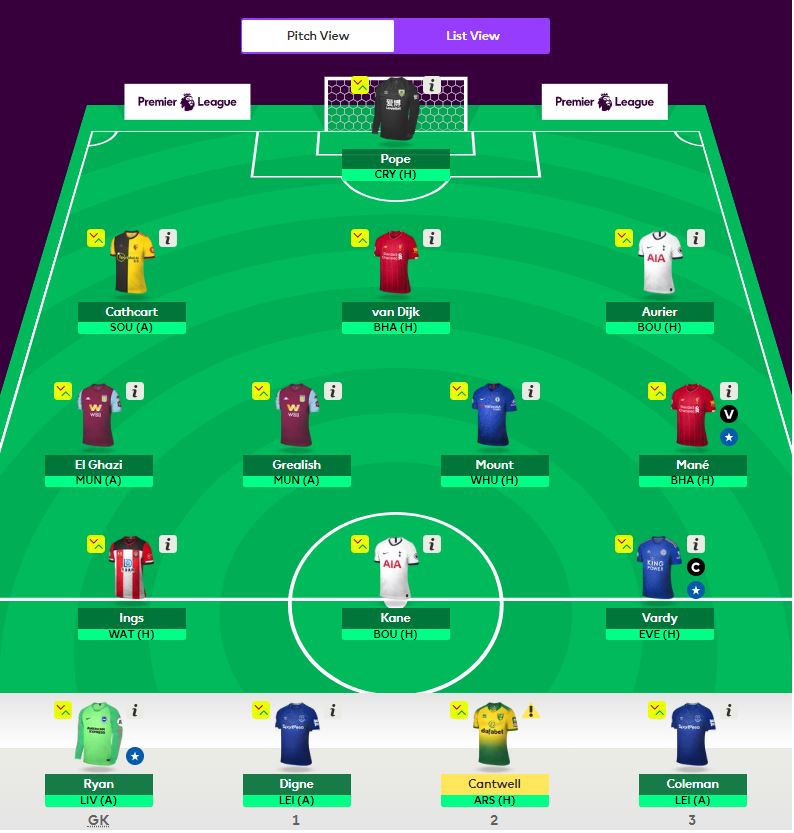 The decision between Pope and Ryan is again an easy one, seeing how Ryan will be defending his net against the fiery Liverpool, while Pope is set for an easier task as Burnley meets with Crystal Palace. It goes without saying, Pope will be our goalkeeper for this game week once more. He has been earning some solid numbers in recent weeks, claiming nine points in both rounds 12 and 13.

Three defenders in our lineup this game week – Cathcart, van Dijk and Aurier. Aurier is our new addition to the team, and with Tottenham back on the rise and his involvement in the attack, we will trust him to produce a solid result in the upcoming game week. Tottenham will also face Bournemouth, which should not be too hard of a fixture to win for the reborn Spurs, who have a long way ahead of them to bounce back from a poor start. Van Dijk, as always will remain in our team. Liverpool played against Crystal Palace last weekend, and while they failed to keep a clean sheet in a while, we will hope this will change this time. We are of course also hoping for van Dijk to do some damage in the attack if given a chance. Cathcart as our final defender is in the squad simply because we have no better option available. He will defend his goal against Southampton, which should be a tough match for Watford and Cathcart himself.

El Ghazi, Grealish, Mount and Mane will remain in our squad for one more week. El Ghazi and Grealish will travel to Manchester to clash with the Red Devils, where, we would not be surprised if Aston Villa manages to put up a show. Man United have been performing terribly in recent weeks and we see no reason why Aston Villa won’t be able to give them a run for their money. We expect some returns from both players, especially Grealish, who has been heavily involved in Aston Villa’s attack as of late. Mount remains in our lineup for Chelsea’s bout with West Ham United, where he will look to relocate his lost form, which has earned him a rather underwhelming five points in the last three fixtures. Last but not least is Mane, who we expect will produce some heavy return with Salah’s ankle injury. Mane will be the main man to score goals for Liverpool and seeing how they are facing Crystal Palace, we can expect at least one goal from him.

Our attack has two new players in it – Kane and Vardy. Due to unfortunate circumstances, which left both Aguero and Abraham injured, we were forced to swap them out and with both Vardy and Kane available with our remaining budget, we did not think twice before getting our hands on them. Both have been just exceptional this season and seeing how Tottenham swapped out their coach, we can also expect the Spurs to improve and start performing on a higher level. Kane will face off against Bournemouth, while Vardy is set to do some damage against Everton. Both fixtures promise goals and we will hope we can cash in on some points here. The third striker is Ings, who has been solid in recent weeks and we will continue to expect great things from him. He has scored a goal in both round 12 and 13, and we can safely assume another could come in Southampton’s meeting with Watford.

In our substitutions, we have got Ryan, Digne, Cantwell, and Coleman

With that, we conclude our fantasy EPL GW14 preview, which will feature a brand new team with some big additions. The biggest issue we had ahead of this game week was to pick out our captain, seeing how we have three players more than capable of producing some solid results. In the end, it came down to Vardy or Mane and we decided to go for Vardy here. It seems like a 50/50 pick and we will take our chances with the new arrival here. We are also putting a lot of hope into the Aston Villa duo, who will have a solid opportunity to make something happen against the struggling Man United. Other than that, we are aiming to claim at least 50 points, and if everything goes as planned, we can expect much more.