Another weekend has passed, meaning it’s time for another EPL Fantasy game week recap, where we look over how our team performed, what went right, what went wrong and how we did compare to last week.

In short, our game week four performance resulted in a noticeable improvement compared to last week, yet it could have been much better if we had double-checked our team and avoided making a simple mistake, which cost us eight points. But before we look over our team and what exactly went wrong, let’s check out the dream team of gameweek 4. 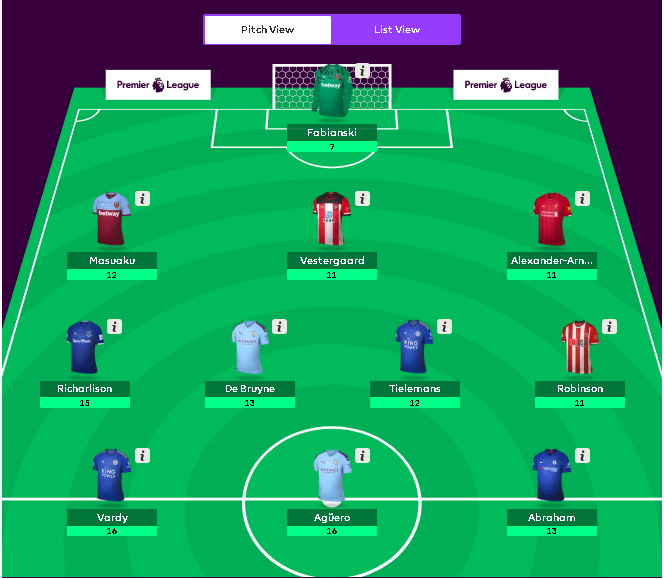 An impressive performance of West Ham’s goalkeeper Lukasz Fabianski earned him a spot among the best performing players of the week. By helping his team defeat Norwich (2-0), Fabianski earned seven points, which proved to be the most out of all goalkeepers the last gameweek. Joining him among the elite 11, it was his teammate Arthur Masuaku (12 points), who not only did an exceptional job in the defence but also helped his team score a goal by producing an assist. Next, to Masukau, we have got Vestergaard and Alexander-Arnold, who both walked away from gameweek four with 11 points to their name.

In midfield, it was Richarlison, De Bruyne, Tielemans and Robinson who proved their worth and emerged as the top four midfielders of the week. Richarlison (15 points) scored twice in Everton’s clash against Wolves, De Bruyne (13 points) produced a goal and assist in Man City’s match against Brighton, Tielemans (12 points) as well scored a goal and added an assist in Leicester fixture against Bournemouth, whereas it was Robinson (11 points) who played a crucial role in Sheffield United’s draw against Chelsea with a goal and assist to his name.

As for the attacking line-up, it was Vardy who woke up and produced 16 points, which he earned with two goals and an assist against Bournemouth. Joining him was the returning dream team striker Aguero with the same record (2 goals and an assist), which also earned him 16 points. Last but not least, the Chelsea forward, Tammy Abraham produced 13 points for the second game week in a row with two goals against Sheffield United.

In total the dream team of gameweek four earned 137 points, which is the second most up until now, only trailing the week one dream team which accumulated 142 points.

Before we get into our team recap, we have to mention our team did not look the same as we have said in our previous article. El Ghazi and Perez did not start the fixture, meaning they got replaced by Cathcart and Coleman. That being said, let’s look over how our team performed.

Lloris earned three points this past weekend with a 2-2 draw against Arsenal. We did not expect much points from Lloris this gameweek, yet he managed to accumulate a solid amount of points, which we do expect to increase next week, when Spurs host Crystal Palace.

Our defensive suffered a huge blow with Laporte leaving the pitch with an injury. Having played only 36 minutes, the Man City defender walked away from the fixture with zero points, leaving us with a huge point’s gap. Nonetheless, van Dijk (7 points) and Digne (5 points) both played well, and contribute a nice sum of points. Same, sadly cannot be said for Cathcart (1 point) and Coleman (1 point), who combined only two points this gameweek. A total of 14 points came from our defender, which is far from what we expected, nonetheless, still a solid result.

Mane and Neves remained the only two players to represent our midfield in gameweek four and it’s hard to be too disappointed with the performance. Neves sadly earned only two points in a 3:2 defeat against Everton, with no goals nor assists to his name. Mane on the other side earned eight points, with a goal against Burnley, which doubled earned us 16 points.

Unfortunately for us, Pukki failed to impress last weekend, with no goals nor assists to his name. It was understandably shocking to see Pukki walking away from the fixture with no goals, considering he has scored at least once in each of the last three EPL fixtures. In total, the Norwich striker earned us two points, which we will take and hope for more comes next week. Jota continues with his subpar results, as he once more failed to produce anything noteworthy. One point to his name from last week, which is far from our expectations and considering he has failed to make us believe he will improve, Jota could find his way out of our team comes next gameweek.

Last but not least, we have got Aguero, who, as we have predicted has had an impressive performance last weekend, when he scored two goals and added an assist to earn 16 points. While we are happy with his performance, we did make one huge mistake. As said in our previous article, we have decided to make Aguero the captain, as we did expect him to shine against Brighton. Sadly, we failed to double-check the team, resulting in our captain armband remaining on Mane’s hand. A simple sloppy mistake cost us eight points, which is without a say a rather big sum.

While a solid improvement from last week, this gameweek will be remembered for sloppiness when it came to locking in the team. Failing to move the captain armband was a costly experience and one we won’t forget. From now on, we’ll make sure to double-check everything and while I’ll never get those eight points back. We at least hope this lesson will remember our readers to do so, and avoid looking like a fool like we did this week.

There are no changes at the top of our Fantasy EPL league. “Downhill from Here” still stands at the top, but Ahmed Gnagy and his team “Gnagy” were impressive in gameweek 4 and collected 78 points. Gnagy believed in Aguero and his captain has made 32 points which were enough to move up at the second place and come close to Dominik Mayr.

Next week we will not watch the Premier League since the EURO 2012 qualifications will start tomorrow and will be a break in all Europan football leagues, so we will have enough time to think about our fantasy EPL team until 14 September when will begin the gameweek 5.