Richarlison was the name of the game against Serbia with two decisive goals, but a possible injury to Neymar worries Brazil. 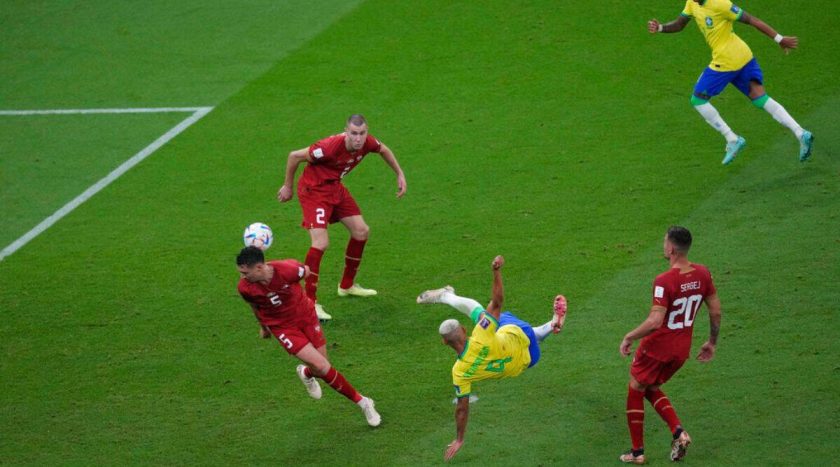 The last fixture of the first round of this World Cup was precisely the debut of the biggest favourite for the title. Brazil finally entered the field, against Serbia, the most difficult opponent on this group stage.

Serbia opted to fill the midfield with Lukic, advancing Milinkovic-Savic to the second row in the 3-4-2-1. Mitrovic was a centre forward. However, Vlahovic and Kostic were not fit and started on the bench.

In the first half, the Serbs surprised in the first 15 minutes with a high block marking, impeding the articulation of Brazil, annulling Vinícius Júnior and Neymar. The Brazilian team managed just four shots before the break, a number far below expectations.

In the following minutes of the first half, Serbia lowered the scoring and Brazil managed to flow better when Lucas Paquetá offered offensive solutions with passes and counters in Casemiro’s launches.

On the other hand, Serbia also failed to threaten Brazil with real goal chances through the direct connection and lack of speed in the counterattacks. Raphinha fulfilled her mission in the transition.

In the second half, Serbia came back with an intermediate block marking, calling Brazil to the offensive field. This time, Tite’s team managed a great performance and landed several shots before opening the scoring.

Neymar insisted on breaking lines and managed to take the opportunity to find Vinícius Júnior with space, crossing for Richarlison to finish with little space, winning the opponent’s marking.

However, the best moment of the debut was Brazil’s second goal, and one of the best goals of the current season. Vinícius Júnior shot at speed down the left and took advantage of the space to cross in the penalty area. Richarlison dominated and hit a bicycle, scoring the greatest goal of this World Cup.

Neymar’s important presence in attracting fouls and opposing marking was fundamental in the construction of Brazil’s offensive, occupying mainly the left side of the field. Therefore, concerns arise with the images showing the Brazilian star crying after feeling a calf injury.

Brazil forwarded its classification with the victory against Serbia, the main opponent in this group stage. Switzerland, who beat Cameroon 1-0, will be rooting for Neymar and Danilo to be absent for the next fixture.

For Serbia, the good news was the good performance of goalkeeper Milinkovic-Savic, with important saves especially in the second half, avoiding an even bigger defeat. Serbs need to focus on the direct duel against Switzerland.