And that’s a wrap. The longest season in Premier League history has finally drawn to a close, and what a strange one it’s been. Even if we look past the three-month-long break this season had to endure, the one-horse title race, huge points gaps between the top 3 teams and series of bizarre results (Southampton 0-9 Leicester comes to mind) all make this a pretty difficult season to assess. It will no doubt live long in the memory as the year Liverpool’s title curse was finally broken, but outside of that, it’ll be interesting to see how this season will be looked upon by Premier League fans in the years to come. But in the present, it’s time to review July, one of the most jam-packed months of league football I’ve ever seen, and pick our final team of the month for the 2019-20 season.

Team of the month July 2020 in Premier League 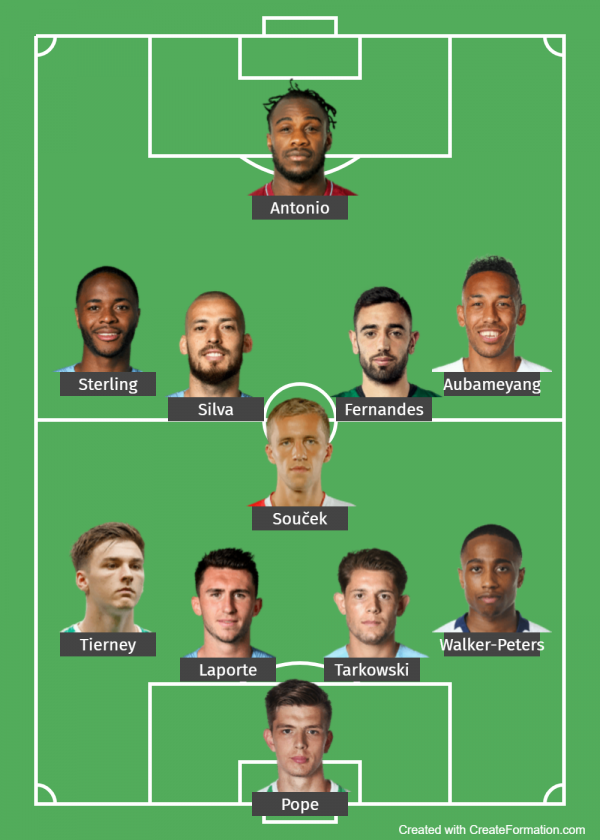 It’s been another wonderful season for Nick Pope, who has bounced back from an injury-ravaged 2018-19 season in some style this time around. He has matched and arguably surpassed, his finest form from his breakthrough season two years ago. His form in July was magnificent, particularly against Liverpool at Anfield, as the calls for him to replace Pickford in the England goal grow ever louder. Narrowly missed out on the Premier League Golden Glove, but 15 clean sheets this season is still a sensational achievement for the Burnley keeper.

Southampton have long been unrecognisable from the team that struggled terribly at the start of the season, and ended their campaign with an impressive 7 match unbeaten run, finishing 11th. Their loan deal for right-back Kyle Walker-Peters has proven to be a masterstroke, with the defender looking assured and dynamic down the flank. If Saints can sign him permanently, it will be a very good move indeed.

As good as Nick Pope has been lately, he hasn’t been alone in being a standout player for Burnley, with star defender James Tarkowski having also had an excellent July. The centre back has played a key role in Burnley’s successful season and his defensive partnership with Ben Mee is only going from strength to strength. Overall, he helped his team achieve two clean sheets in July and scored in the draw against Sheffield United.

How much have Manchester City missed Laporte this season? The defender has spent the last few weeks playing superbly and demonstrating just how irreplaceable he is in that backline. Laporte marshalled a defence that achieved 4 clean sheets from a possible 6 in July, and even scored in the thrashing of Watford, as City finished a somewhat disappointing season in style.

It’s not been the best debut season in English football for Kieran Tierney, who has had to contend with a number of injuries during his first year in North London. However, the Scotsman has been another of the Premier League’s post lockdown success stories, and in the past month has not only been one of Arsenal’s best players but arguably one of the top defenders in the entire league. If he can kick on next season and stay fit, then the sky is the limit for the left-back.

It’s been a good few weeks for West Ham midfielder Thomas Soucek. The Czech international has turned out to be another hidden gem from the January transfer window, albeit one that has gone somewhat under the radar. Soucek has played a huge role in West Ham’s late-season turnaround, and his strong performances in central midfield were coupled with his aerial ability that saw him score 3 goals in July. West Ham have done very well to recently secure his permanent signature.

Where would Arsenal have been without Aubameyang this year? The Gunners captain resumed his usual tradition of scoring for fun whenever the football season is drawing to a close, having notched an impressive 5 goals and 2 assists during the July fixtures. He may have narrowly missed out on a second consecutive golden boot, but there is no doubt that Arsenal simply must keep him at the Emirates if they are to enjoy a better season next time around.

What more can we say about Bruno Fernandes? The superstar’s sky-high stock rose even further throughout the past few weeks, as Manchester United’s top 4 dream was finally achieved on the final day. Fernandes scored 3 Premier League goals and assisted 4 more in July. Without a doubt the signing of the season.

David Silva’s ride at Manchester City is over after a decade of service, and what a decade it’s been. The Spanish genius signed off in some style for his beloved City, scoring two wonderful free-kicks and assisting 3 other goals in his final month in the Premier League. An appropriate way to say goodbye from one of English football’s greatest ever imports.

Firing on all cylinders alongside David Silva for Manchester City was the ever-dynamic winger Raheem Sterling. With his mid-season difficulties now seemingly long behind him, Sterling was simply brilliant throughout July, scoring 8 times and registering his 4th Premier League hat trick. Will he keep up this brilliant form next season?

We’ve saved the best until last; just how do you describe that July from Michail Antonio’s perspective? Having only scored two Premier League goals all season, the Hammers striker returned an incredible 8 goals and 1 assist in July, including a stunning 4 goal haul at Norwich, in one of the best individual performances of the entire Premier League season. West Ham’s survival looked relatively comfortable in the end, finishing 5 points above the drop zone, but without Antonio, it would have been anything but.