Another weekend of English Premier League is behind us and while there are no drastic changes at the top of the league standings, we got to see the rebirth of Tottenham, who secured their fourth win of the season under the newly appointed head coach – Jose Mourino, who will look to salvage what can be salvaged this season.

Liverpool edge past Crystal Palace to keep up the tempo

Liverpool kept their streak alive this Saturday when they defeated Crystal Palace (2:1) and added their 12th won of the season to their record. While a solid win for Klopp’s men Liverpool failed to look as dominant as many expected, as it was a closely contested bout that seemed like it could go either way. In the first half, we saw Liverpool with the majority of the ball possession (68%), but they failed to use it efficiently enough to make anything happen. In total, Liverpool produced four goal attempts, but no shot on goal in the first 45 minutes. Crystal Palace on the other side shot the ball 1/5, which was slightly better compared to the visiting side, yet still not enough to earn them a goal.

The second half was much more action-packed, with teams showing much more on both sides of the pitch. Liverpool opened the scoring with a goal in 49th minute when Mane scored his eighth goal of the season. The match continued with both teams pushing for another goal, and while it all seemed like we won’t be witnessing another goal that night, Zaha had other plans as he scored in 82nd minute to tie the match at 1:1. Liverpool were on the verge of drawing their second match of the season, but in their own style managed to score the game-winning goal in the final minutes of the match. The man who saved Liverpool on that night was Firmino, who scored his fourth goal of the 2019/20 season in 85th minute.

Man City bounce back with a win against Chelsea

It would be hard to say Man City are not having a solid season (9-1-3) but in comparison to Liverpool (12-1-0), Man City are far from where they want to be. While Guardiola’s men did their best to catch up to Liverpool they suffered a crushing defeat in round 12, when they lost to Liverpool (1:3), thus further increasing the gap between themselves and the top spot in the league.

After losing such an important match, Man City were obviously crushed, however, that did not stop them from putting up a show in round 13, when they defeated Chelsea, who have been making waves this season. The said match started with the Blues scoring the opener in 21st minute but were unable to hold onto the lead for long. De Bruyne produced a response in 29th minute and Mahrez added his own contribution in 37th to get the hosts 2:1 up. Unlike the first half, which saw three goals, the second half much slower as neither side managed to produce a goal. The match ended with the scoreline set in the opening 37 minutes, meaning Man City won their ninth win of the season while handing Chelsea their third defeat. Overall, it was a close match, yet it was City who were slightly better. Hosts had 47% ball possession and shot the ball 4/15. Chelsea on the other side had 53% ball possession and shot the ball 2/11.

Rebirth of Tottenham, the downfall of Arsenal

Maybe it’s slightly too early to say Tottenham Hotspurs have truly been reborn, yet they have started a new chapter with the signing of Jose Mourinho as a replacement for Pochettino, who got sacked on November 19, 2019. In his first game in charge of Spurs, Jose Mourinho defeated West Ham (3:2) in what was a solid performance from Tottenham, yet we can’t praise them too much for conceding three times. Nonetheless, it’s an improvement and we can be sure Tottenham will grab any win they can get. With that win, Tottenham are now sitting at 10th place in the league, with a 4-5-4 record and 17 points. While winning the league is close to impossible, Tottenham’s ambitions to finish among the top five are still very much alive, seeing how they are two points adrift from fifth-placed Wolves and nine points behind fourth-placed Chelsea.

While the future looks bright for Tottenham, Arsenal fans cannot be too happy with what their team is producing lately. Arsenal entered round 13 holding onto a streak of four matches without a win to which they added another one this weekend when they drew with Southampton (2:2). With that, Arsenal are now 4-6-3 with 18 points next to their name and should they not find their rhythm soon, we could be seeing Arsenal drop down into the wrong side of the league standings. 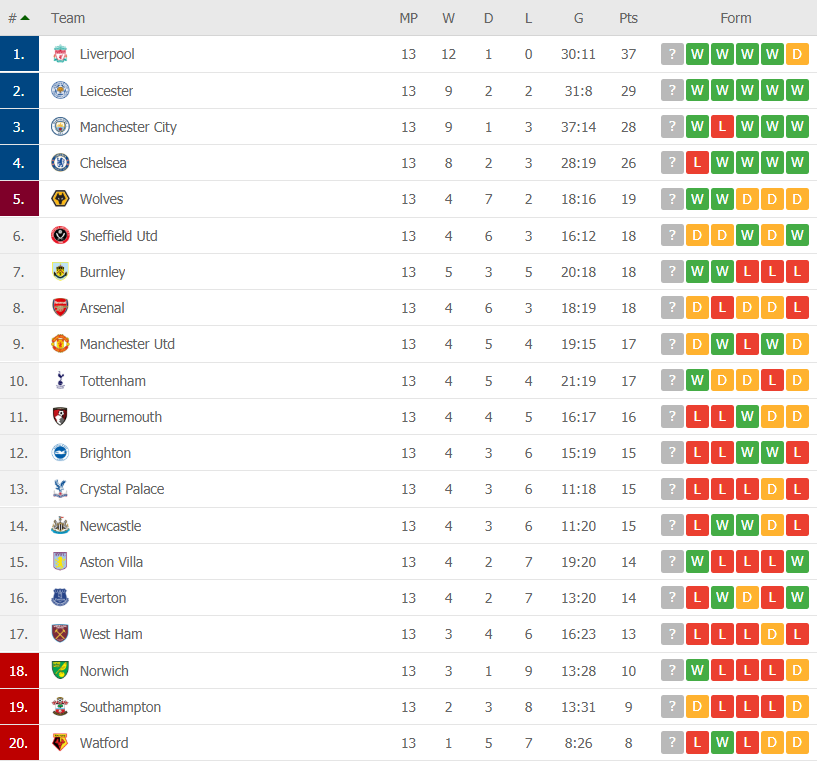 With round 13 finished, Liverpool still hold onto the top spot in the league with 12-1-0 record, followed by Leicester with 9-2-2, Man City at third with 9-1-3 and Chelsea now at fourth with 8-2-3. Wolves have seemingly found their rhythm and are on a rapid climb, which catapulted them from the bottom of the league to fifth place (4-7-2), where they overtook Sheffield United (4-6-3), who dropped down after playing a draw with Man United (3:3). While we talk about Man United, the Red Devils are sitting at ninth place with 4-5-4 record, which is one point behind Arsenal and one point ahead of Tottenham.