Tom Brady has rocked the NFL world again, and it seems a trip to watch Manchester United may have been the tipping point. Following the announcement of his retirement from American football earlier this year, which actually seemed uncertain when the news eventually arrived, the remarkable record-breaking quarterback has decided to make a comeback. 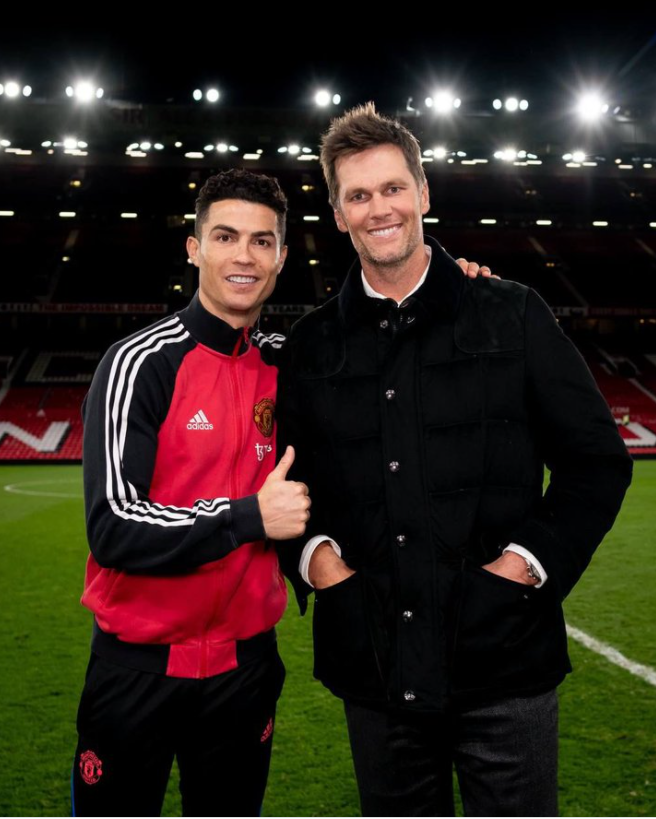 Getting to meet legendary former Manchester United boss Sir Alex Ferguson, the greatest manager of all time who led a life in landmarks and celebrated his 80th birthday last December, this was undoubtedly an inspirational moment for Brady, during his VIP visit for the game at Old Trafford. But coming face to face with superstar Cristiano Ronaldo may have played an even bigger part. The greatest scorer of all time in the beautiful game, chatted with the GOAT of the NFL at length, even questioning whether Brady had indeed retired or not.

Both the Tampa Bay Buccaneers and Manchester United are owned by the Glazer family, and last weekend Brady was in England watching the Red Devils take on Tottenham Hotspur at Old Trafford. Whilst there, the 44-year-old who everyone thought had played his last game in the NFL, met inspirational figures including the greatest manager of all time, Sir Alex Ferguson.

The Scottish managerial icon won everything there was to win at Manchester United, leading the club for 26 years. While the most memorable moment of his coaching career is undoubtedly the 1999 UEFA Champions League win, when Teddy Sheringham and Ole Gunnar Solskjaer scored stoppage time winners to clinch the trophy, Ferguson was the mastermind behind numerous trophies.

Thanks to @ManUtd and the Glazer family for hosting me and my boys yesterday. So lucky to be able to share experiences like this with them. pic.twitter.com/GDofXNZpfW

Over the course of 1,500 matches in charge of the team, Ferguson led Manchester United to 895 wins, 338 defeats, and 267 draws, setting a benchmark of 59.7% victories during his lengthy tenure. On the domestic scene, Ferguson won the Premier League a record 13 times, along with 5 FA Cup wins, 4 EFL Cup wins, the FA Community Shield on 10 times.

On the continental and global scene, Ferguson was the inspiration behind his team reaching the UEFA Champions League on four different occasions, lifting the famous trophy twice. Nevertheless, his first continental title was the European Cup Winners Cup in 1990-91, followed by the European Super Cup in 1991. The Intercontinental Cup was won in 1999, then the FIFA Club World Cup almost a decade later in 2008.

Getting to meet the man who remains the greatest football manager of all time, that must surely have been one inspirational moment for Brady and his family. However, after the current Manchester United team battled to a priceless 3-2 victory against Tottenham Hotspur, the legendary American football figure got to meet another VIP.

Indeed, it was Portuguese superstar Cristiano Ronaldo who put on the most impressive show, netting a phenomenal hat-trick against Spurs, ensuring that Manchester United are still in the fight to secure a top four finish this season. Bookies remain undecided whether the Red Devils will achieve that objective, but for the most comprehensive odds comparisons, SBO has provided a detailed list of the best football betting sites in the UK.

Ronaldo knew about Brady before us 👀 pic.twitter.com/8dxeFu5MhN

Covering everything you need to know about the Premier League and every other competition, SBO covers the best value odds and best range of football betting market options, along with focusing on which sites have the most trustworthy track record. Likewise, there’s also a strong focus on educating readers, explaining how to place bets and regularly providing tips for upcoming matches.

After his game-winning hat-trick, out on the hallowed turf at Old Trafford, there was an interesting conversation between Cristiano Ronaldo and Tom Brady, which included the Portuguese soccer icon asking Brady whether he had actually quit American football. “You’re finished, right?” asked CR7, to which Brady responded: “Let’s see, one more…”

“I know, I know,” prompted Ronaldo and seemingly with a knowing smile, perhaps aware that after Brady had visited Old Trafford and spoken to such inspirational figures, it may have been the tipping point for such a hugely important career decision. Brady subsequently announced his decision officially, just a couple of hours later.

Proof that no matter the fact they have excelled in different sports, these two iconic “football” figures clearly share a great amount of respect for one another. Hopefully, we’ll get to witness Ronaldo banging in more hat-tricks at United for another year or so, while the NFL gets ready to enjoy another campaign with the Tampa Bay Buccaneers, who have already been installed as favourites to win the next Super Bowl, following his decision.