EPL Fantasy Tips for Gameweek 8 are ready for the upcoming weekend. They say time flies, and it really does, seeing how one-fifth of English Premier League is already behind us. And while that might seem like a lot, there are still 31 more rounds of top tier English football left for us to watch and enjoy. Talking about enjoyable football, round eight of EPL will serve us with some exciting fixtures, which we will hope will convert into successful gameweek for our fantasy team.

So without further ado, let’s look at how our fantasy team will look like heading into GW8. 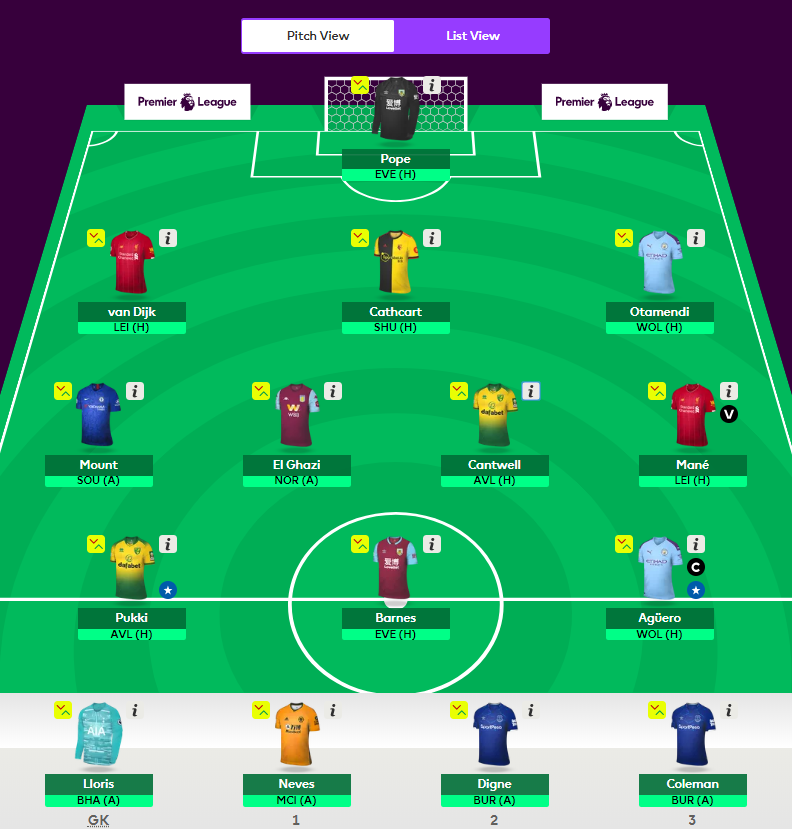 It’s hard to be too positive about Hugo Lloris and Tottenham following the trashing of Bayern Munich, who defeated Spurs 2:7 on Wednesday. While Bayern are far superior to Spurs’ next opponents in EPL (Brighton), we like Pope much more, as we believe he can bring us more points in Burnley’s clash with Everton this Saturday.

In our defensive lineup, we will stick with the same players as last week. Liverpool will clash with Leicester in what will be a crucial match for Klopp’s side, who will need to be on top of their game to derail the Foxes. Van Dijk played well last week against Sheffield, and we will trust him to do so again here. Next to him, we have got Cathcart who is coming off a disappointing 0:2 defeat against Wolves, however, there is a reason to believe Watford will fare better against Sheffield Utd on home soil comes this weekend. Our third defender, Otamendi will face off against Wolves, who have won their first match of the season last week, however, with their questionable scoring form and shaky defence throughout the season, we believe Man City should have fairly easy facing them. And should Wolves not be on top of their game, Otamendi could do some damage on the other side of the pitch as well.

In the midfield, we have decided to get rid of Perez and replace him with Mount, who has been playing very well for Chelsea and as it seems he has become Frank Lampard’s project, which could suggest he will get much more playtime. In addition, we like Chelsea’s visit to Southampton, who have been a bit shaky in the back. Next to him, we have El Ghazi, who we will trust to deliver once more. With a goal and an assist in last two fixtures, we like his chances to produce something in Aston Villa’s visit to Norwich, who have not been too impressive in the back, seeing how they conceded at least twice in last five fixtures. While we talk about Norwich, Cantwell remains in our midfield, as we hope he finds his rhythm this week. While Norwich are not too impressive in the back, we believe they have enough firepower to produce something against Aston Villa, who conceded five goals in the last two rounds. Last but not least, we have Mane, who has not scored a goal in the last two fixtures, yet we will continue believing in him he can pop off sooner or later. The upcoming clash with Leicester might not be the easiest fixture Liverpool had this season, however, if there is one player we will count on to deliver it’s Sadio Mane.

No surprises here. Pukki, Barnes and Aguero will remain in our attack, as the trio who we will count on to deliver goals. Pukki has scored a goal in the last two fixtures, yet we believe it’s time for him to wake up in Norwich’s clash with Aston Villa. We will count this fixture as his last chance to prove himself, and the same will go for Cantwell. Should they underperform once more, a transfer could be on the horizon as we don’t see any reason to keep ahold of a player who seemingly lost his touch.

Barnes is an enigma to us, seeing how he plays very well, yet fails to find his way to the net. That being said, we don’t feel like it’s time to change him just yet. Burnley will host Everton this weekend, which would be Barnes time to shine and we will surely hope that will be the case. And lastly, our captain, Sergio Aguero, who we believe can produce something against Wolves, considering how shaky Wolverhampton looked like so far into the season. That is if he gets enough minutes.

In our substitutions, we have got Lloris, Neves, Digne, and Coleman.

And we are once again at the end of our overview of our fantasy team and EPL fantasy tips ahead of the upcoming gameweek. All the spotlight, as far as our fantasy team is concerned, will be on Pukki and Cantwell, who we believe have a real shot at redeeming themselves this gameweek, and a lot of our success will come down to how well they perform. Then there are also Otamendi and Aguero, who we hope will deliver against Wolves, and should everything go as planned, we could be in for a very successful gameweek for us and our fantasy team.