It was no doubt an afternoon of mixed emotions for Borussia Dortmund. 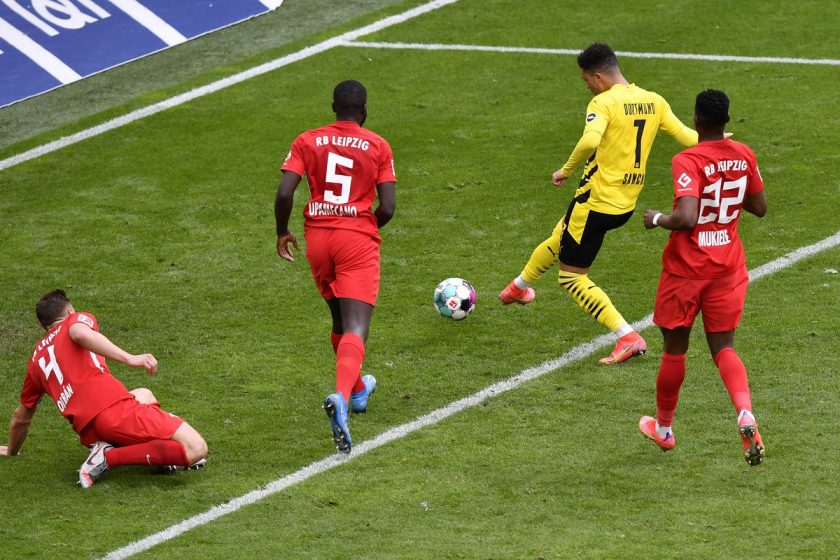 On one hand, they pretty much helped to hand the title to their rivals, but on the other hand, they managed to overcome second-placed RB Leipzig with a very late goal to come away with a win and all three points in their European push.

Without kicking a ball, Bayern Munich were crowned champions of the Bundesliga for the ninth consecutive season thanks to Dortmund running out as 3-2 winners against second placed Leipzig.

It was a game that could have gone either way when it was all square 2-2 with goals from Marco Reus and Jadon Sancho for Dortmund and Lukas Klostermann and Dani Olmo for Leipzig. But when it hit 87 minutes it was Dortmund who went in front when Jadon Sancho struck for all three points, all but crushing Leipzig’s hopes of a Bundesliga crown this season.

The game was a big one for both teams and it seemed as though Dortmund needed it more, given they are currently in fourth place on 58 points, two points clear of fifth placed Eintracht Frankfurt who have yet to play and are also chasing Champions League football next season.

But this game was also a trial for the main game in which they are scheduled to play in only a few days’ time for a chance to win a trophy for both teams in the DFB Pokal final.

Going into the game on Thursday, Dortmund is now in the driving seat and coming off of the back of this win their confidence is high no doubt. But as we have seen over the season, anything can happen at any moment in games. And given their current positions in the table, it is clear to see that Dortmund have been the most inconsistent, where they have struggled in games they should have won and will be wanting this win more than ever.

After the final though, Dortmund’s attentions turn to their games against Mainz who sit in 12th place on 35 points and Leverkusen who sit in sixth place on 51 points, and they will no doubt be looking to get six out of six points as they look to finish on 64 points to cement a place in Europe next season.

For Leipzig the best they can do is finish in second, however, if they lose both of their final games against Wolfsburg who sit in third place on 60 points and Union Berlin who sit in eighth place on 46 points, they could see themselves fall as low as fourth if Dortmund and Wolfsburg win both of their remaining games.

In a season that promised so much for Leipzig and so little for Dortmund, European football seems likely for both teams, yet only one will come away with a trophy this season and if the game is as good as round one, then it will be an exciting, nail-biting and eventful match that will see a new name on the DFB Pokal that doesn’t read Bayern Munich!